We are going to make this writing with sand sort of effect. The story behind this tutorial is; One day my manager asked me for spray or sand kind of effect. First I googled on the internet but I never found any kind of tutorial, After one hour of RnD, I came up with this effect which I felt was looking great, so I figured I would share it with you guys.

Every few weeks, we revisit some of our reader's favorite posts from throughout the history of the site. This tutorial was first published in October of 2009.

and make setting as shown below.

Now go to Layer > New > Solid and rename it “Particle_Layer” and set up the size, color and

duration as shown in illustration below. 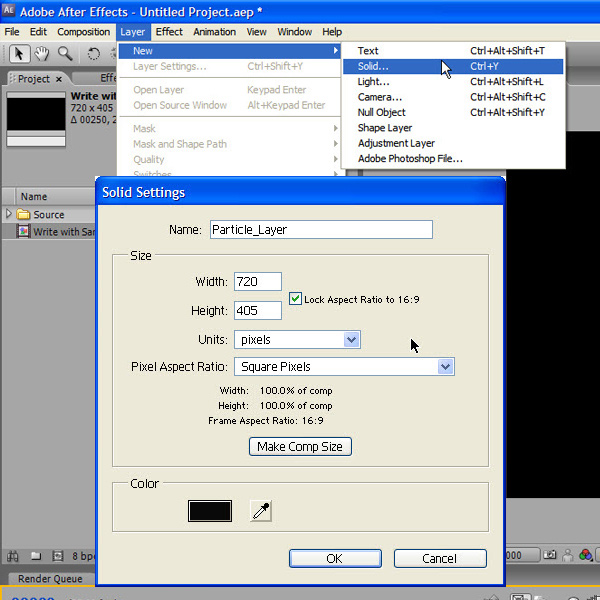 Particle_Layer selected go to Effect > Trapcode > Particular. Now we need a wall on which particles

will collide and stick to it. So, we’ll make another solid, Layer > New > Solid. Rename it “Wall_Layer”

and make sure the setting is matching to Solid setting dialogue as shown, and click OK. 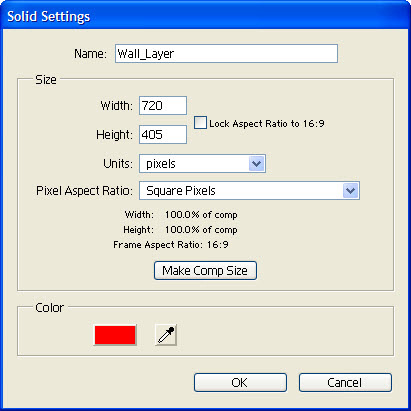 Fine, now for our convenience put (drag) the “Wall_Layer” below the “Particle_Layer” and hide its

visibility and turn it into 3D layer.

Air to Bounce. Collapse the bounce section within the Physics tab and change the Wall layer none to

Wall_Layer and ‘Collision Event to Stick’. Keep rest of setting as it is. 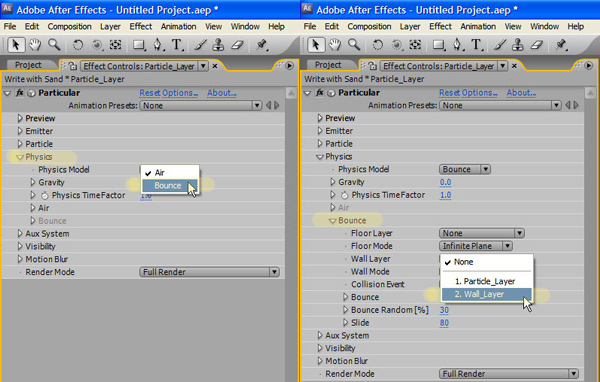 Create Layer > New > Light name it “Emitter” and keep the setting as shown in illustration down. OK,

now and select the Particle_Layer and change the emitter type to ‘Light’. Now instead animating light 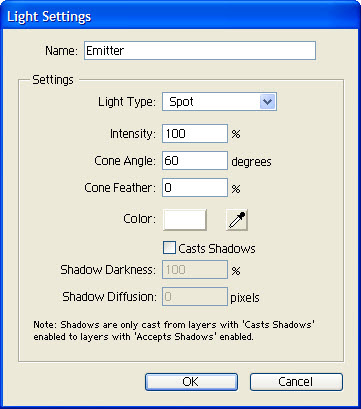 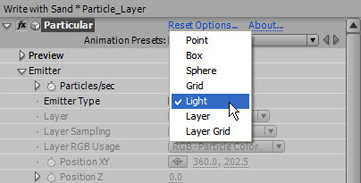 To create a mask path I am using AE TUTS+ logo. (For reference I downloaded the logo from site)

Composition > New composition and rename it “Logo_Mask” and make setting as shown below.

we usually write on paper. After one letter finishes, start next letter without changing mask even

when there is no connectivity between the letters. Keep drawing until the logo gets finish. Here is

what we’ll end up with.

OK, now our mask is ready to use. Go to ‘Write with Sand’ composition and create a null object

Layer > New > Null Object. Turn it in to 3D layer and make sure that the null object is having the

same position as Emitter layer, if not select both the layer in timeline window and hit P on

Instead of animating our light layer we’ll link our Light to Null object. To do this drag the pick whip

layer by pressing M key twice, Click on the ‘Mask path’ and Edit > Copy. Now again go to Write with

and use Edit > Paste.

attributes as illustrated below. 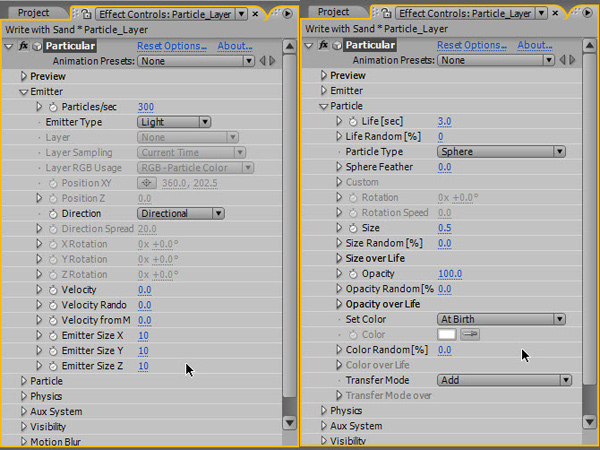 Now our efforts getting shape slowly! But not that strong; we need lots of particles! Instead increasing

particles are dieing before completing the logo. To fix that go to Particle section and increase the value

of Life [sec] to around 100. Yes! Now we are able to see complete logo. Not smooth enough but OK.

We’ll fix that weirdness in next step.

By pasting mask-path to null-object-position we got the keys. The total duration of keys is around 50

frames. We want it around 225 frames, to extend that, Select Null 1 layer, hit P on keybord to reveal

its position properties, select all keys; now hold down Alt key and drag the last key of animation till 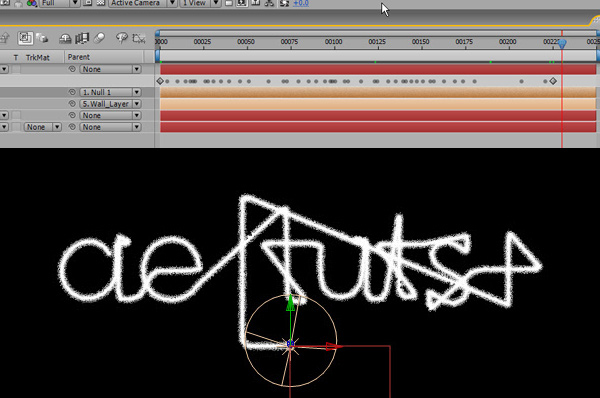 Hit 0 key for RAM preview to see what you got. We are almost there! Fine, Now we need to cut the

extra strokes than the letters and make our logo clean. Move your timeline indicator exactly when the

panel within Particular Effect and click on stopwatch to animate the Particles/sec, to reveal animated

property of Particle_Layer hit U on keyboard. Hit Page Down key on keyboard to go to next frame,

(frame 27th). And change the value of Particles/sec to ‘0’. Basically what we are doing is, we’re emitting

emission ‘0’. Again go to the timeline when letter E is about to start (in my case frame 30th) and add a

keyframe at current time with 0 value. Press PageDown key on keyboard to go to next frame (frame 31st)

and again increase the Particles/sec value to 300. Again go to timeline where E letter gets end and set

the Particles/sec value to 300. Keep doing the same thing until end. And here is final result.

Good! Logo-animation done but still some of particles needs to be fall and thickness of letters should

be even more. To do that, increase the value of Gravity to 2. And what?! all particles are falling down

Still result not that good enough. Particles are flying in space dramatically. To fix that select ‘Emitter’

layer in composition timeline, hit P on keyboard to reveal the position property and adjust the Z

position to something around -23. Awesome! Exactly, what we’re looking for. Try RAM preview.

‘Set Color’ property of Particular to ‘Over Life’ from Particle section. And second way is ‘Random

from Gradient’ from same drop down menu. But in both the case we won’t get the color per

character as well as we can’t animate the colors in particular while using light emitter.(But before 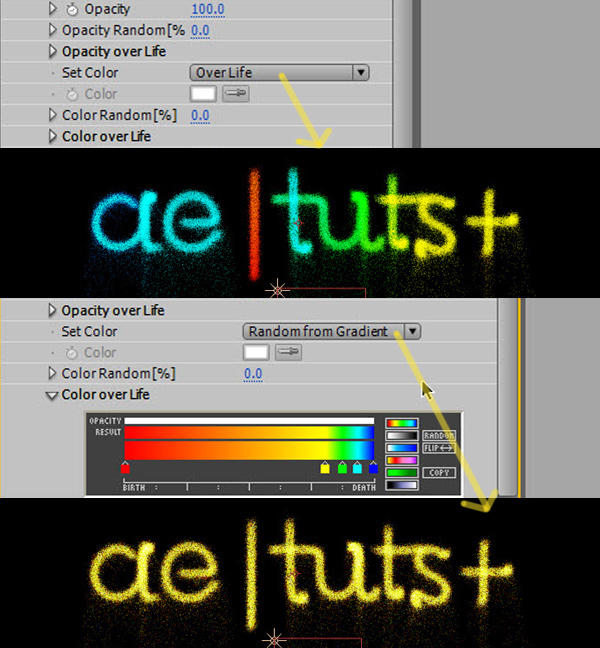 Don’t worry! Here is the solution. Animate the light color! So go ahead and reveal the ‘Emitter’

Yes you’re right! We are going to animate the color of light according to start and end of character

letters (as we animated Particles/sec value). To animate color, move your timeline indicator till ‘A’

Red. Press PageDown key and change the color of light to Green. Drag the timeline indicator till letter

E will get start and add a keyframe with same green color. Press PageDown key and change the color

of light to Blue. Keep doing same thing till the end and choose the colors which you like and there we are!

To match look and feel with the final video preview, use the following tricks. Double click on ‘Emitter’

(light) layer and change its intensity 100 to 250. This is good trick to increase no. of particles. Select

After completion of tutorial keep tweaking attributes and let me see if you found something intresting. 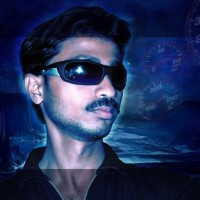