Use Lights To Project Your Logo

This tutorial basically involves three things that could be useful - Use of Light Projections (text projected onto white solids), Text Writing with particular and Use of Exported Camera from cinema 4d. There are some good principles you can take from this example.

Start by making a new composition with whatever settings you prefer. Call it Main_Comp. 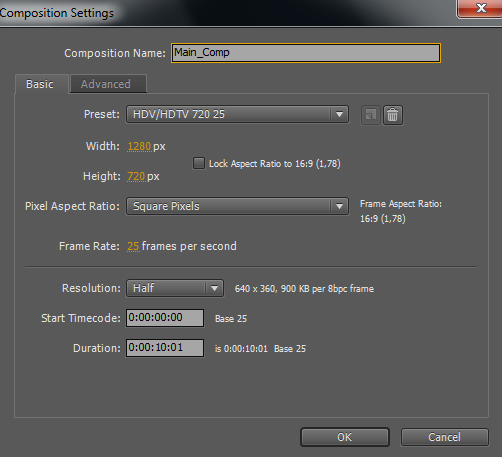 Next, make a new Text Layer and type in anything you want to. I'll use Arial Black but use of other, more funky fonts can result some cool looking outcome.
After that, right click onto that Text Layer and choose Create Masks from Text. At once, Outlines layer will be created and Text Layer's visibility turned off.
Save. 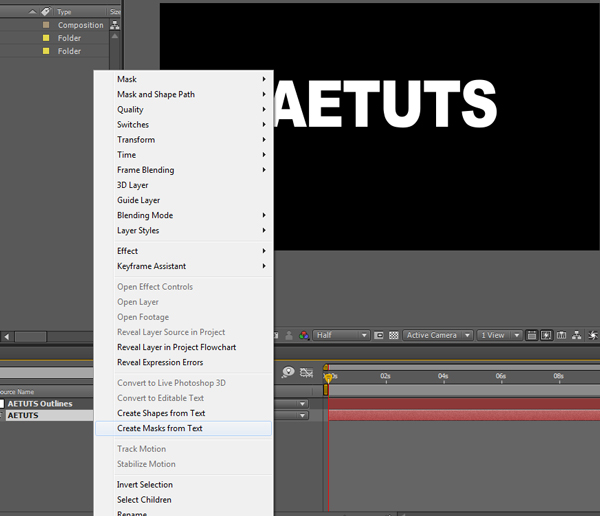 The idea is to use those masks as paths for emitting particles. We'll not use Null Objects but rather Lights to avoid unnecessary actions.
Create a new Light leaving its Light Type to Point. Call it Emitter.
Now, you want every letter to animate separately so you'll need a separate emitter for each one of them. It's 6 letters for me so obviously I'll need 6 emitters but since letter A contains two masks I'll create an additional one.
Duplicate them and call them so the name wouldn't reapeat except for letters that contains 2 or more masks.
Save. 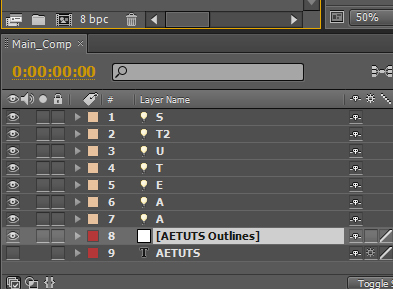 Now select AETUTS Outlines layer and press M to reveal only Mask Path properties. Then highlight all the Light layers and press P to reveal their Position properties.

You'll be creating Position path's from those Mask Path's now. To do that, just select one Mask Path and copy it by pressing Ctrl+C.
Next, highligh the desired Position option and paste by pressing Ctrl+V. Do it for every letter.
After that, you can turn off the visibility of AETUTS Outlines.
Scrub through timeline to see how they animate.
Save. 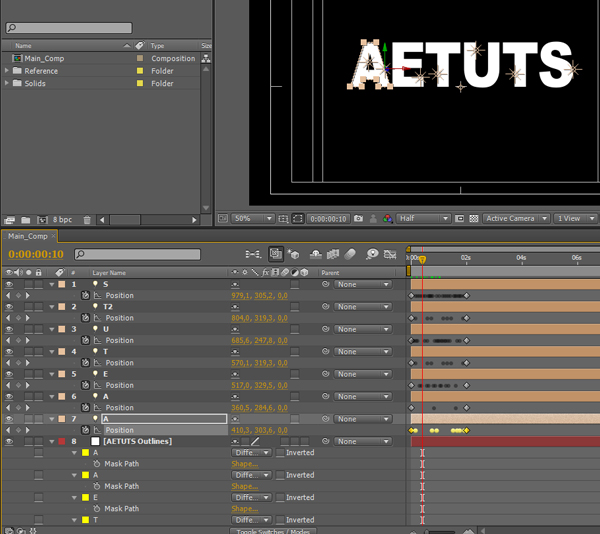 Further, make a new Solid (A Particles)and apply Particular to it.
Open Emitter submenu and change Emitter Type to Light.
Then, open Settings and change Light name starts with under Light Emitters to A.
This will tell particular to search any light in composition that starts with letter A and set it/them as emitters- thats why you don't want names to repeat.
In this case, Particular will set up both A layers as two emitters but with the same settings.
Save. 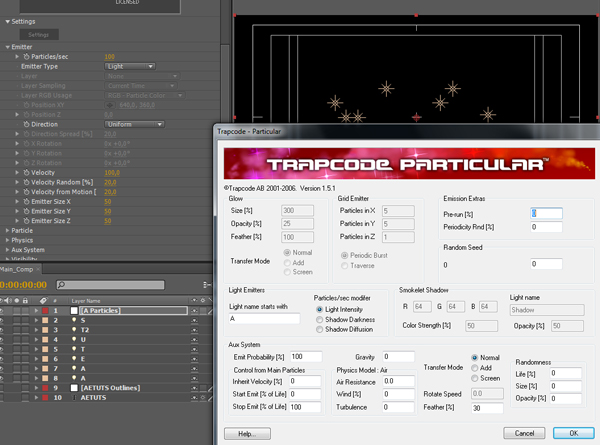 Change Veocity, Velocity Random and Velocity from Motion to 0. Also Change Emitter Size X, Y and Z to 0.
Scrube through timeline and you'll notice that the animation stops in 2 seconds. To fix this, you'll need to add this loop expression to every Light layer's Position: loopOut(type="Cycle") 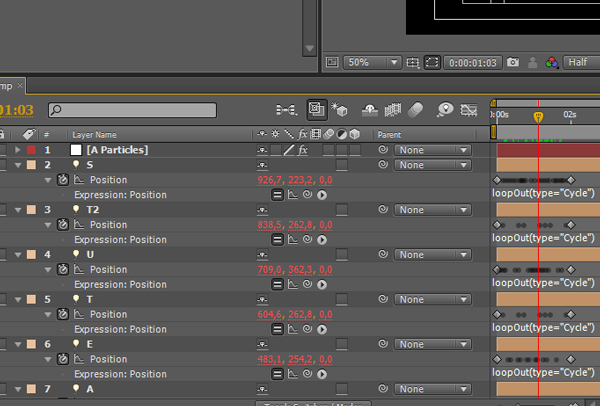 Select A Particles layer and find Turbulence Field under Physics>Air. Change Affect Size to 15 and Affect Position to 35.
This will make particles to randomly move around after they're born.
Change particle Size to 3.
Save. 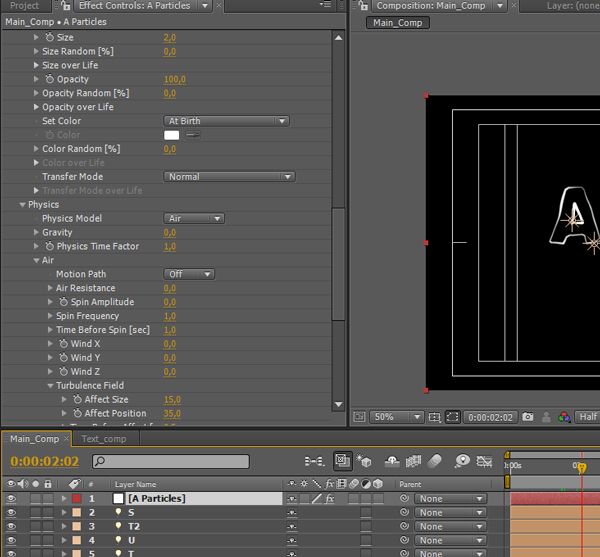 Under Emitter, change Particles/sec to 300.
Next, duplicate A Partilces layer five times and change their names accordingly to letters. Then, do the same thing with them as in Step 6 where you have to open Particular Settings and change Light name starts with to whatever emitter you need. Also, you'll have to rename T layer to T1 otherwise you may experience some glitches.
Save. 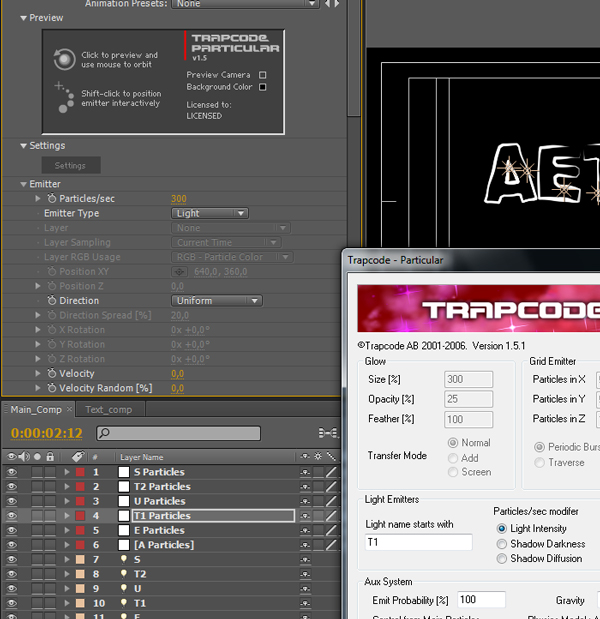 We have done with particle animations so now we have to add those reflection planes. Star by making a new white Solid and duplicating it as many times as needed. Then change their transformations and distribute them similarly as in screenshot. I lowered the opacity to see the text.
Save. 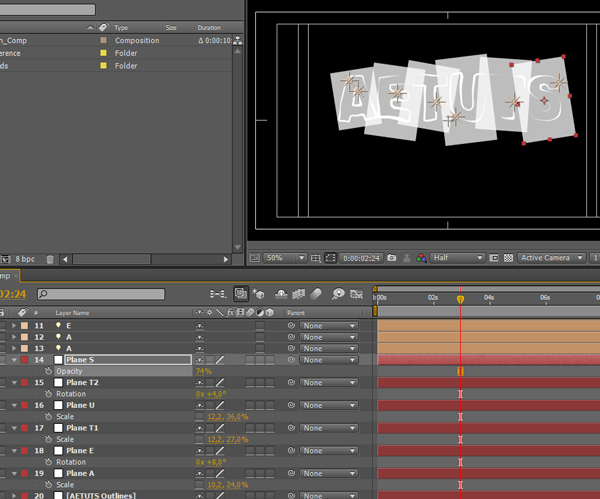 Make all the Plane layers 3d as we'll need them to move in 3d space. Solids will turn black but thats okay. Don't forget to crank up their opacity back if neccesarry.
Now, select all the Light and Particles layer and precompose them. Call the composition Title. 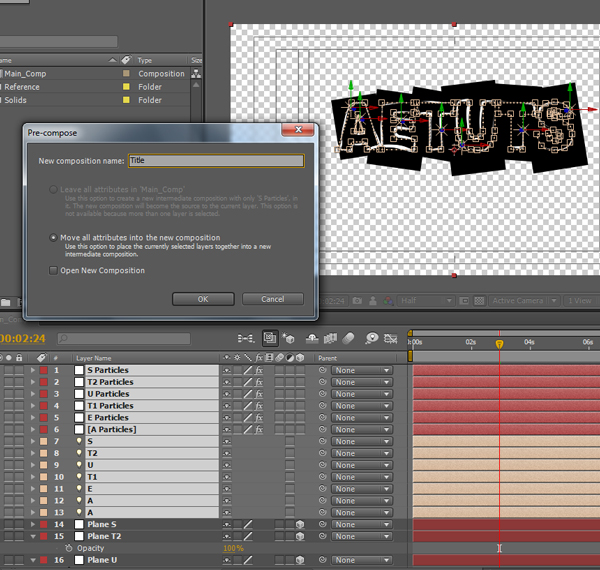 Turn Title composition into 3d layer.
Next, add a new Light with Light Type set to Point and Casts Shadows checked.
Open Material Options under Title and triple click on Casts Shadows value to set it on Only. 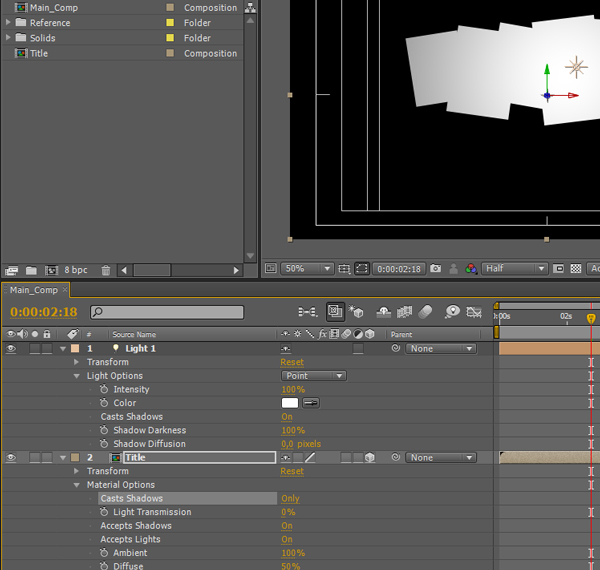 Open Title's Transform properties and change Z Position to -50. You'll see how the Light projects a shadow from our Title.
Now you can start to arrange those solids in 3d space to make them look better. See the screenshot on how i did it.
Save.

It's time to make a camera animation but won't be doing it inside After Effects because I want to show you an easy technique that can turn out to be very handy in future. We'll use Cinema 4d and object library called CStools for this matter.
If you haven't downloaded CStools yet, do it now.
Inside Cinema 4d, go to File > Open, find CStools directory and open CS_DocuCam.c4d.
(If you want to integrate those tools in C4D, watch this excellent tutorial by Grayscalegorilla's Nick Campbell.) 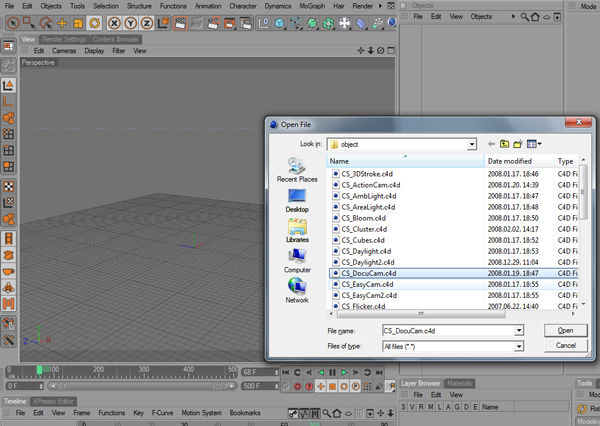 Then, create any primitive object to help you see how camera acctualy moves.
Select DocuCam in Objects panel and see its settings under User Data.
First change Base Zoom to 20%, then, under Snap Zooms, set Probability to 25% and Complexity under Organic Motion - to 20%. 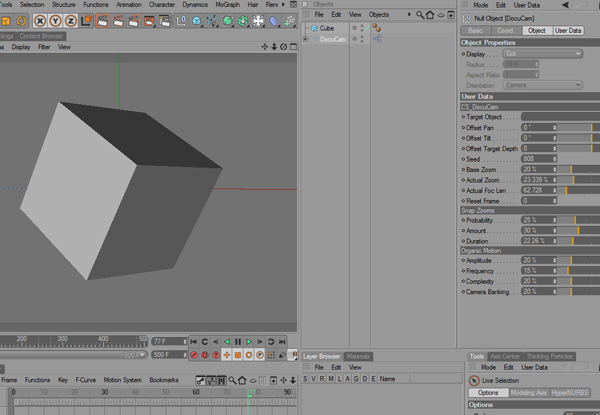 Then, select Save and set Path for output.
Open Compositing Project File pulldown. Set Target Application to After Effects, tick Include 3D Data checkbox and press Save Project File...
Save it wherever you like.

Important: For this to work you have to have a Cinema 4D to After Effects plugin (If you don't have it, open this tutorial and follow through Step 10) 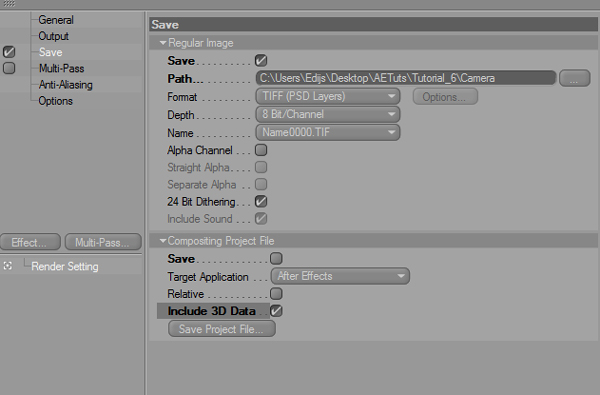 Switch to After Effects.

Now import the file you just saved to After Effects.
New folder called CINEMA 4D Composition should be created. Open the composition in it and see that there's a camera called DocuCam.
Copy and paste it inside Main_Comp. Because of the offset, you'll have to move every layer manualy back to necessary position.

To make everything look a bit better, i moved the objects closer to camera.
Next, we'll make a floor layer. Create a new, white solid wtih size of your composition. Call it Floor.
Turn it into 3d layer. Using position controls, move it back to its original position.
Then, open Rotation properties and rotate X Rotation to around -70 degrees. After that, grab Z axis on pivot and lower the layer so it would be located under our titles. Lastsly, scale Floor's width in the lentgh of your composition. See the screenshot.

Select Floor and make a mask around it by double-clicking Rectangle Tool. Change Mask Feather to 420 and Mask Expansion to -55.
Create a new solid with comp size, call it Background. Put it in bottom of your layer structure. Apply Ramp effect on the layer.
Leave its Start Color black but change End Color to dark grey (#575757). 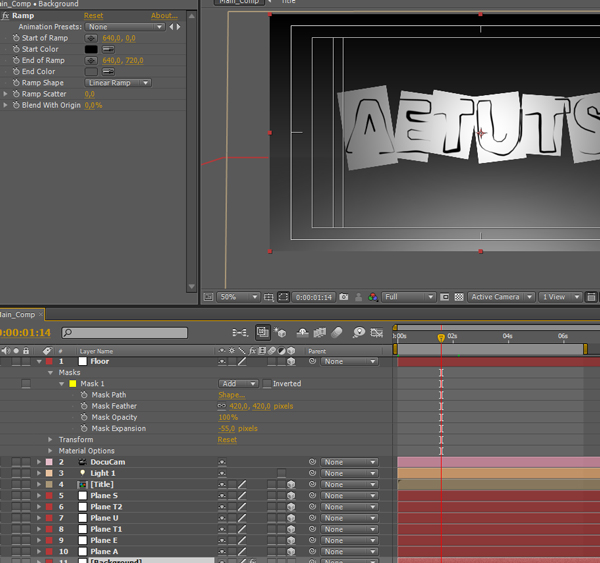 To make the scene more dynamic, let's add some expressions. Create a new Null object and call it Control. Add a slider to it by Effect > Expression Controls> Slider Control. Open Position properties for one of Plane layers and alt+click on the stopwatch to add expression.
Type in wiggle(Pick whip Slider here,5) It should looke like this - wiggle(thisComp.layer("Control").effect("Slider Control")("Slider"),5)
Copy&paste this to
rest of Plane layers.
Save. 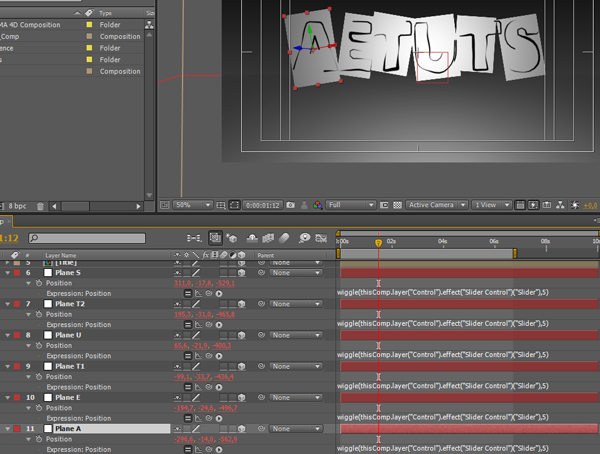 Go to Control layer and animate its slider by placing keyframe with value 25 on 01:10 and keyframe with value 0 on 02:00. Easy ease keyframes by pressing F9 on them.
Now, open Light layer's Position properties. Set keyframes on 00:00 and 02:00. Select first keyframe and highligh Position's X value. Add 300 pixels to it so the light would move 300 pixels to the left over those 2 seconds. Easy ease those keyframes too. 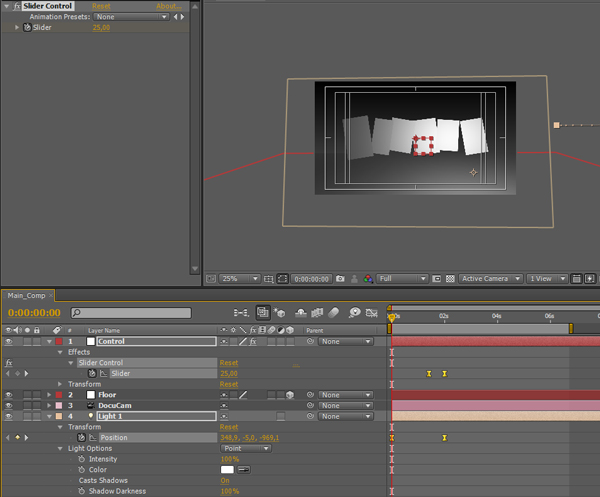 Turn on the motion blur for all the layers. Create an Adjustment Layer and add Curve effect to it. Draw a contrast curve.
Next, add Noise effect. Set Amount of Noise to 5% and untick Use Color Noise.

Open Floor's Material Options and bring down Specular to
20% so the floor wouldn't reflect as much light. Also open Light's Light Options and change Color to light grey (#B5B5B5).
Change project's Color Depth to 16 bits per channel by Shift+clicking on bpc button in Project panel to stop color banding from happening.
Save. You're done. 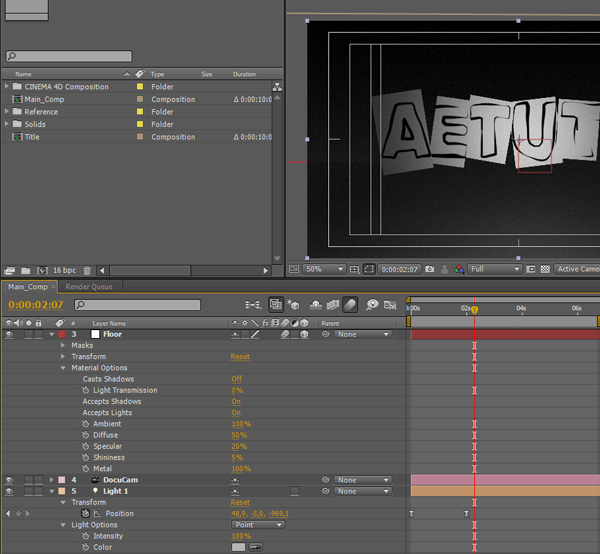 You can also project pictures this way. All you have to do, is import the image, turn it into a 3D layer and position it correctly. Then, under its Material Options, change Casts Shadows to Only and Light Transmission to 100%. 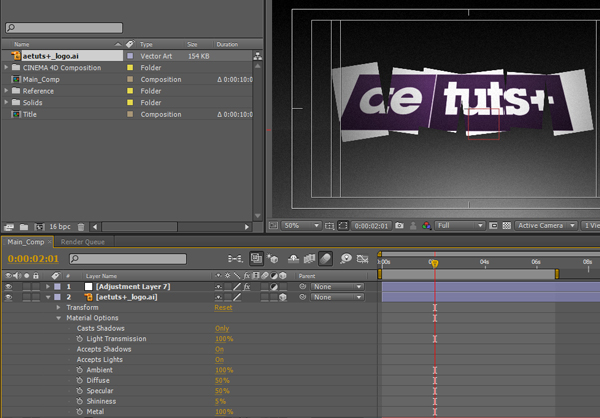 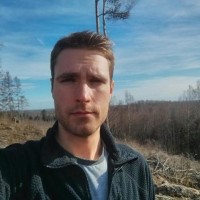