One of the keys to mastering After Effects transcends the addictive process of adding your spark, the glamour, and making everything sexy. As fun as that is, the reality is that we often have the clock ticking against us, whether it’s our client nervously watching the hours rack up, or that family time we’re neglecting yet again. Everyone seems to agree there aren’t enough hours in the day, so why not earn a few easy ones back?

I’d like to think that most of these tips are obvious and that much of the professional world already applies them. However, I never found these in any of my instruction, so I’d like to share this workflow of mine that consistently helps me make better videos and cut my hours in half—by eliminating my most major mistakes.

Simple. For some reason it took me forever to “get” this, and why the seemingly boring process is so vital.

Unless you’re in a market like digital signage, your video needs a soundtrack. And there are plenty of important reasons to start here before anything else.

The bottom line is that video effects are very easy to move around. Audio is far more difficult to ‘nudge’.

Here is an energetic music track where the main instruments suddenly stop and a guitar slides down.
I felt like I was being dropped from mid-air here, so in my video I use a falling transition to
emphasize it. It‘s my favorite part of the video.

2) Storyboard: use a pad of paper!

Even if you’re a terrible drawer like me, you’ll still benefit a lot by doing your test run on paper first. Your brain has better things to do than remember every little detail you’ve conjured up, and the process just takes me three or four minutes (and often saves me hours).

I once spent 4 or 5 hours finishing the details on a great 30-second ad. But I didn’t storyboard, and when I hit the 24 second mark, I had only shown half the client’s talking points and hadn’t even gotten to their logo yet. Oops! Most of it had to be thrown out.

Again in the spirit of ensuring that your timing will work, now create the entire video as basic as you can. Get any important elements in place but avoid adding anything that will tax your CPU or clutter your timeline for now.

Here are two mock-ups I made for my videos. They are really dull, yes, and that’s good, for reasons I’ll explain in a minute.

A more complex example: showing a mockup with 3D movement

For now you’re trying to avoid any details that aren’t critical to the storytelling. If you work on little details like glows and pretty effects early in, several bad things happen:

You make it very difficult to edit major things later

And the most dreadful: you could spend time working on scenes you might decide to cut completely. It’s happened to me a lot.

Watch your “mock” video again and again. Be sure you love it. Because this is the time when you can most easily play with and perfect it.

Your hard work pays off and the fun begins. Go through your video and add smoke effects, gradients, blending modes, textures, and everything else you’ve been eager to add. You’ll find yourself zooming through this faster than usual too, since you can fully focus on aesthetics and not question your storytelling again and again. Good luck! 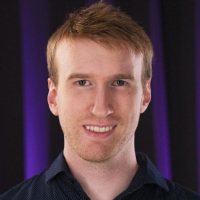 Allen Ellis
I'm a freelance multimedia specialist based in Orlando, FL. I've been using (and loving!) After Effects since version 5.5 in 2003. Find more about me at my site.
Weekly email summary