'Quick Tip'- How to Make a Shaky Camera Effect in Blender

Camera handling is one of the most important parts of animation. Using an arsenal of little camera effects and tricks, we can achieve very dramatic results.

In this tutorial we will learn a few camera handling techniques to make our animations more believable and have a greater impact on the viewer. We will also learn a bit about Blender's particle systems too.

Erase everything. Press "spacebar" in the 3D view and add a Cube. Add a plane and scale it up a bit. 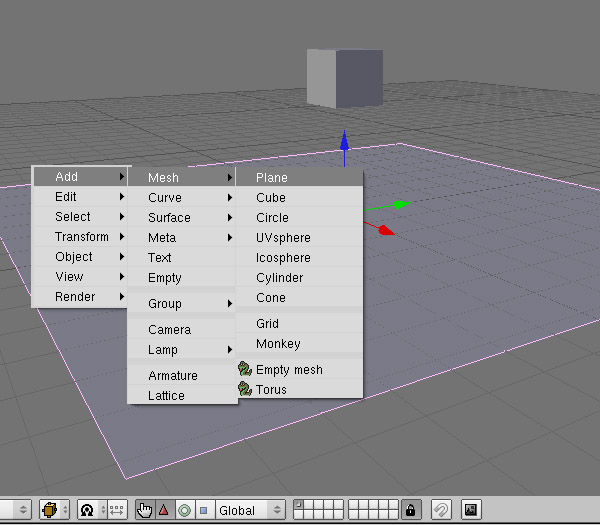 Add a camera and place it close to plane to make the view more dramatic. Press "0" on the numpad to check the camera view. The cube should not enter into the camera view. 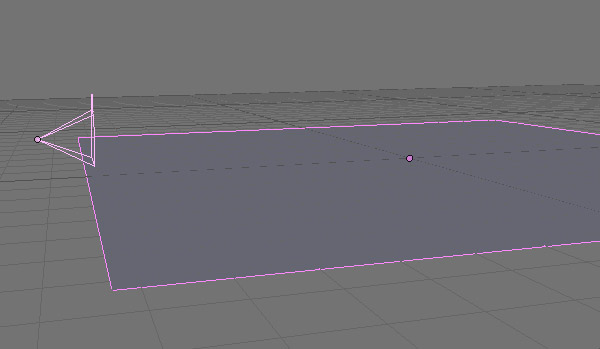 Go to the side view by pressing "3" on the numpad. Press "shift" + the right arrow to go to frame 1. Select the cube and press "I" and click on "LocRot" to insert a keyframe. 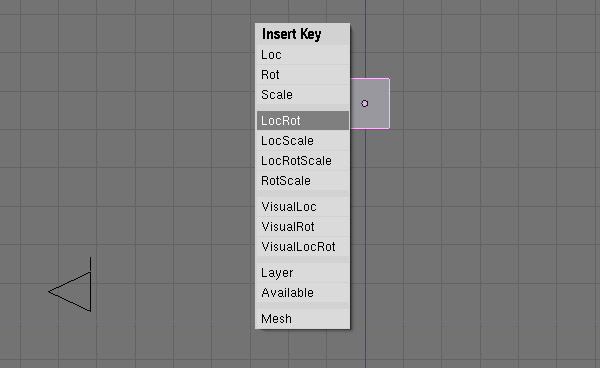 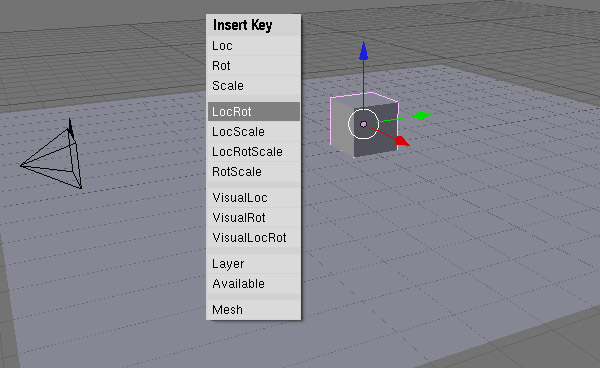 Download the script from: http://mke3.net/projects/bpython/Constraint_Noise-1.0.py. This script gives random movement to any object's location, rotation, and
scale. Split the 3d view. Change one view to the "Text Editor". Open and load the script. 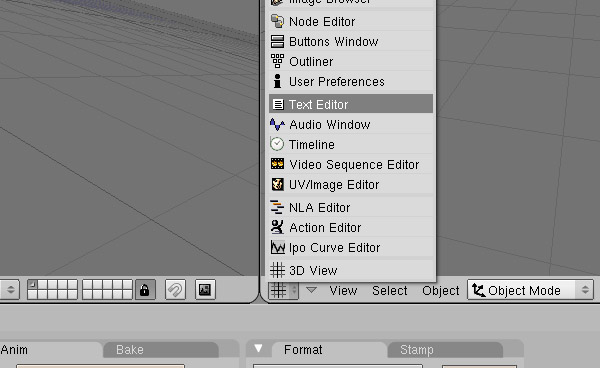 Select the camera. Press "F7" to go to the "Constraints" panel. Add a
"Constraint" > "Script". In the "Script" menu, choose our script and type the object name "Camera". Go to frame 1 and press "alt" + "a" to see the script in action. 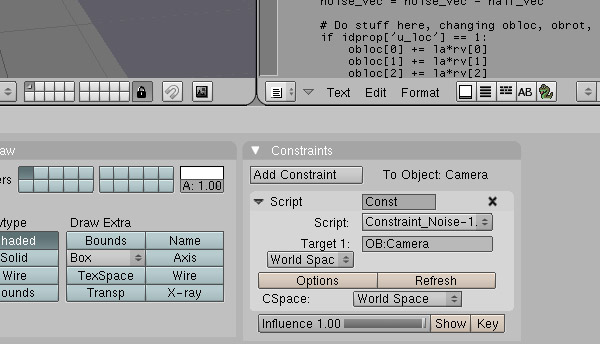 Now we will customize our script according to our animation. Press the "Option" button. Use the settings in the image below. Play the animation, and you will see much less noise in the movement and rotation, but we still need the camera to only shake when the cube hits the plane. In the next few steps we will take care of this.

On frame 25, when the cube touches the plane, move the "Influence" slider up
to full and press the "Key" button.

Go to frame 28 and press the "Key" button once again. 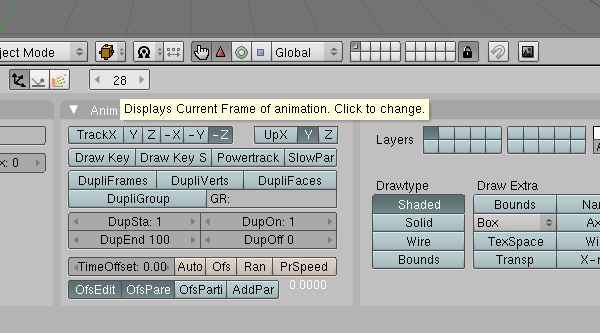 Now we will stop the camera shake. Go to frame 35 and set the "Influence" slider
back to 0.00 and press the "Key" button. Go to frame 1, play the animation, and enjoy the effect!

You can also move and adjust the keyframes in the "NLA" editor. 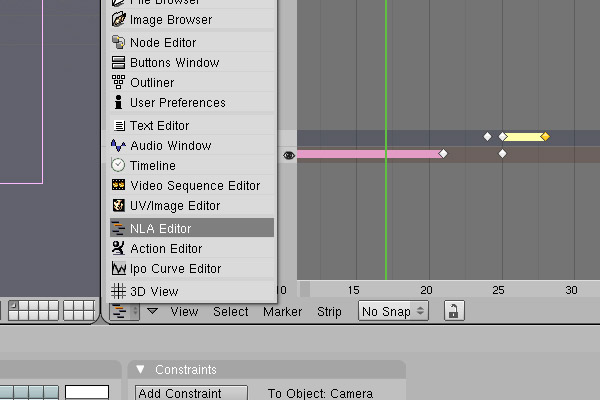 This is not a continuation of the above steps. We will look at a completely new scene here. Create a new scene. Press "spacebar" in the 3D view and add a camera. Add a plane too. 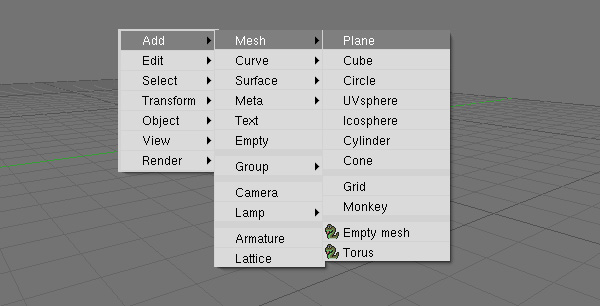 Scale the plane into a rectangle and place it facing the camera.

Select the plane by right clicking, and press the "Object" context button in the "Buttons" window, or press "F7".

Press "Particle buttons" to bring out the "Particle System" panel, and press the "Add New" button. 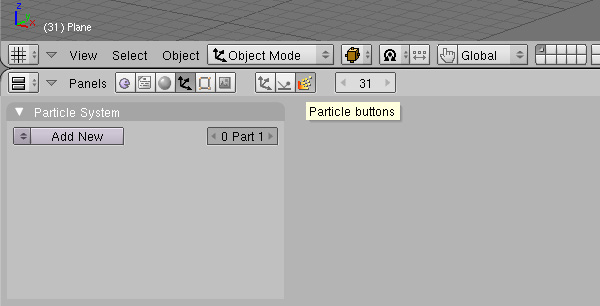 Go to frame 1, by pressing "shift" + the right arrow, and press "alt" + "a" to play the animation. You will see that nothing happens, so increase the "Normal" value to 25 in the "Physics" panel. 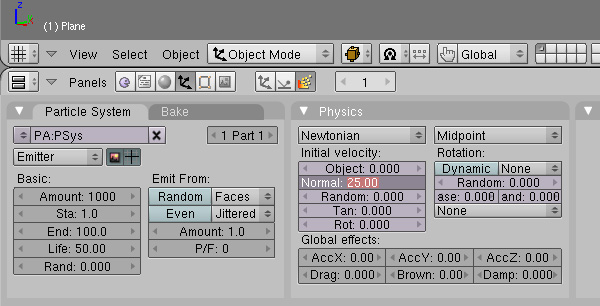 Go to frame 1 and press "alt" + "a". You will now see particles emitting towards the camera from the plane . If the particles are flowing in the opposite direction, just rotate the plane 180 degrees. 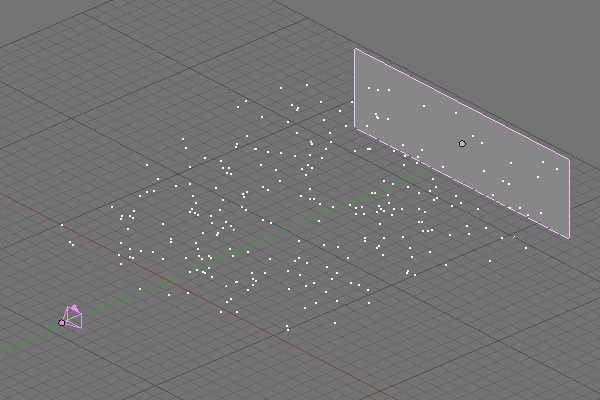 Now make the particles into a solid mesh. You can make them look like any mesh, but here we will make them into cubes. Add a cube.

Select the plane and, under "Particle System" in the "Visualization" panel, select "Object". Type in the name of the mesh object. In this case it's "Cube". 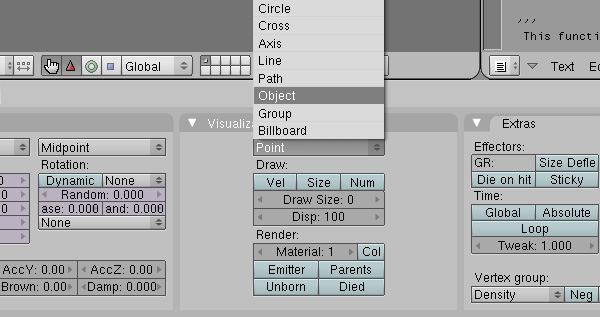 Now what we have is another cube. Press "alt" + "a" to preview the animation. The particles are now in the shape of cubes, and are coming out of the second cube. 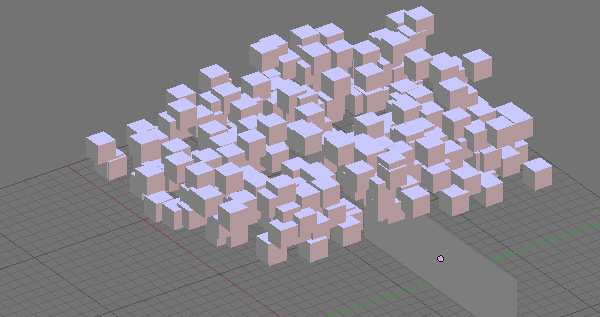 Press "esc" any time to stop playing the animation. Select the cube and position it so that the particles fly towards the camera. Check the camera view, and scale them down or up accordingly. 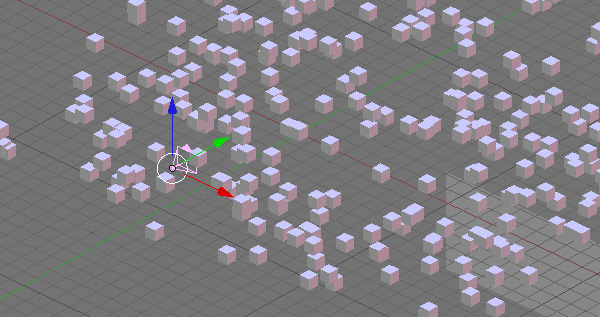 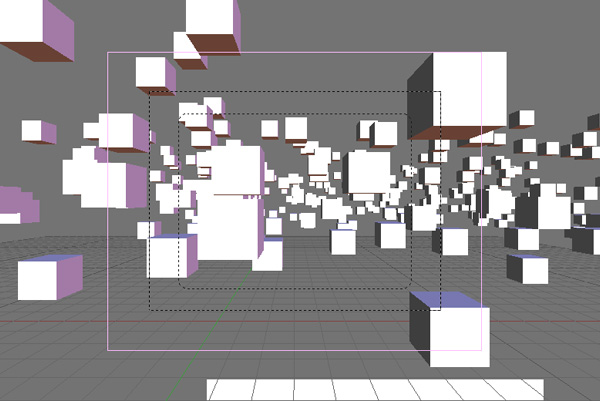 Select the camera. Repeat steps 5,6,7, and 8 from the first segment of this tutorial. In other words, assign the script to the camera, set the values, and keyframe the "Influence" value to 0.00 at frame 1.

Go to the frame where the particles come just before the camera. 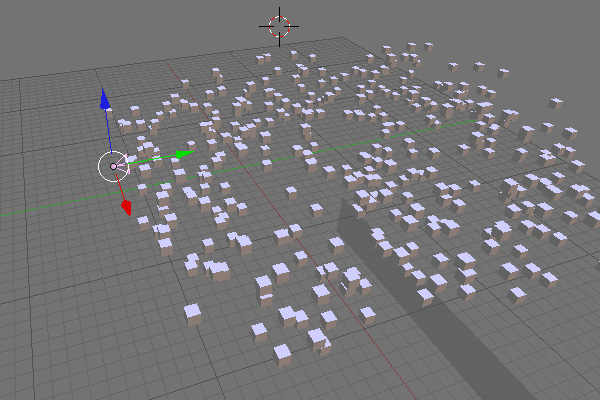 This is not a continuation of the above steps. We are making a
completely new scene here. Once again, use the same script as before, and assign it to the camera with the settings below. Press "0" on the numpad for the camera view, and "alt" + "a" to play the animation. Enjoy! Please note that all constraint settings may differ according to the size of the scene and objects. Feel free to play with the settings as you see fit.

Karan Shah
Karan Shah is a 3D Artist and Animator from India. He is a BFA Graduate with specialization in sculpture. An inclination towards the digital medium made him a self taught computer artist. He is a currently freelancing..
Weekly email summary