Quick Tip - Getting The Best Out of Twixtor

In this tutorial I'll explain how to get the best out of Revision FX: Twixtor, and what you should consider before shooting a footage that you plan to slow down. I'll talk about whats best to do, when using a cheap camera and what problems might occur and how to fix them.

The first thing you'll have to have in mind is that motion blur is Twixtor's worst enemy, and if your footage has a lot of it, don't expect to have good results. If you have a good camera you can skip this step. Motion blur occurs due to the fast motion of the objects in the video and if you have a crappy camera you'll have a lot of it. So the best way to get rid of the motion blur is just to lower the speed of the movement as much possible. For example, if you are doing a punch shot where one actor is punching another, just don't shoot a super fast punch going in front of the "victims" face because:

So the best way to shoot your footage for twixtor will be to slow down your motion on the scene. Just tell the actors to do the scene slowly (Not as if they have mental problems), just a slower than a real punch.That way you wont have any motion blur in the footage, the punch will be exactly in place and twixtor won't get confused and you'll get a good effect

If you are going to do this step when shooting your footage, make sure that there is no background moving objects, like a person walking, because it will look horrible. Just imagine a guy punching another guy at super slow motion and a woman with her child walks behind them twice as fast.

Try and reduce the camera movement, by putting it on something or a tripod, this will enhance your result a lot, because you'll have less motion to process, and you won't get weird results as a natural camera movement, but with a slow motion footage or so (Bearing in mind that you did the "Step 1" of this tutorial). With no camera movement Twixtor will be able to solve the pixel motion easier and you reduce the chance of a crappy result.

Try and reduce the overlapping movements as much as possible, because Twixtor will get confused with the movement and you'll get a really bad glitch in your effect. You can see this problem occurring in my final preview at 0:17, look at the water splash behind her feet. That problem occurs because the water and the feet are going in opposite directions, so keep that in mind.

Step 4: Shoot as much detailed footage as possible

Twixtor blends frames and uses vectors for the movement, so don't expect to get a super slow motion like in the show "Time Warp" for example. If your footage is not detailed, it will stay this way after applying Twixtor, so try to film as detailed as possible.

If you are doing a low detail night shot, don't expect much even if you don't have digital noise. Shoot only when everything is well lit up.

You can see that my original footage is already slow motioned but I didn't feel it slow enough so reduced the speed by 75% using Twixtor. I shot it with a Sony HDR-SR11E, for those who are interested. I did not follow some of the 5 steps above, so I got some problems as you can see, like the splash motion at 0:17. The original length of the shot was 0:03 but after shooting it at slow motion mode i got 0:12, after Twixtor a got 0:40 which is absolutely stunning.

Open a new composition with your footage (My footage is 0:12 seconds long and I'm going to slow it down with 75 percent so I should make my comp length about 40 sec long), and add a solid layer and apply Twixtor to the solid layer. (The color doesn't matter, just make sure its the same size as the comp.)

These are the settings we are going to use: 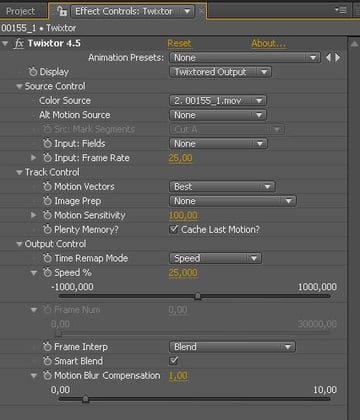 Display: Since we applied Twixtor on a solid, we are seeing our footage on the solid layer. This function allows us to switch between the original footage and the Twixtored footage.

Colour Source: This is the footage that we are going to slow down.

Input Fields: If you are having problem with the fields although AE does a great job with solving them, just use this function

Input Frame Rate: Set it up to match the FPS of your original footage

Motion Vectors: This is how accurate Twixtor will trace the motion of the footage. Best-Bigger render time-Best results , No motion vectors - Faster render time- Bad results

Motion Sensitivity: The more, the best. The name speaks for it self so there is no explanation needed. Play with it and you'll see what it does.

Plenty Memory?: If you tick this, the last motion will be cached so a second RAM preview will be faster

Time Remap Mode: I personally like to use the "Speed", its for setting up how much you would like to slow down the footage (100% means the footage stays the same)

Smart Blend: This will enhance the blending of the frames and you'll get better results.

Motion blur compensation: This will fix the motion blur of your footage, but actually don't relly on it, because it wont work as you might expect.

Hit the RAM preview button and enjoy this amazing plug-in doing its magic :)

Twixtor isn't the only way you can do a slow motion effect. Go to the effects panel and type "Timewarp" and check this plug-in that comes with After Effects. It actually pretty good but the render time can kill you.

Now go to Layer - Time - Time stretch - 125% and hit OK. This will render fast but the results are really crappy and you can NOT get a super slow motion effect like with "Timewarp" or "Twixtor"

There is a technique for slow motioning interlaced footage, but I'll leave this one to Maltaannon.