This is the first of a two part tutorial on how to create a sonic scream similar to Banshee's scream in 'X-Men: First Class' or the sonic cannons in 'The Incredible Hulk.'

In this tutorial I'll be going through the process of creating the displacement map for the warping (using the CC Glass effect), making the displacement look like it has some volume, and adding camera shake. In the final comp I do some camera projection.

In the effect I use the Smoke Wisp 8 from the smoke stock footage pack from Aetuts+ (which you can download here if you like their Facebook page). I also use the Knoll Unmult plug-in that you can download for free from Red Giant Software. 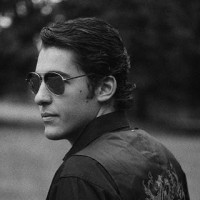 Maxwell Swet
Hi, my name is Maxwell Swet. I have been interested in special effects for a long time, but what really got me started was watching Star Wars for the first time about 3 years ago. I started out doing lightsaber effects in LSmaker, moved up to FxHome EffectsLab, and then to After Effects in 2010. Since then I have been learning a lot about visual effects and filmmaking. I love my Savior Jesus Christ, without him life would be meaningless.
Weekly email summary