In this tutorial we'll be going through the steps used to create a stop-frame animated paper cut-out effect that appeared in the Mystery Jets music video that I directed a few years back. We'll cover techniques for optimizing resolution when shooting against green screen and using after effects to create a quirky low-fi animation look.

To begin with, you will need to film your action against a green screen. For the original video, we used a large green screen studio with a treadmill for the actor to run on at a constant speed. For the purposes of this tutorial we will create a low budget version of this (running_loop.mov supplied), which I think is equally as effective.

Securely pin up a large sheet of bright green paper or fabric and allow it to curve onto the floor so that the actor can stand on it. Tape it down so it can't move about.

Don't worry too much about lighting the actor as the effect is essentially a silhouette anyway. 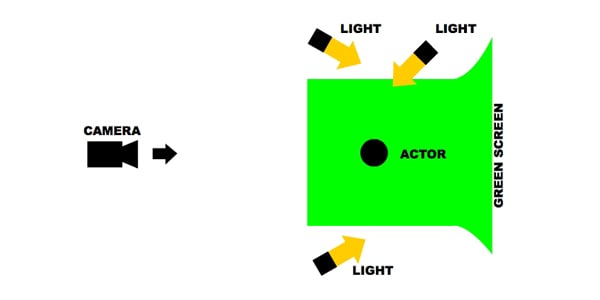 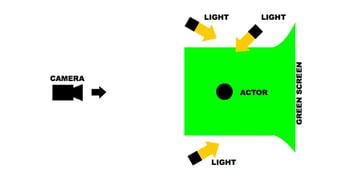 Tilt the camera at a right anlge to a portrait orientation (“Dutch tilt”) so that the actor fills as much of the screen as possible. As he will be keyed out, this gives us a larger resolution to work with in post; a useful practice for a lot of special effects filming.

Instead of using a treadmill, the actor can just run on the spot. After a few practice runs, start filming. It is important to make sure that the actor’s action is exaggerated so that it can be clearly seen in the final effect. What we are trying to achieve is a running action that we can loop after about a second.

Capture your footage and name your file appropriatley (I've called mine running_loop.mov) 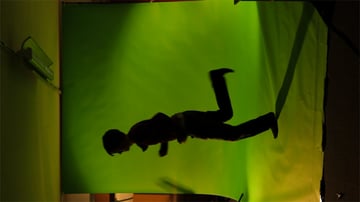 Next, we need to screw up some paper and scan it in.

We want a nice paper texture for our animated running man. Screw up 13 different pieces of paper and then flatten them back out. They should now have a nice wrinkled texture.

Use a scanner to scan them individually into your computer at a high resolution (1920 x 1080px, 72 dpi will do it).  It is good to use a different sheet for each scan in order to get a different texture each time (I’ve used some old envelopes). 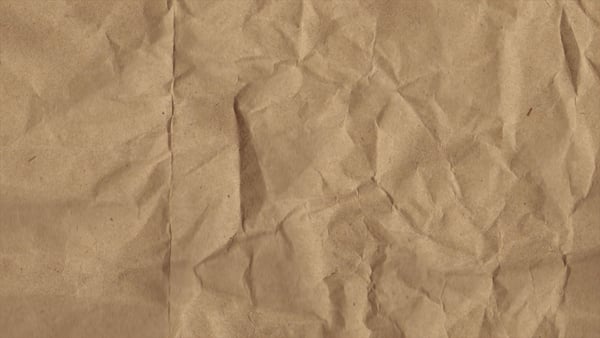 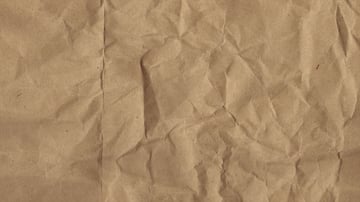 In order to be able to import them as an image sequence later on, it is important that these image files are all stored together in the same folder and numbered as a sequence (01-13).

We also want to create the background. Scan in another piece of paper at the same resolution. To provide a nice contrast make sure it is a bit of a different texture from the previous ones.

The backdrop of a real stop-frame animation would rarely be tampered with, therefore the effect will be more convincing if our backdrop paper texture is quite flat rather than wrinkled.

Save the image file as background.jpg. 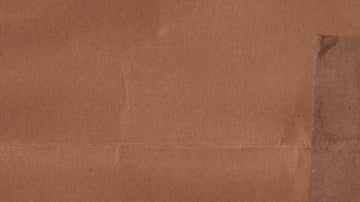 Set up your After Effects project.

Open After Effects and import your green screen footage and background image (select File > import > File and select the files from their folder). Make sure the Import As is set to Footage. 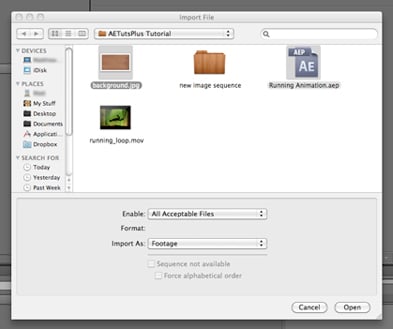 Import the screwed up paper as an image sequence (select File > Import > File and select paper_01.jpg and make sure you check the JPEG Sequence checkbox at the bottom of the import window). 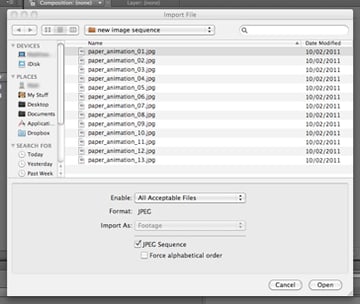 Create a new composition (select Composition > New Composition), rename it Main and select the appropriate Preset from the drop down menu (in this case HDTV 1080 25). Change the Background Color to white. Press OK. 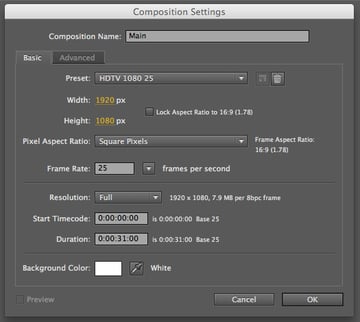 Drag your footage from the Project panel into the Main composition.
As we filmed the footage with a tilted orientation, we need to correct this. Select the footage layer and press R. The Rotation properties will drop down. Adjust the Rotation setting to 90.0˚ and the actor should now be standing upright. You may also need to adjust the Scale (press S) and/or Position (press P). 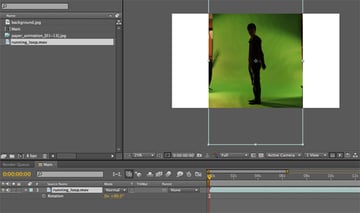 We need to find loop points of the actor from the green screen footage.

Select the running_loop.mov layer and key out the green screen using Keylight (select Effect > Keying > Keylight). In the Effect Control panel, using the pipette (from the Screen Color option), select the color of the green screen in the Composition Preview panel. Back in the Effect panel's Keylight Controls, drop down the Screen Matte option and adjust the Clip Black and Clip White settings to fine tune your key around the actor. 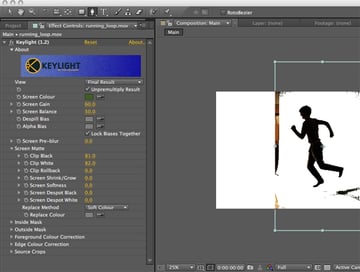 Select the Pen Tool from the tool bar at the top to mask out any green that still remains on the edges of frame. With the Pen Tool selected, draw a simple, closed shape around the actor.
You should now have isolated your actor. 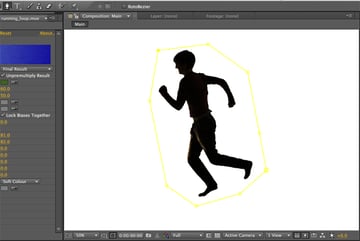 Stop-frame animators can often use “twos” (doubling up on frames to save time) and the position of animated objects can often move with charming imperfections. We want to recreate these qualities to sell in the stop-frame look.

In order to achieve the ‘wiggly’ stop-frame movement we will turn to the Wiggler (select Window > Wiggler).
We want to adjust both Position and Rotation.
We'll begin with Position.

In your timeline, select the Running_loop.mov layer and press I to move to the first frame. 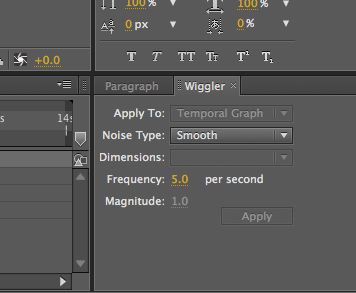 Press P to reveal the Position properties and click on the Stop Watch icon to insert your first keyframe.
Press O to move to the Out Point and insert another keyframe, by pressing Alt + Shift + P. Click on the property name (Position) to select both keyframes.

In the Wiggler panel adjust the Frequency to 12.5 and change the Magnitude to somewhere around 30 ( the larger this number obviously the more our actor will jump around the screen).  This will synchronise the Position movement with the new frame rate.

Next, select All Independently from the Dimensions drop down options and click the Apply button.
New keyframes will automatically be created. As default, the Position will animate between these keyframes.

In order to get that ‘stop-frame’ look, we need to make sure it appears as if each frame has been individually photographed. Make sure that all the Position keyframes are selected (so click on the property name to do this), right-click on any Position keyframe and select Toggle Hold Keyframe.
We have now stop-frame effected the position. 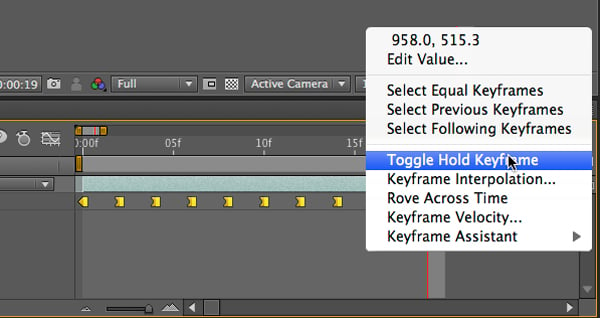 Repeat this same process (Steps 15-17) for the Rotation properties, but just use the shortcut R in  place of P (for example press Alt + Shift + R to insert a keyframe) and adjust the Wiggler Magnitude to somewhere around 5 (as now we are working in degrees not position). Also, you don’t have to worry about the Dimensions drop down menu as this is irrelevant for Rotation.

We need to change the image sequence frame rate to be the same as the rest of the project. In the Project panel, right-click on the image sequence and select Interpret footage > Main. The Interpret Footage window will open and under the Frame Rate section, adjust the Assume this frame property to 12.5 frames per second. And click Ok.

Drag your paper_animation image sequence from the Project panel onto your Main composition timeline and place it below the running_loop.mov layer. Click on the Toggle Switches / Modes button at the bottom of the screen to reveal the Track Matte (TrkMat) option. Click on the TrkMat drop down menu on the paper_animation layer and select the Alpha Matte option.
Your paper texture should now be cut out in the shape of the actor.

To accentuate the look of the paper cut out, select the running_loop.mov layer and in the Keylight controls in the Effects panel, increase the Screen Shrink / Grow option to make the matte a little bit ‘fatter’. This will make it look like it has been cut out a little less precisely and enhance the effect. 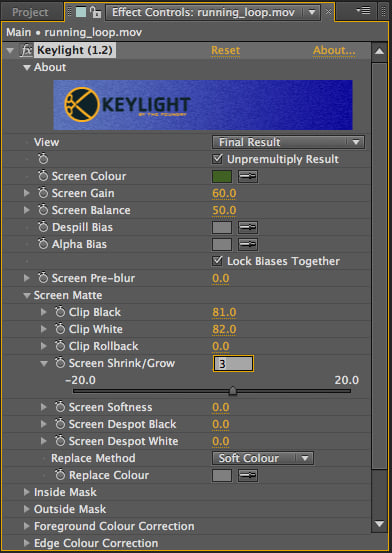 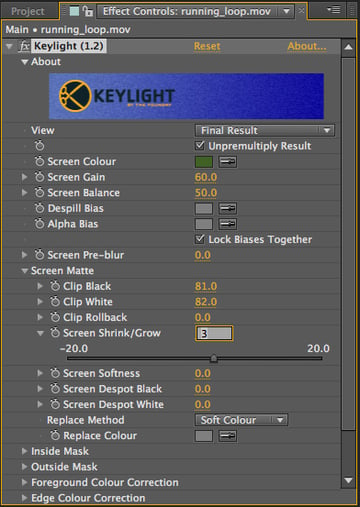 In the timeline, right-click on the paper_animation image sequence layer and select Layer Styles > Drop Shadow. This will create the effect that the paper animation is slightly lifted from the background. 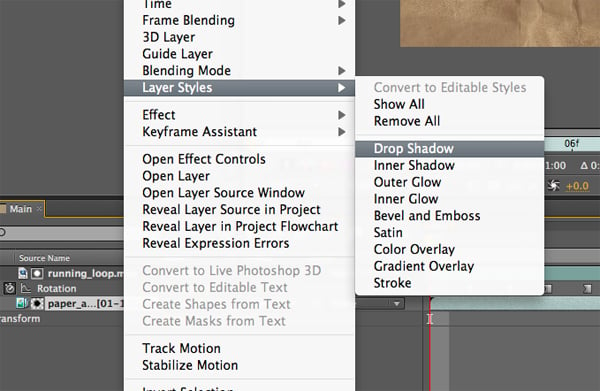 In the Project panel select background.jpg and drag it into the timeline (under the other two layers). Use the Wiggler again to animate the Rotation and Position in the same way you did for the running_loop.mov layer (Steps 15-17), but this time be a lot more subtle with your Magnitude (between 0.2 and 1). You should also increase the Scale of this layer slightly to about 101%.

Use the same process that we used in Steps 15-17 but this time adding keyframes to the Brightness properties of the Adjustment Layer instead of to the Position or Rotation properties. For the Wiggler Magnitude I would suggest something around 5.

Your stop-frame animation effect is now complete. It should look something like the image below. You can loop the footage in an editing package to create a constant stop-frame running effect. 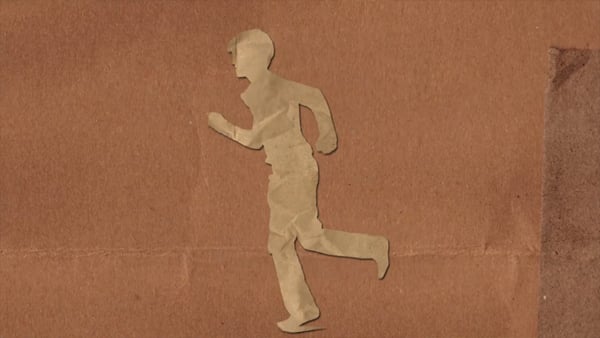 Matt Freeth
Matt is a film and music video director living in the UK. After editing videos for Kula Shaker and The Killers, he went on to direct promos for Editors ‘Blood’ and Mystery Jets ‘Boy Who Ran Away’. His first short, Luke & The Void has screened at festivals around the world. Matt continues to direct live-action and animation projects. He currently works as art director for a video marketing agency in the UK.
Download Attachment
Looking for something to help kick start your next project?
Envato Market has a range of items for sale to help get you started.