How To Recreate The Darkest Hour Titles

Hey everyone, today we take a look at how to create a quick basic title inspired by the upcoming The Darkest Hour movie. Although very simple and rough, it does sell the effect and probably sells it better than the actual trailer itself!

In this tutorial, we're going to be using Trapcode Form 2.0 as the base for our animation. With Form, we're going to create a simple disintegration effect using Form 2.0's new Quick Maps feature. (You can achieve the same effect using Form 1.0 by following this technique. Aside from Form, we're also going to be using Shine (although you could use CC Light Burst) and Optical Flares (although you can learn how to create a pretty decent lens flare using only After Effects' built in tools here.

With some color correction, color grading, and a few keyframes, we can create a pretty decent 'Hollywood' style title. Don't forget to fine tune the animation and add your own spice to it! My apologies for the rapid speed at the beginning of the tutorial, it will slow down once we really dive into the project! Enjoy guys. 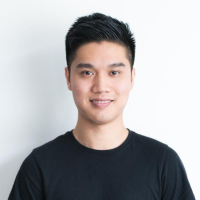 VinhSon Nguyen
Designer and host of CreativeDojo.net, a great source for motion graphics and vfx tutorials, resources, and news. You can follow me on Twitter (@CreativeDojo)
Weekly email summary