How To Keep Your Color Presets

Have you always wanted to create your own color presets? Now you can! Make your own complete library of easily adjustable color effects with this new tutorial. From levels to hue and saturation, you can now have full control over the complete look of your scene. Do you want the scene to be a rainy day or a warm summer? Lets take a look!

First of all, we need some footage to work with. The footage I will be using for this tutorial can be downloaded at here. Just go to the download section and go to tracking plates. Then download the T-Rex chase footage. Of course you can also shoot your own footage. For this example, we’ll be creating a action grade. The scene will be tinted with deep blue colors and will make the scene look cold but intense.

Let’s import the footage as a JPEG-sequence. Then drop the footage into a new composition. Now, to keep things organized create two folders. Name the first one “Comps” and the second one “footage”. Drop the composition in the “Comps” folder and the JPEG-sequence into the “footage” folder. Now we are ready to go. 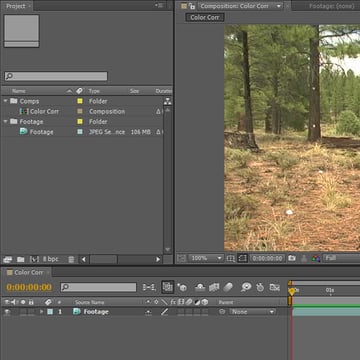 Just as a tip, try this tutorial to understand bit depth so that you have full control over your color management:. The default settings are for this footage just fine though. 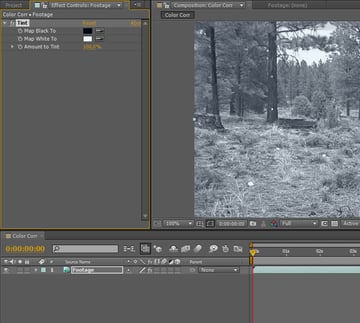 After that, apply a “levels” filter, also found under the color correction tab. Set the “input black” to about 60 to create a nice contrast. Leave the other settings as they are. However, you must be careful when adding contrast. Although it gives more depth and a nicer look to the footage, when applied to much it will destroy the details. Be sure to find a good balance between detail and contrast. 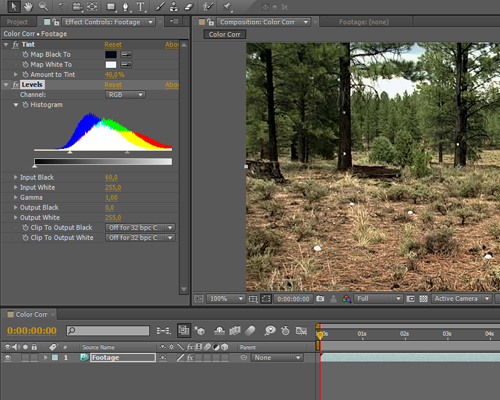 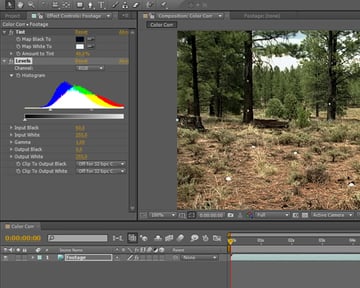 Now, apply a “photo filter”. Just type “photo filter” in the Effects and Presets tab and drop it onto your footage. You can use any preset you want but for this purpose I like the “Cooling filter (82)” preset. Set the Density to about 35%.

Next, apply a “curves” filter to the footage and create a very slight contrast. Then go to the red channel and remove some red from the footage. This will give the scene a nice blue-greenish look.

Finally, apply a “hue/saturation” filter to the footage. Set the Master Hue to about 8 degrees to add a blue look and set the saturation to -5, to desaturate the footage just a little bit.

Now, make a RAM-preview of the footage and make sure the color suites the scene. Depending on the scene, you can even keyframe most of the effects due to the fact that the light in the actual footage is constantly changing.

To save your color correction as a preset, select all the effects (otherwise AE will just save the last one you’ve selected) and go to Animation -> Save Animation Preset in the top menu. Give your preset a name and hit save.

Now After Effects should be reinitializing the effects and presets. This may take a moment. To apply your effect to other footage, just go to the *Animation Presets tab and then to User Presets. There you should find your grade. To test, just import the footage again and apply the effect.

Even though the effects looks good on this scene, as soon as you import other footage the effect may look different. This particular original footage is very saturated and has a yellow tint (see the foreground grass). However, because we’ve created this effect ourselves we can easily adjust it. To match other shots, just play around with the settings. In most cases however, you will find that the effect can be applied to many shots without completely having to readjust all the effects.

Now you've created your own action grade. However, of course you can always create more grades! If for example you want to give your footage a more warm and summer look, you can apply the same effects as for the action grade, but then instead of blue you can take a nice warm yellow color for the tint and the hue for example. The key is to play with the settings until you get the look that matches the feeling of your scene.

That was it then. You can now create and save your own color presets! Premium members can download the scene file and the preset. Don’t forget to stand out, and be creative!

WorkflowAdobe After Effects
Did you find this post useful?
Yes No
Would you like to provide feedback (optional)?
Cancel Submit
Want a weekly email summary?
Subscribe below and we’ll send you a weekly email summary of all new 3D & Motion Graphics tutorials. Never miss out on learning about the next big thing.
Sign up

Hugo Tromp
Hello, my name is Hugo Tromp and I'm a 3d artist. I love working with 3ds Max, but I also work with software like Maya, and Photoshop for postproduction. I've been in the CG world for 3 years or so, but I enjoy every aspect of modeling, animating, and compositing, and always strive to stand out and be creative!
Download Attachment
Looking for something to help kick start your next project?
Envato Market has a range of items for sale to help get you started.