How To Create A Surreal Outer Space Nebula

You don't need to be an astronaut to enjoy a breathtaking celestial scene... you can create one yourself! They say beauty is in the eye of the beholder... Well I don't know who "the beholder" is and why his eyes are so gorgeous, but I think this effect is quite lovely as well. Enjoy!

Before we get started I must say that the final rendered output of this comp will take a huge amount of time, but I hope the final result will be worth it. I will be using After Effect CS4 for this tutorial. Also you will need Trapcode Particular 2.0 version of this plugin, because we need its shadowlet feature. Optional plugins: Trapcode Form and Lux, please download demo versions from Trapcode site. So let's start with After Effects by creating a few folders in the project panel. I created four folders: 'ALL Comps', 'pictures','sound'.

It's easier to build the scene using guide pictures. You can use any picture of space nebulas that you want. As for me, I used beautifull work of Greg Martin (www.artofgregmartin.com) called 'EUPHORIA'. You can download it from his site. We will just use it as guide to understand location of each element in 3D space.

Download and import it into your picture folder in the project panel. Then select folder 'Pictures', and select File->Import->File. Choose your picture and click OK.

Now let's create a new composition. Select Composition->New Composition. Use preferences as it is shown on the screencap below.

Select your guide picture, which we imported in the previous steps and place it to the timeline. Scale it down to 60% in my case and make it 'Guide Layer' with right click on it. In that case After Effects will be ignored in final render output. After all, with this layer selected, hit 'Enter' and rename it as 'guide nebula'.

Next we need to create our light array for future particle system. We need six light layers for it. First of all, create new Point Light layer by clicking Layer->New Layer->Light. Change name to 'Emitter Top L', type - to Point, color as on the screencap below. The reason why we used such dark color, is because Particular would be affected by light intensity, but more information about it is in the following steps. 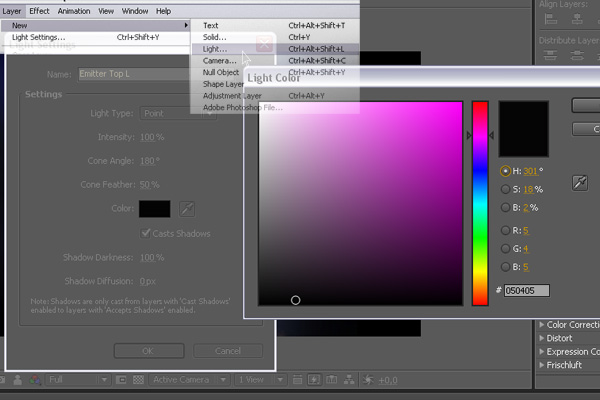 With the Emitter light layer selected, hit 'P' button on the keyboard, change position properties as shown on the screencap below.

Now duplicate this layer 5 times by selecting Edit->Duplicate. Change it x,y positions as shown below. Finally, its renaming depends on position of each layer. I used Emitter Top, Emitter Mid L and R (left and right), Emitter Down L and R. 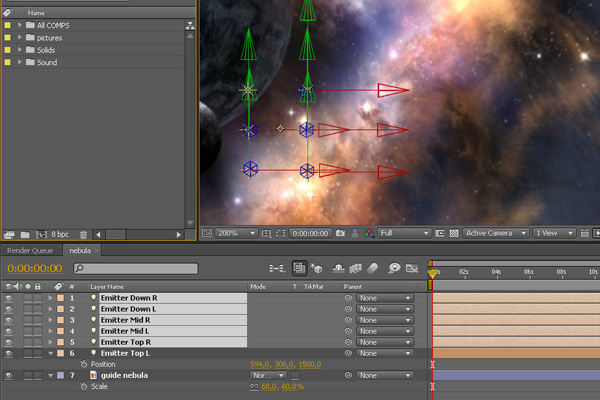 Now let's take a look at our guide picture. As you can see, nebula has some "corns" like things that go radially from the center of it in z-space and x,y space as well. In the next steps we can try to imitate this using particles of the Particular and Lights as emitters of particles. But first let's add some keyframes for position of the lights. And then add Particular to the comp. 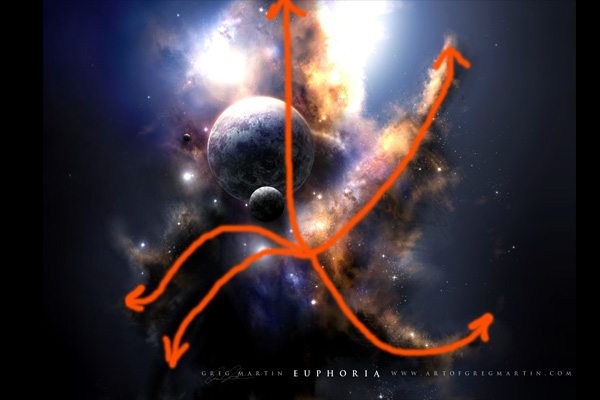 Select all light layers, and hit 'P' on the keyboard. Then click on the stop watch, this action makes first keyframe for us.

Now deselect all by ctrl+click on 'Emitter Top L' layer. Move your Current Time Indicator to 02:00 seconds, change position of the light as shown below. 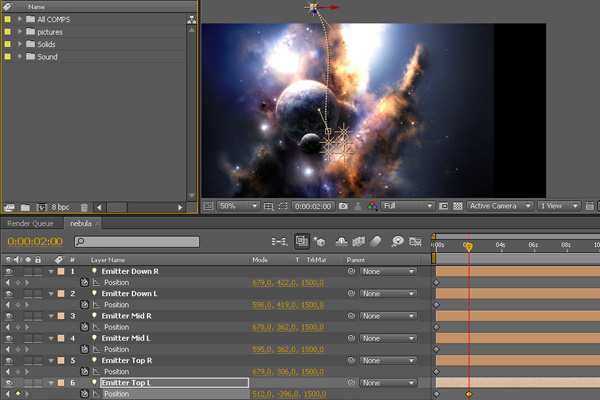 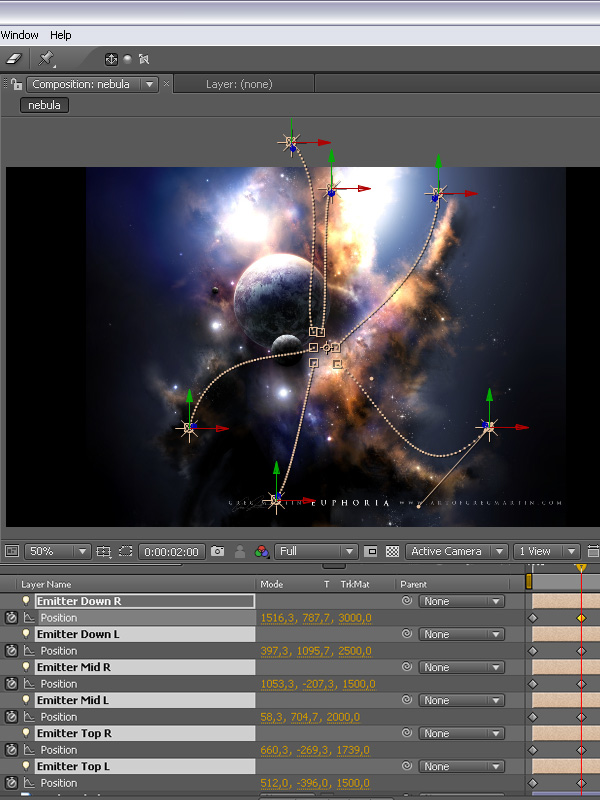 Create new solid layer by choosing Layer->New->Solid. Name it BG, make it comp size. Place it below all layers and turn off eyeball of the guide nebula layer. 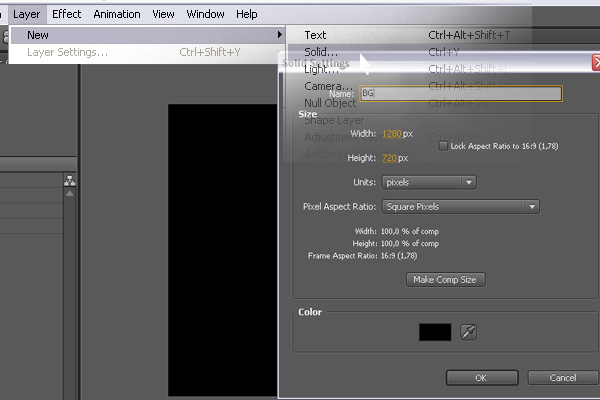 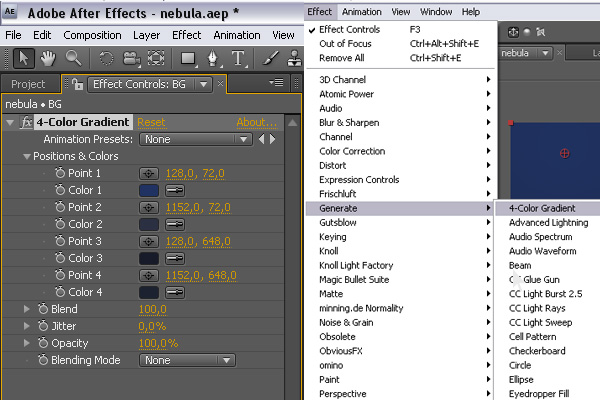 Apply Particular plugin for it. Select Effect->Trapcode->Particular. Don't forget that this must be 2.0 version of this plugin! 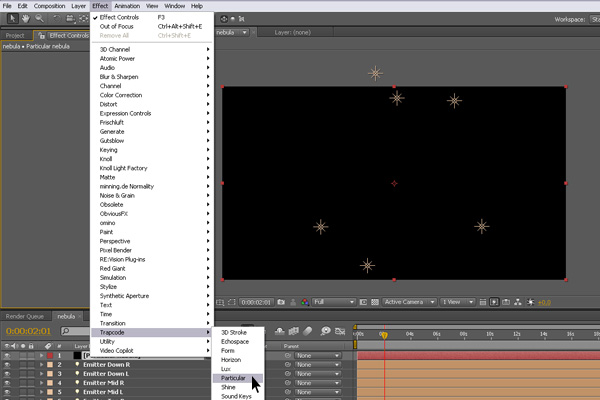 Change settings of the plugin as shown on the screencaps below.

For this moment our nebula is black - it's ok, because we didn't add lights to the composition. But before we do this let's 'freeze' our nebula for some time. Move your current time indicator to the 2:00 seconds. Then go to the particular "Physics" submenu and click on the 'Physics Time Factor'stopwatch . This will create first keyframe, then hit PageDown button on the keyboard and change value from '1' to '0'.

Now move your Curent Time Indicator back to the 2:00 seconds on the timeline. Then hit 'B' on the keyboard - this action sets the beginning of our composition for final render output.

Roll mouse cursor over pick whip, press down and hold left mouse button, release it when you will be over with 'Cam Null' layer. This action will parent our camera to the null object.

Then move your timeline indicator to the 2:00 seconds. Select 'Cam Null' layer and with layer selected, hit 'R' button on the keyboard. This will release Rotation properties of the layer. Then click on the 'Y-rotation' stopwatch. Hit 'End' button and then change y-rotation value from '0x -0,0' to '1x -0,0'. This action makes loop rotation for us.

With 'Violet point' layer selected, hit 'P' button on the keyboard. Change the position values of the light as shown below.

Create new Light layer: Layer->New->Light. Change type to 'Spot' and use position and light settings as shown below. Color I used was #3A7FFD.

Create new Light layer: Layer->New->Light. Change type to 'Spot' and use position and light settings as shown below. Color that I used was #3A7FFD.

Create new Light layer: Layer->New->Light. Name it 'Global brown'. Use 'Spot' type, change intensity to 150% and use position and light settings as shown below. Color that I used was #BC7300. 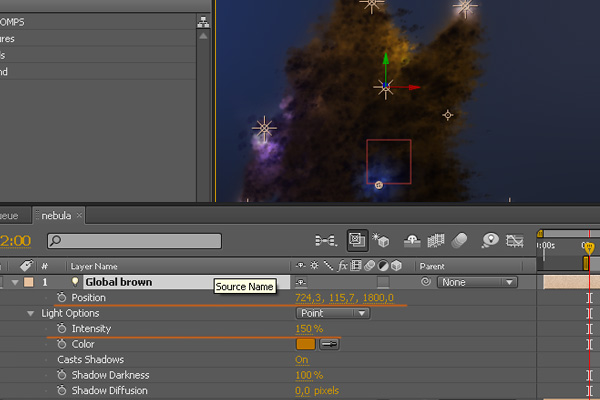 Now adjust position of 'Cam Null' layer and Camera as shown below. After that move your Current Time Indicator to the 16:16.

Move your Current Time Indicator to the beginning of the composition by pressing 'Home' button on the keyboard. After that with 'Particular stars around' layer selected, apply Trapcode particular to it: Effects->Trapcode->Particular.

Select preset 't2_StarfieldStatic1_HD'. After that move your Current Time Indicator to 2:00.

Modify plugin settings as shown below. 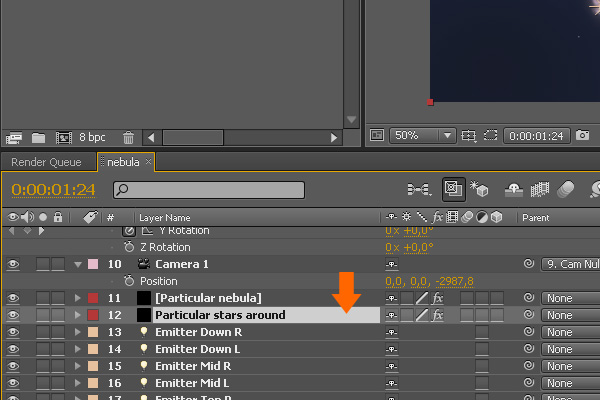 Apply Trapcode Form plugin to it: Effect->Trapcode->Form. Actually, you can use only Particular for this action, but I prefer combination with Form plugin.

Let's add some planets into the scene. First you need to import texture for your planet. Actually, I used three planets, but we can use only one for these three, just will play with shading. I used textures from my collection, you can download some of similar type from here (CGTEXTURES.com). For tutorial I used 'ConcreteBare0035' texture. After that import it into the project by choosing picture folder and select File->Import->File. 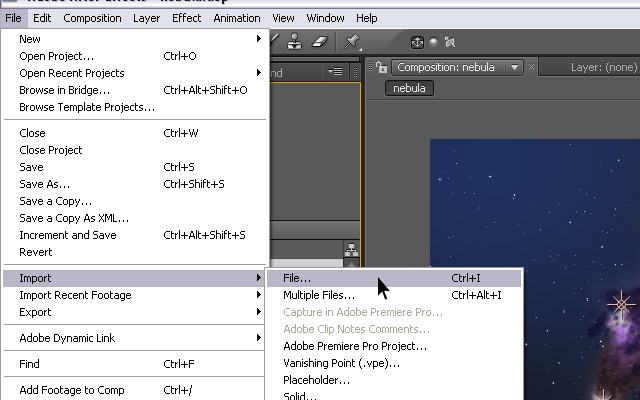 Rename texture by selecting it in the project panel and hitting 'Enter' on the keyboard: 'planet'. Then place it to the timeline. 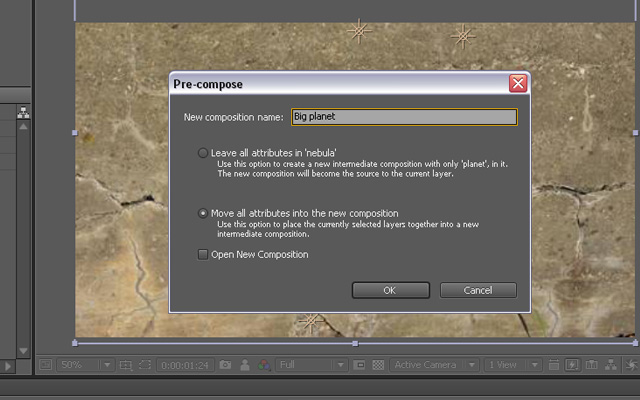 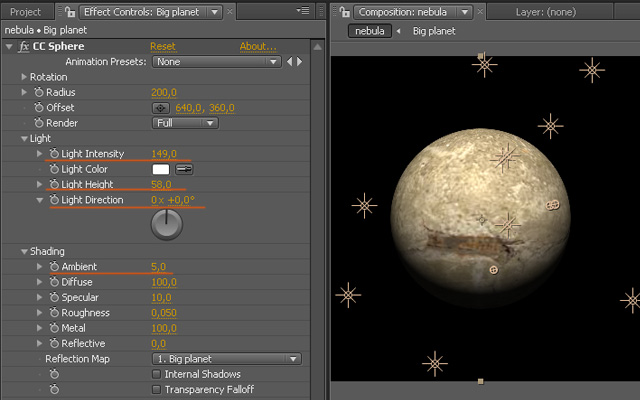 Turn on 3D switch for this layer. After that with layer selected, double press 'A' very fast, this will reveal layer material options. Turn off 'Accepts lights' option. 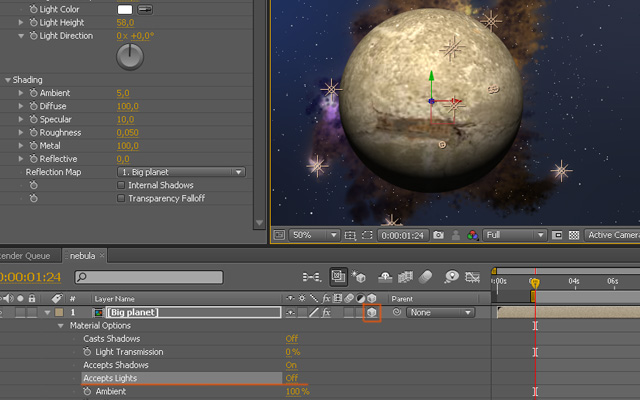 Adjust position and scale of the planet. Also, because our planet is fake 3D (flat actually) we need to apply some tricks to hide this when our camera will be rotating around nebula. With layer selected, go to the Layer->Transform->Auto-Orient->Orient Towards Camera. After that our planet always will be facing to the camera.

Then go to the effect control panel with 'Big planet' layer selected. Reveal 'Rotation' menu of the CC Sphere plugin, then Alt+Click on the 'Rotation-Y' stopwatch and add this expression (case sensitive!): thisComp.layer("Cam Null").transform.yRotation . This will synchronize rotation of our planet with main scene camera rotation.

Now if you make Ram-preview (hit 0 on the Num Pad) you'll notice that our planet isn't obscured properly with nebula. It's because there are some plugin restrictions. But, you can use this cool script. Or do some additional work for it like I do. We need two different layers for our planet. One above Nebula and one below it. First place 'Big planet' layer right below ''Particular nebula' layer. Then duplicate it: Edit->Duplicate, and place copy above it. Name it 'Big planet 2'.

With 'Big planet 2' layer selected, hit 'T' button on the keyboard. Move your current time indicator to 08:24. Click on the 'Opacity' property stopwatch. Then move to the 10:00 - change Opacity=0%; move to the 24:00 - simply click on the stop watch (check value=0%); move to the 25:01 - change Opacity value to the 100%. Check animation with Ram preview (I recommend to set resolution of the ram preview to Quarter and skip 5 frame to get faster, we just need check out how elements interact now). Now, everything must be working properly! 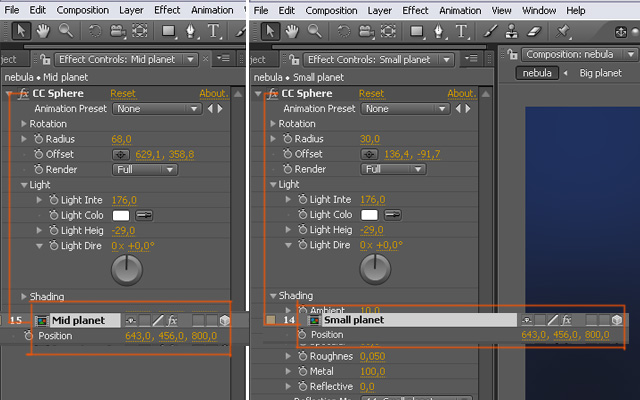 Let's add some more elements, for example, smoke. This will add some depth to our scene. I used Form for it, but you can use also Particular for it. Create new Solid: Layer->New->Solid. Make Comp size, color doesn't matter, name it 'Form Smoke'. After that apply Form plugin: Effects->Trapcode->Form. Change setting as shown below. 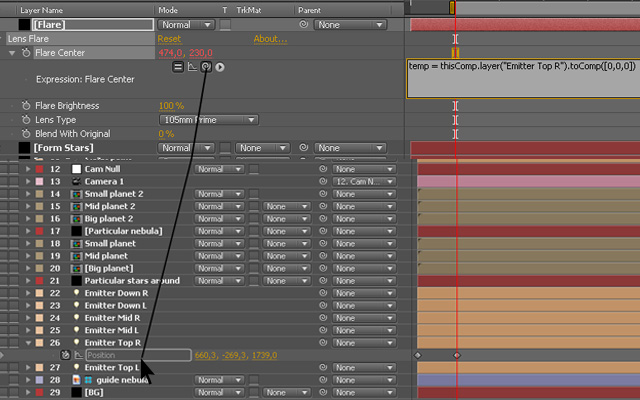 Now we can add some additional group of stars near our emitter lights. For that create new solid: Layer->New->SOlid. Name it 'Form stars down L'. And apply Trapcode Form to it: Effect->Trapcode Form. Place this layer below 'Particular nebula'.

Select 'Emitter Mid L' layer and with the layer selected, hit 'P' on the keyboard. Now when you can see its position, copy it values to the Base Form x,y,z. Adjust another settings as shown below. 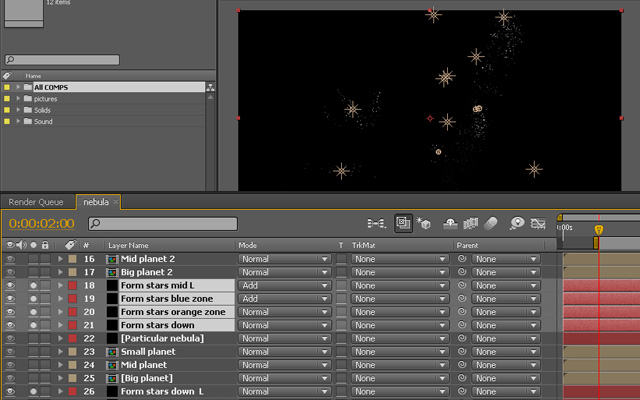 Add some glow effect to the 'Big planet' and 'Big planet 2'layers: Effect->Stylize->Glow. Adjust your settings. Color A #960000; Color B #FFBE61. I also increased contrast inside 'Big planet' composition, set Contrast to 83,0. 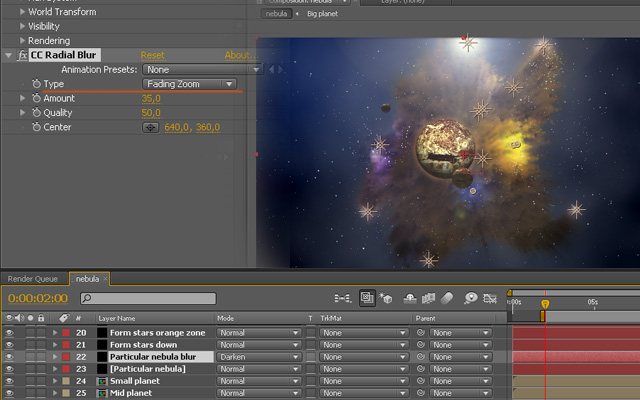 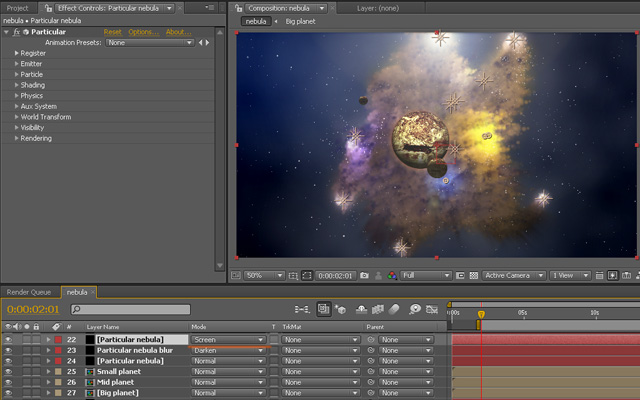 Finally add adjustment layer:Layer->New->Adjustment Layer. Name it 'Global glow'. Apply glow effect to this layer: Effect->Stylize->Glow. After that place it above 'vignette' layer and also put 'Flare' layer on the top of all layers. Adjust settings of the glow.

With 'Global glow' layer selected, hit 'T' on the keyboard. Reduce opacity value to 25%. Now you can render out your scene! You can play with color correction of the whole scene, add some titles, spaceships, change textures etc. 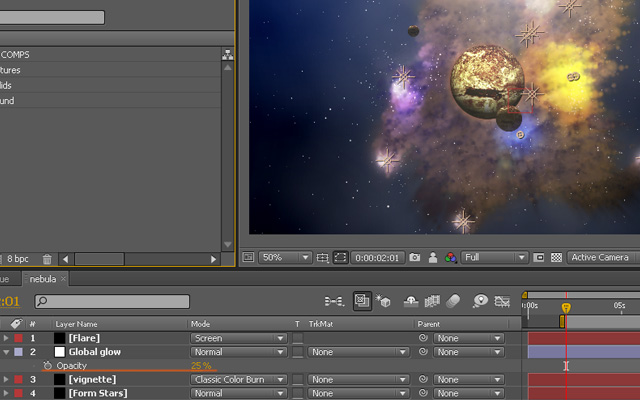 That's it. Hope you'll find this tutorial helpfull and usefull! Have a nice day and greetings from Ukraine! :) 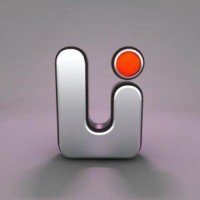