How to Bring a Still Glamour Poster to Life

In this tutorial we will face a common problem when a client gives us a still source (eg.poster /logo) and vague directions - 'it should look good'. In my case, I had a poster of a new theatrical play and less than days to bring some life into it.

The finished piece was supposed to be subtle and a bit sexy, so I decided to divide the poster into 2 sections: a background that I would reconstruct in Cinema 4D and the simpler foreground that would be done entirely in AE. Cinema 4D would let us simulate some physics and would bump up the 'motion value' of the original still graphic that is much harder to depict as being affected by forces. The poster can let us hide the 'stitches' from C4D so we won't have to spend so much time with compositng - and time is money here, so we cut where we can.

The foreground is a bit more static since we only can afford to make subtle movement otherwise we distort the poster so much that it becomes distracting. We can safely put a little motion into her hands, and reveal her tattoos while still maintaining the original message of the poster. In my final version I also added some face movement with a displacement map as a bonus.

Hope you'll enjoy this breakdown and get some cool new ideas out of it. 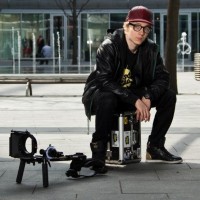 Pawel Lukomski
Pawel Lukomski is a creator of Studio 35 a polish movie label. It was first established in 2001 as an collective that produced independent films and has been developing ever since. Round about 2009 Studio 35 widened the scope of it’s projects and started to design clips especially for dancers, for which it is now most famous in Poland and abroad. After a short pause in independent films and other forms, that was used to develop new skills and movie techniques Studio 35 came back. With a diverse offer ranging form spots and trailers to videoclips and animations S35 is well known for it’s distinct visual style which incorporates VFX and dynamic editing techniques.
Weekly email summary