In the sixth part of the Warrior series, I'll give you an overview of how to add a few more accessories to the character and we'll look at how these can be textured using Polypainting in Zbrush. We'll also generate a Normal map and apply it to the character back in Maya.

This is where left off at the end of the last part of the tutorial. At this point, I want to add few more accessories to the character. 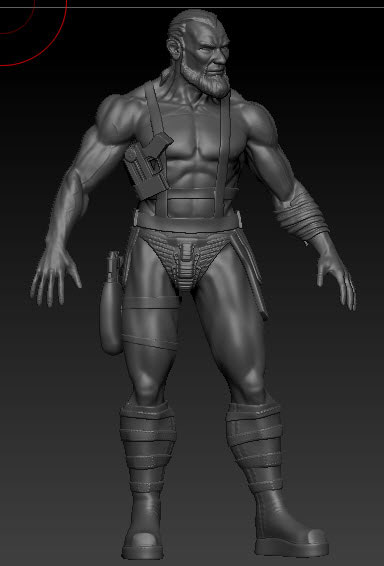 Here I’m gonna use "Transpose Master" to export the whole mesh with the current accessories at the lowest mesh level. So go to the Zplugin menu, and click on the TposeMesh button highlighted below.

Pressing this button will bring down all the subtools as one and at their lowest mesh level, as shown in the image below. 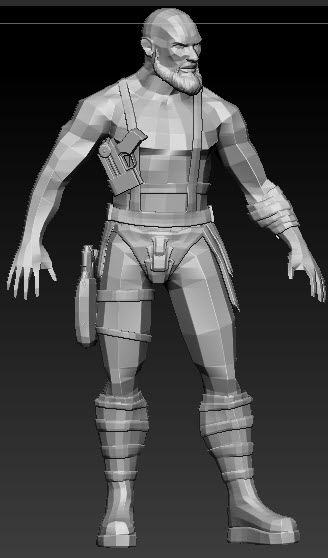 Export the model as .OBJ from ZBrush.

Import the whole mesh into Maya, this model is gonna work as reference as we add and place more accessories. 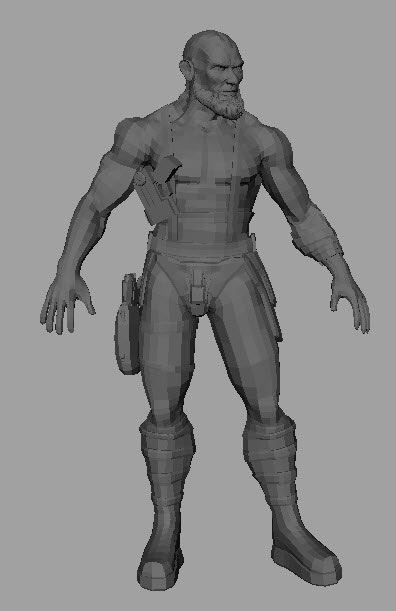 Here I've created a few more accessories and added them to the character. Once you've added your accessories, select the model you created and export it as an .OBJ from Maya.

Back in ZBrush, Import the .OBJ of the new accessories.

Select the Warrior mesh from the Tool menu and append the accessories you imported.

This is what I have after importing mine. 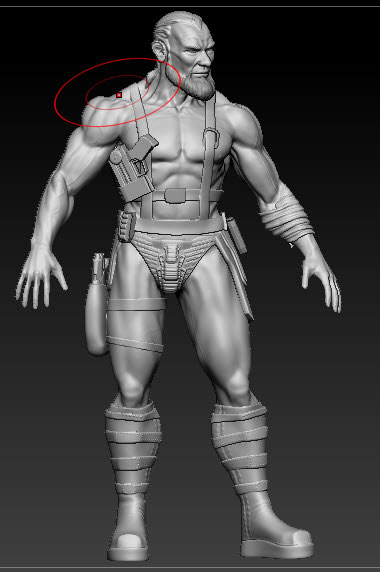 In the next few steps I’m going to ‘Polypaint’ the boot. So select the Boot subtool from the Subtools menu under Tools. 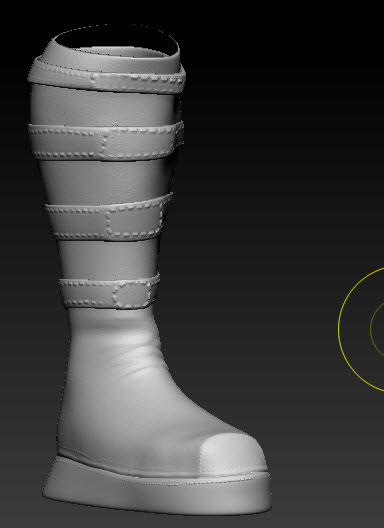 Make sure you have the BasicMaterial selected, not the default ‘Matcap Red Wax’ material. Otherwise you won't get an exact idea of the final output. 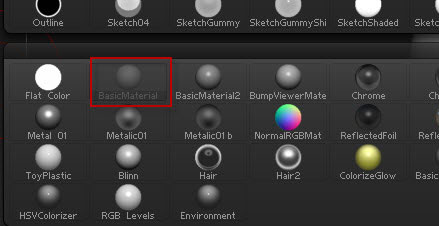 Now go to the Polypaint option in the Tools menu and click on the "Colorize" button.

Make sure ‘Rgb’ is turned On also.

Go to the Color menu, select the color you wish to use and click on FillObject.

The entire boot will be filled with the currently selected color. 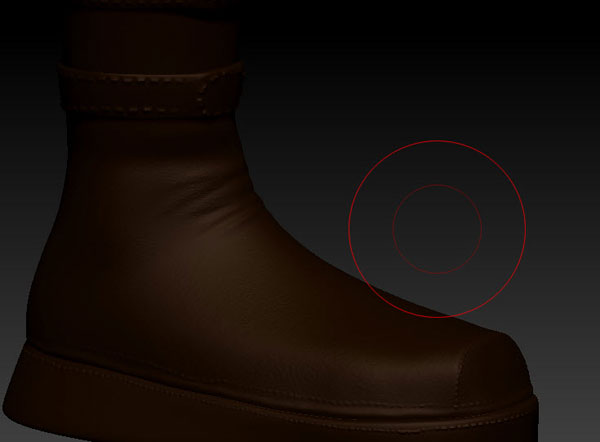 Now select the 'Spray’ stroke from the Stroke menu, and lower the value of the Color variation, highlighted in the image below.

From the Alpha Palette, Select "Alpha 23".

Make a stroke on the surface. As you can see this is going to add grain to the boot's surface.

When done, the boots should look something like this. 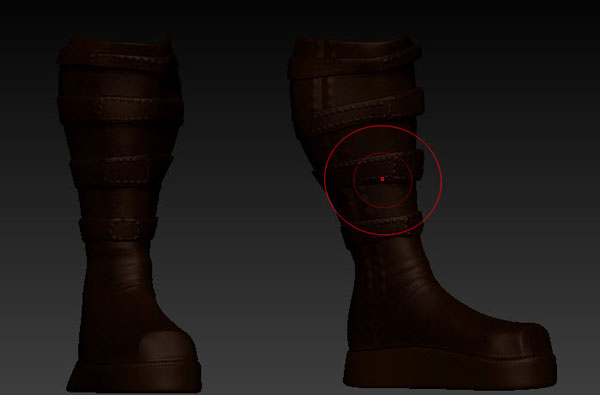 Using the same technique, I’ve polypainted the holster, belts and other leather elements. 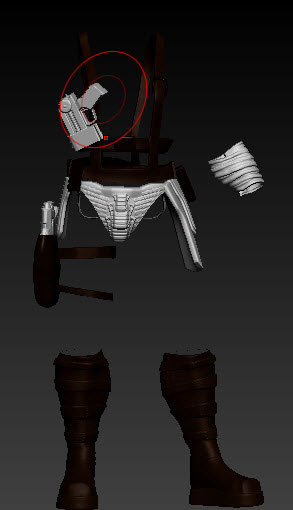 Now in the next few steps I’m going to texture the gun. 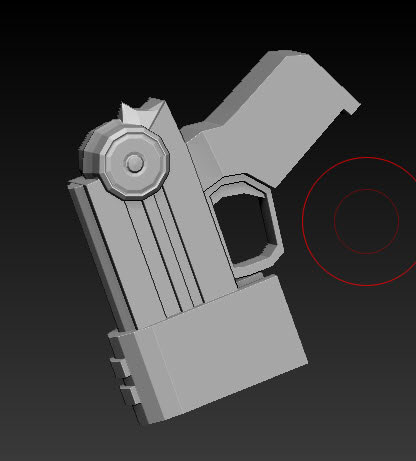 This gun already has the UV layout done. To see this, click on the ‘Morph UV’ button in the ‘UV Map’ options of the Tools menu.

It will show the UV layout of the selected subtool on the canvas.

This is the image I’m going to use to texture the gun.

I opened the image in Photoshop and changed the color using ‘Hue/Saturation’ (Image > Adjustments > Hue/Saturation.) 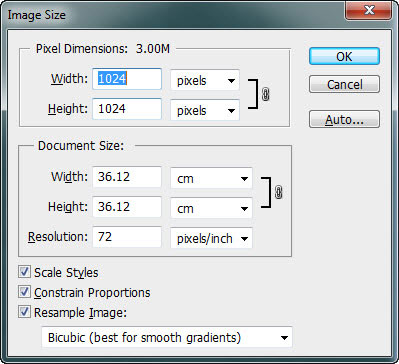 From the Texture menu back in ZBrush, Import this image. 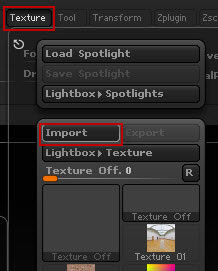 Go to the Texture Map options in the Tool menu, click on the square button and select the image we imported in the last step. 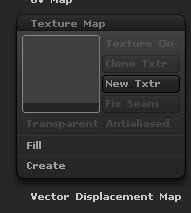 Click on the Projection Master button or Press G on the keyboard. And then click on the Drop Now button.

Before starting work, make sure the Zadd & Zsub buttons are Off.

Select the Single Layer Brush from the brushes menu.

Select Alpha 04 from the Alpha menu

Start painting on the edges of the gun as to give it a chipped off effect, using the same technique add some scratches on the surface as well. Once you’re done painting, press G on the keyboard and select Pickup Now. 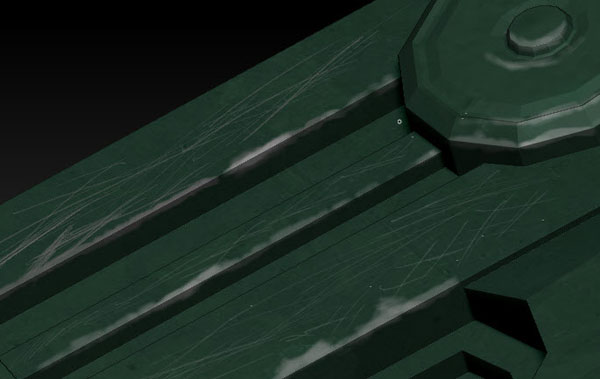 Use the same techniques to texture the other parts of the gun. This is what mine looks like when finished.

Once you’re done, click on the Clone Txtr button found in the Texture Map palette.

Clicking the ‘Clone Txtr’ button will copy the texture map into the Texture menu. From there, first select it, then Flip it Vertical and finally export it by clicking on the Export button.

Follow the same steps to texture the second gun. 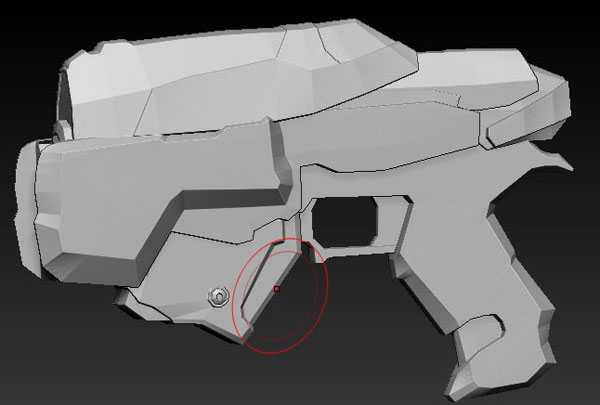 Using the same process, I’ve textured the other accessories which already have their UVLayouts. Here Zapplink can also be used, as I discussed in an earlier part of the tutorial. 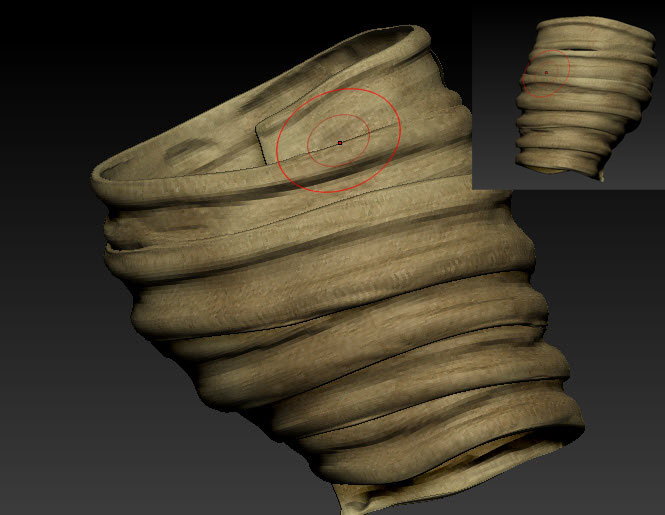 This is what I have after texturing the remaining accessories and parts. 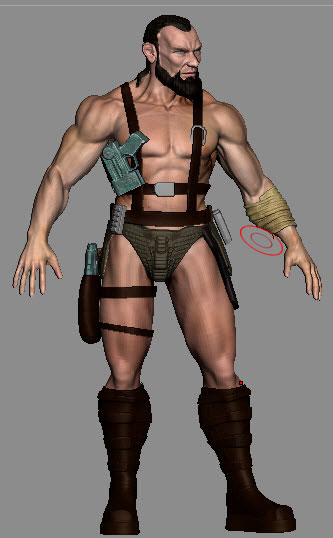 For the subtools that don’t yet have UVs, we need to create UV coordinates so we can generate a texture map from the Polypainting we've already done. 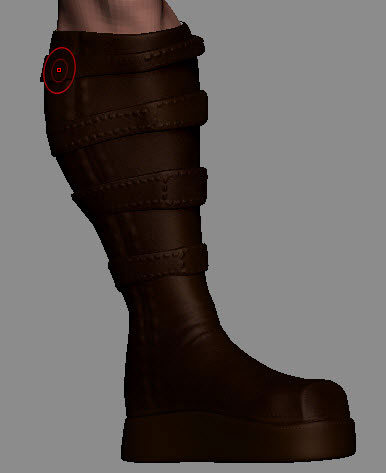 Bring the Boot Subtool down to it’s lowest subdivision level.

And Export it as .OBJ. 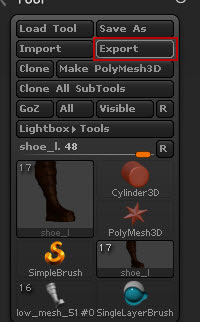 Back in Maya, Import the Boot .OBJ and get create a UV layout for it. Once done, Export it out of Maya as an .OBJ once more.

Back in ZBrush, Import the new UV mapped boot model at the same subdivision level.

Now to convert the Polypaint to a Texture map. Select the subtool, then specify the Resolution of the Texture and click on the New from Polypaint button. 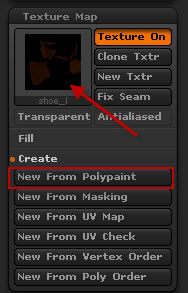 This is the Texture map we get of the boot, which I’ve already Cloned, Flipped and Exported. 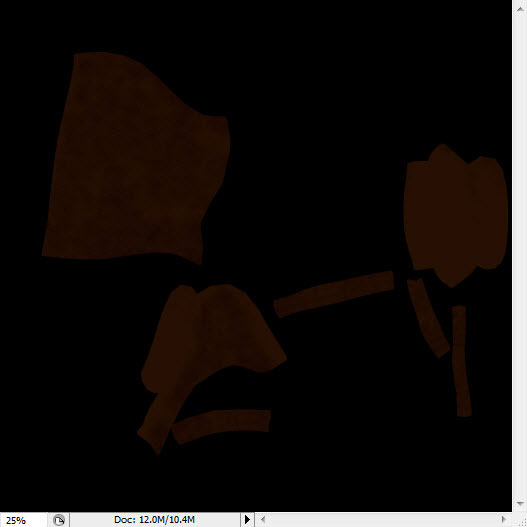 And here's the Texture map for the second boot.

Since the boots and cloth on the hands were on the same UV space, I’ve brought all three images into Photoshop and combined them into a single texture.

Now in the next few steps I’m going to generate a Normal map for the body, and apply it to the model in Maya. 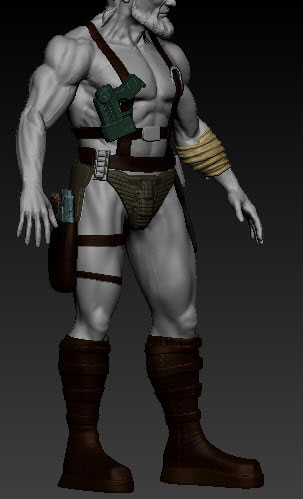 Select the body from the subtools menu and go to the ‘Normal Map’ option in the Tools menu. Make sure the settings are the same as shown below and then click on the Create NormalMap button.

Zbrush may take some time to generate the Normal map. Once it’s finished, it should look similar to the image shown below.

Now Clone the Normal map using the ‘Clone NM’ button, and then from the Texture menu, Flip the image vertically and Export it.

Now Import the model back into Maya, assign a shader to the body and from the shader’s attributes, click on the Channel button next to Bump Mapping.

And select File, as shown in the image below. 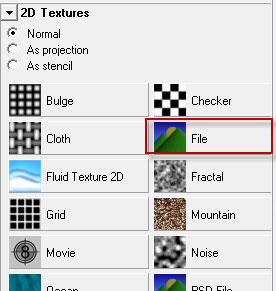 Under the 2d Bump Attributes of the Bump, select ‘Tangent Space Normals’ in the pull-down menu. 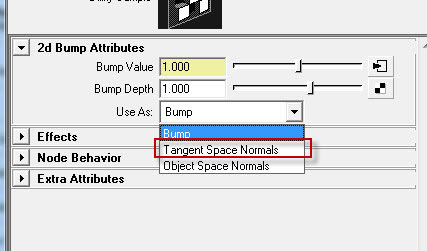 And from the File Attributes menu, select the Normal map we generated in Step 56. 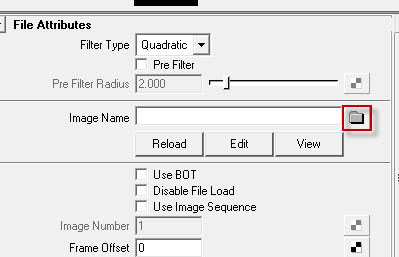 Next turn on the High quality setting for the viewport. And this is how the model should look with the Normal Map applied.

This is the result I ended up with at the end of this part of tutorial. In the next and final part of this series, I'm going to explain how to generate the Displacement map, and Apply it in Maya for rendering using Mentalray. 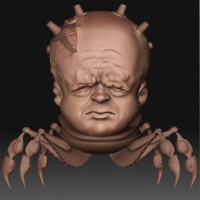 Ranjit Singh Rana
I'm Cg specialist, specialized in modeling and sculpting but I'm also experienced in different aspects of the 3d pipeline i.e, texturing, lighting and rigging. While the main 3d application I work with is Maya, I also have good experience in 3dsmax. I have experience working in a production house, and have worked on many national and international projects ,for now I'm Working as a 3d trainer in a renown institute of the region. In my spare i also work as freelancer.
Weekly email summary
Subscribe below and we’ll send you a weekly email summary of all new 3D & Motion Graphics tutorials. Never miss out on learning about the next big thing.
Advertisement
Translations