Over the course of this two part tutorial, Konstantin Muromtsev will show us how to create a truly unique, cinematic ship escape animation in Cinema4D. You'll learn how to use various tags, the Mograph tracer object, SweepNURBS and how to switch between multiple camera angles using the Stage object. This tutorial will help you understand some of C4D's post effects and how to create simple, yet effective standard and sketch materials for the project.

We will start by sketching the basic idea, one of main objects in this scene are tentacles. To create them, we'll use the "Mograph Tracer" object and Sweep NURBS. But first, we need to create the path for the object that will be traced. So to start create a spline (Objects > Create Spline). I suggest to using a "Linear" spline, then converting it to "Bezier".

Create a Platonic object (Objects > Primitives > Platonic), and change the Type to "Dodeca".

Add a "Align to Spline" tag to the Platonic object. Use the spline from step 1 in the "Spline Path" field, and add a keyframe to the "Position".

Add another keyframe to the Position (for example 16% at frame 30) to make the Platonic object move. Create a "Tracer" object (Mograph > Tracer) and add the platonic to this object. Move to Frame 30 to see the effect of the Tracer object and then move back to Frame 0. 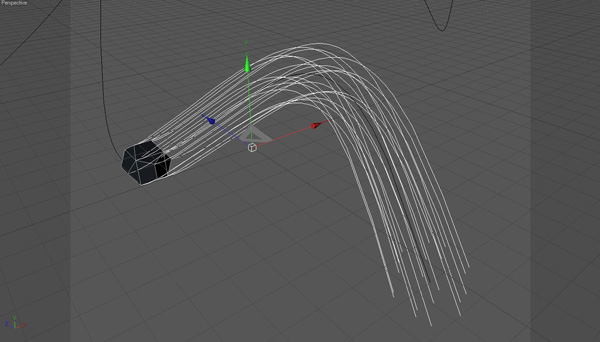 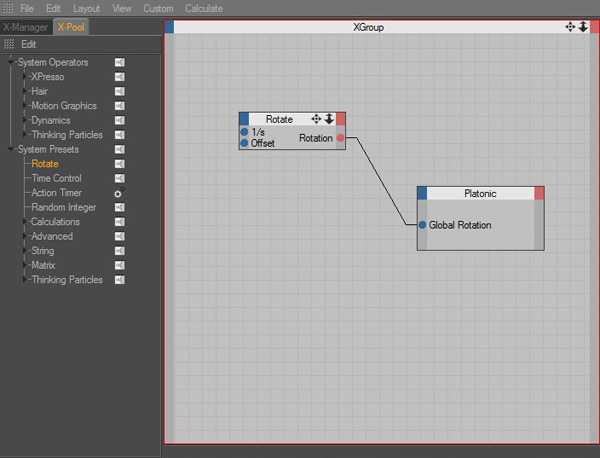 Move to Frame 30. As you can see the traced path is looking much more interesting now.

Create a Sweep NURBS object (Objects > NURBS > Sweep NURBS) and add the Tracer object and Rectangle spline to it. In the Sweep NURBS attributes, change the scale graph so it will be smaller at the end.

Make the Platonic object not visible in both the Editor and the Renderer.

Next create a Sphere object, scale it up and place it at the start of the spline. The tentacles will grow from it. 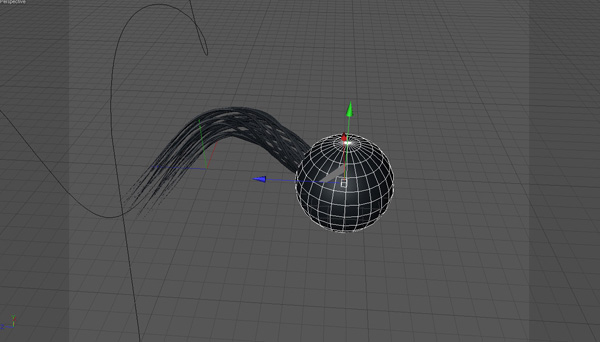 Now we need to create a ship that will be escaping from the tentacles. Since this tutorial is not about modeling, I will only give a brief description of how to create it. 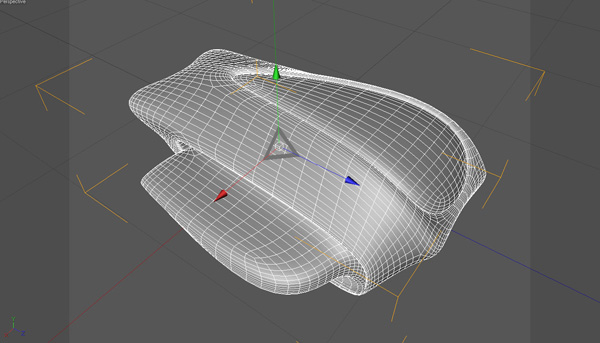 Start with a basic Cube shape and using the Extrude, Knife, Extrude Inner and the basic Move/Rotate/Scale tools, create a shape for the ship you're happy with.

To create the flames for the ship's nozzles, start with a Sphere object. Rotate it and using the brush or magnet, make a flame-like shape.

Decide where you will use different materials and set selections (or split selection). 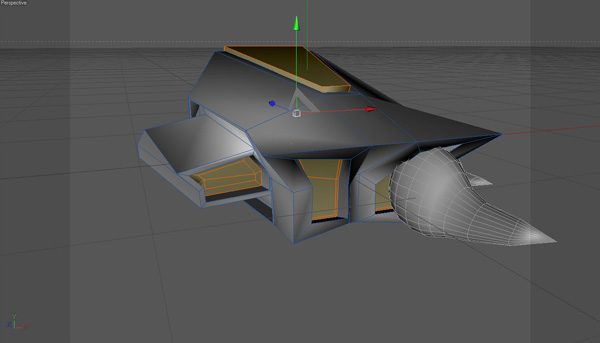 Use Symmetry (with a ZY symmetry plane) on the flame shapes. Then create a "HyperNURBS" and add the ship and flames to it. 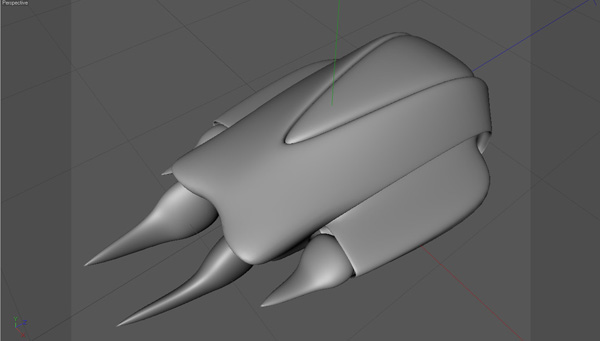 Create a Null object, add Align to Spline (like in step 3.) Add the ship to this null object, and make sure all the ship's coordinates are set to 0. 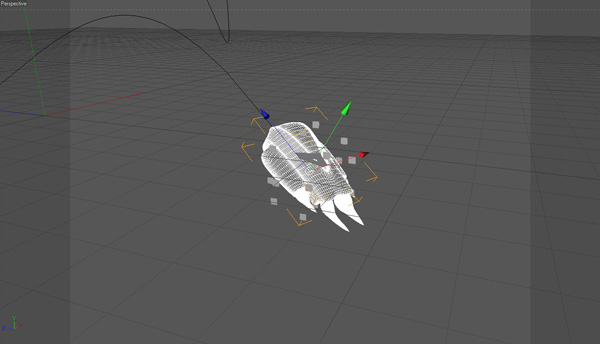 Move a few frames forward. It is not unlikely that the Sweep NURBS will intersect with the ship's geometry. So to correct that, move the ship forward on the Z axis. 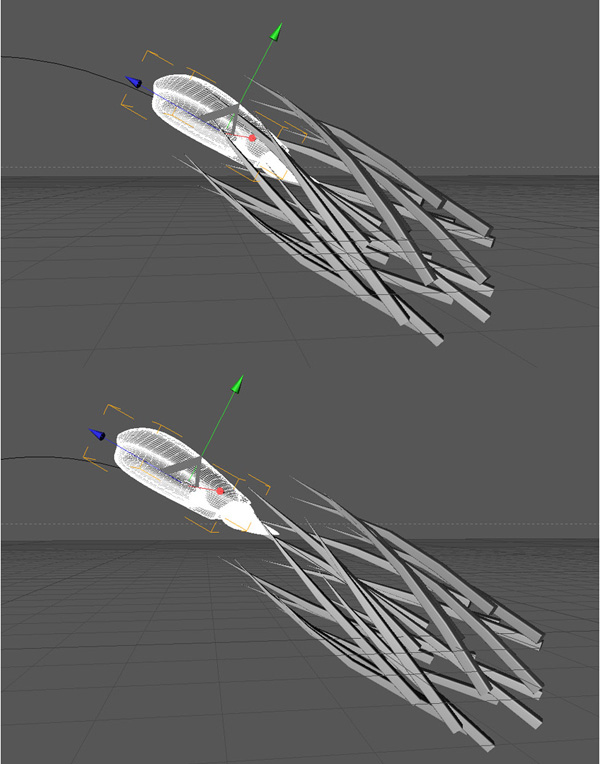 Open the project settings and increase the "Maximum Time" and "Preview Max Time" (to 220 for example.)

Delete the keyframes at Frame 30 (which we used to test the animation) and add keyframes near the end of the document (100% values for both Align to spline tags). Now we have a basic scene - the next step is adding the materials, cameras and so on.

Time to place the cameras. We will go from simple cameras with rotation only, to chasing ones. Select an interesting point of view via the Editor Camera and add a Camera object to the scene.

This camera will focus on an object using only rotation. Using the target tags is usually not a great idea. Use manual rotation instead and add keyframes using the "Record Active Object" button (F9 on keyboard). This method usually creates unnecessary data (like scale keyframes for the camera) but is good for fast keyframing. 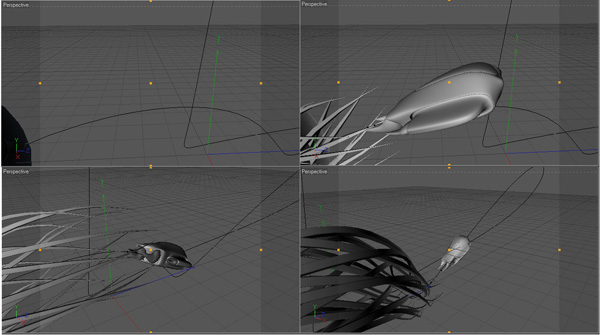 The next camera will be moving ahead of the ship and will show us the front view. Select the point of view with the editor camera, and create a Camera and add it to the Null object containing the ship. This will make the camera move with the ship, and we will still be able to control it's movements.

Add a "Vibrate" tag to this camera, check "Enable Position" and "Enable Rotation". Experiment with the "Amplitude" and "Frequency" values, but keep them low to avoid the possibility of losing the target.

Play the animation. The "Vibrate" tag will move and rotate the camera according to the "Amplitudes" and "Frequencies", making the movement of the camera more interesting.

The next camera will be placed inside the tentacles and will move with them. So place the camera behind the ship.

Create a null object and add an "Align to Spline" tag to it (it's possible to copy the tag from another object by holding ctrl, while moving the tag). Add the camera to the null object. The point of using a null object is for the possibility of controlling the camera's movement more freely. 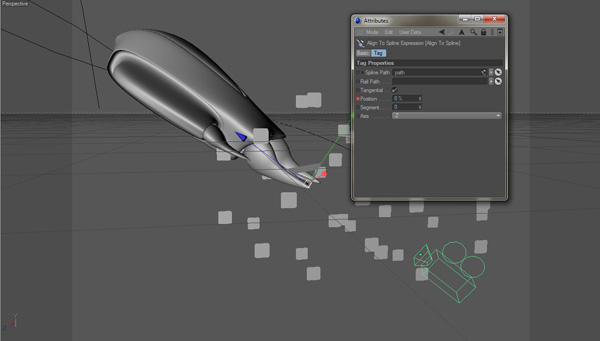 Copy the "Vibrate" tag from the previous camera. Adjust it if needed.

Using Editor camera, select another view and create a camera. 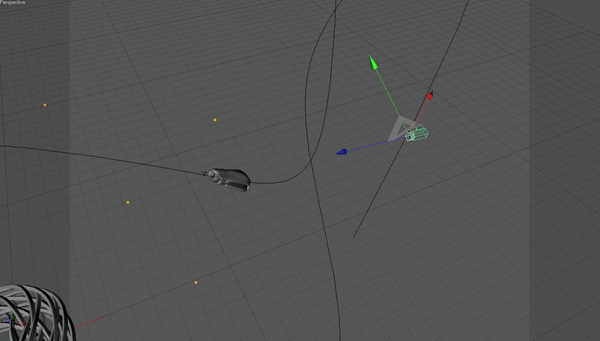 Animate the camera by moving and rotating it, then using the "Record Active" object function (F9 on keyboard). Remember to use as many keyframes (steps) as needed to achieve a smooth feel. 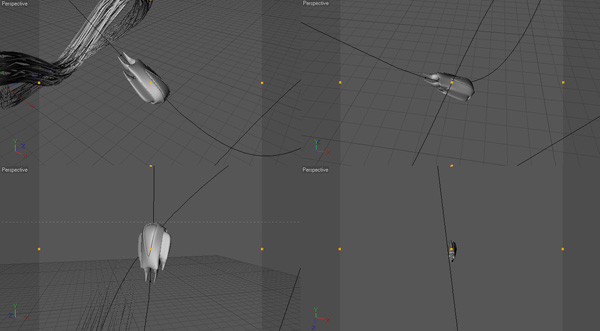 Look at the scene, and adjust the positions of the cameras and keyframes. You can add more cameras if needed (for example: an overview camera, that will show the entire scene, or a camera similar to the ones in Steps 21 or 24, but at another angle).

For the second cluster of tentacles at the end of the scene. Create a new spline so it's almost intersecting with the existing path. 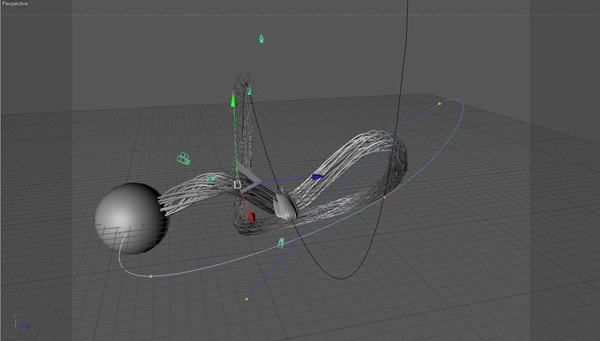 Copy the "Sweep NURBS" object (with all the objects in it of course), and change the "Spline Path" in the "Align to Spline" tag for the Platonic object. 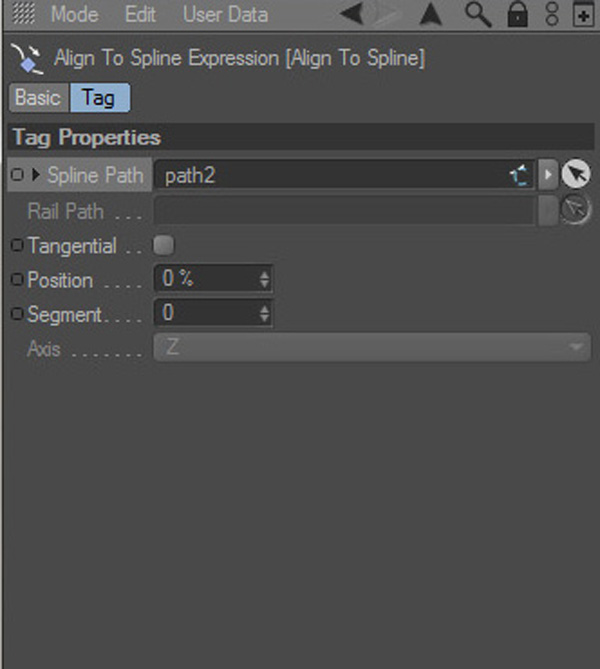 Decide when the second tentacle will move, and then add keyframes to the "Position" of the "Align to Spline" tag. 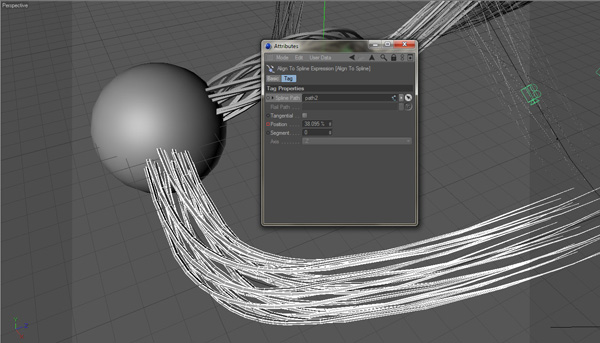 Now we have fully animated our scene. To use multiple cameras during the animation (and rendering), we need a special scene object. This is called a "Stage object" (Objects > Scene > Stage). It determines when the camera, sky, environment and so on are used in the animation. With this object we can easily switch between the cameras in the scene with only one keyframe.

Continue to work on the cameras. The important thing here is to allocate the correct amount of frames for each camera, considering that they're already animated. Also this kind of work with cameras requires constant tweaking of their keyframes.

At this point doing a test render is a good thought. Open the Render settings (ctrl+B) and change the output options (I changed the Film Aspect to 1.778 - 16:9). Also change the "Frame Range" to All Frames.

At the "General" options rollout, change the "Render Engine" to Software Preview ( we don't need to waste time on a full render, since we only need to see the motion). Render the scene.

Time to add the first basic materials. Create a new material (double click in material manager). For "Color", I used orange (R:255 G:138 B:0). Also Uncheck "Specular", because we will not have any lights in the scene except the default lighting.

Check the "Reflection" channel and decrease the brightness to 25%. We will use reflection and luminance objects to fake lighting. I used this as the ship's main material.

Duplicate this material, and change the "Color" to default, decrease the brightness to 10%. 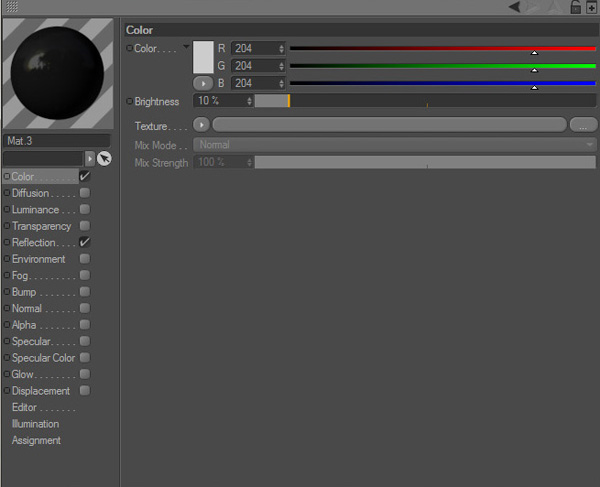 At the "Reflection" rollout, decrease the brightness to 5%. I used this material for the ship's windshield. 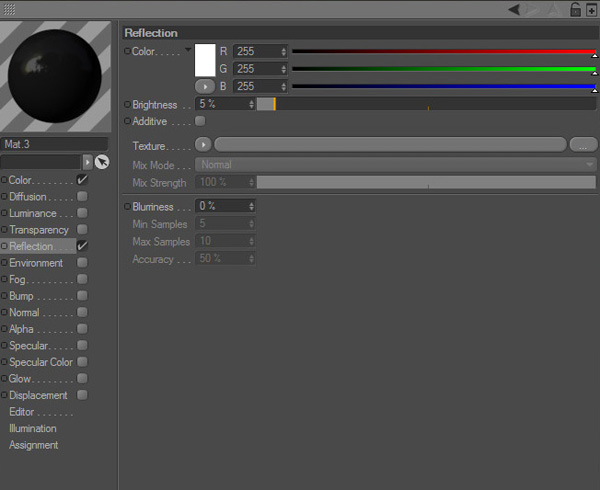 Create another new material, and change the "Color" to White, set the Brightness to 30%, and uncheck the "Specular" channel. This material will be for the tentacle base.

Duplicate the material, and slightly decrease the "Brightness" of the "Color" channel. 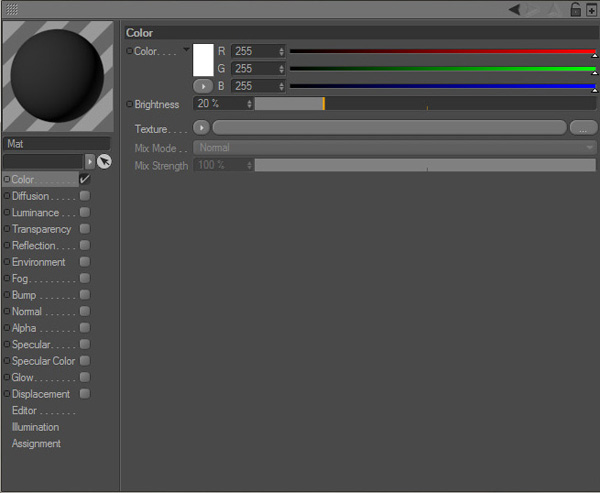 Check off Reflection, and decrease the brightness to 30%. This material will be assigned to the tentacles.

The last standard material is for the flames. Duplicate the nozzle's material and slightly change the color.

Check the "Transparency" channel, and Copy the color from "Luminance" channel, decrease the brightness to between 70-80%.

Assign the created materials to the corresponding objects (except for the "White Luminance" material, since we don't have the object for it yet). 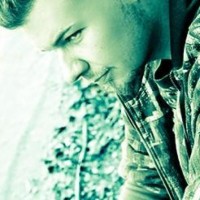