Create a new Cylinder with 18 sides and Convert it into Editable Poly, and then add 10 horizontal loops as shown.

Select every second loop polygons and apply a Bevel with a negative Height value to push them into the surface. And then on the end polygons apply another Bevel, but this time with Zero Height.

On the top polygon, we apply a Bevel 3 more times and then an Extrude once with a negative Height, until we get something like this.

On the bottom polygon we apply a Bevel twice. The second bevel needs to be with Zero Height and after that, Extrude once as shown.

Continue shaping the piece by performing an Inset, an Extrude, another Inset and a final Extrude.

Apply a Bevel with Zero Height, an Extrude, an Inset, and another Extrude as shown. 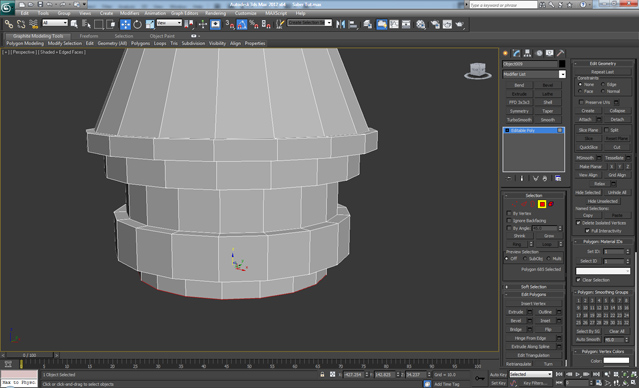 Again apply a Bevel with Zero Height and then Inset again and Extrude 3 times.

Continue with an Inset, Bevel, and another Inset.

Now Create a new Cylinder with the same Height as the height of the polygons we just extruded. On the cylinder's top polygon apply an Inset, Extrude, Inset, and then Extrude again.

Continue by applying a Bevel with Zero Height, and then Extrude 3 times and Inset. 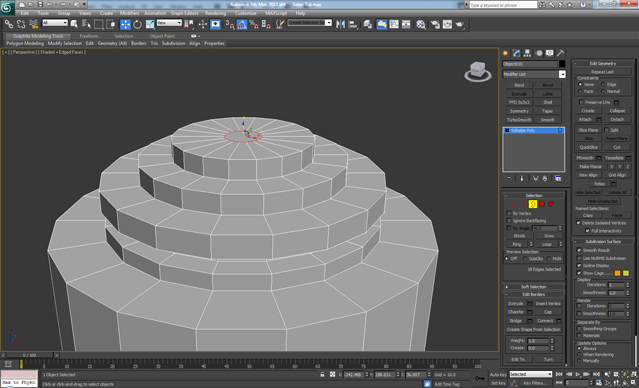 On the cylinder's bottom polygon we do the same thing. But this time, only apply the Extrude and Inset twice. The third time it needs to be a Bevel and then an Inset.

Combine the two elements using Attach, and then connect the polygons together with the Bridge tool.

On the polygons selected below, we apply an Extrude twice and then shift the vertices until we get a straight corner.

Now select the polygons on the sides and apply an Extrude to them, as shown.

On the polygon on the far side, apply an Extrude twice and then Extrude 3 more times until you get something like this. You also need to shift the vertices a bit to get the desired shape.

On the 3 polygons on the other side, we apply an Extrude 3 more times and then by shifting the vertices again, create a shape similar to this.

Using Bridge, we connect the polygons on the two elements so they become a single piece of geometry. After that add loops as shown. 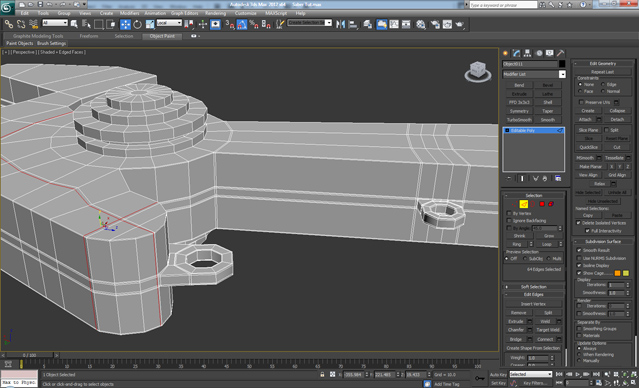 Finally apply a Chamfer on all of the edges as shown. 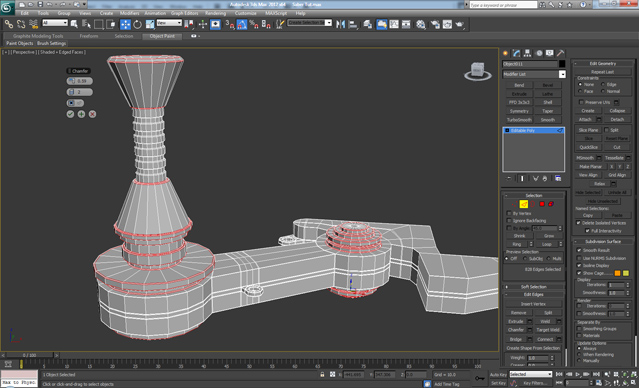 Create a new Tube with 16 Sides and position it as shown. Finally apply an Extrude to the two side polygons, and shift the vertices to create a base for the element.

Add loops as shown, and the combine the elements together using Attach. 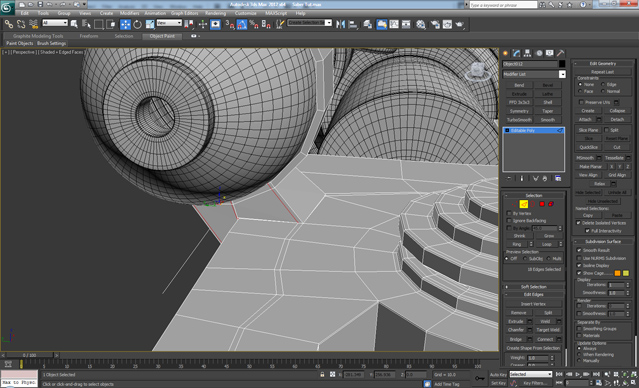 Using the shortcut Alt+Q we go into Isolation Mode in order to see only the element we have selected, and then add a new edge as shown. 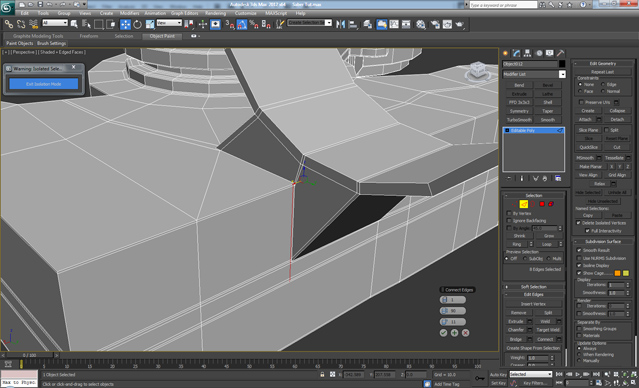 Connect the two vertices by using Connect, and then Delete the polygons on the inside part.

Select the two holes with Border, and connect them using Bridge. After that add new edge loops as shown. 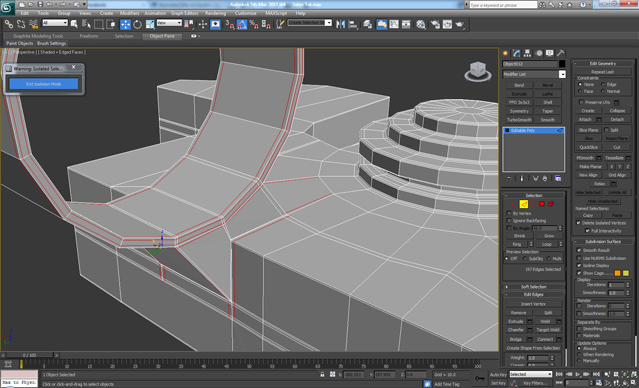 On the polygons on the bottom side (highlighted below) we apply an Inset with a low Amount.

Now using the same techniques we used to create the back handle (steps 78-84.) Create this new element. 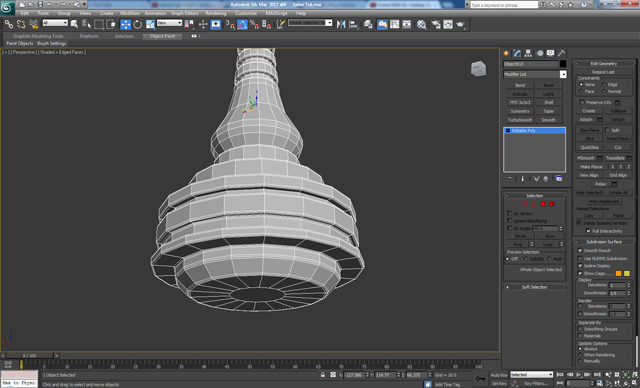 Next Create a Box with Length Segs: 2, Width Segs: 4 and Height Segs: 1 and Convert it into Editable Poly.

On the front two polygons apply an Extrude twice, and shift the vertices to create a rounded shape.

On the back polygons, apply an Extrude twice and then shape it something like this. 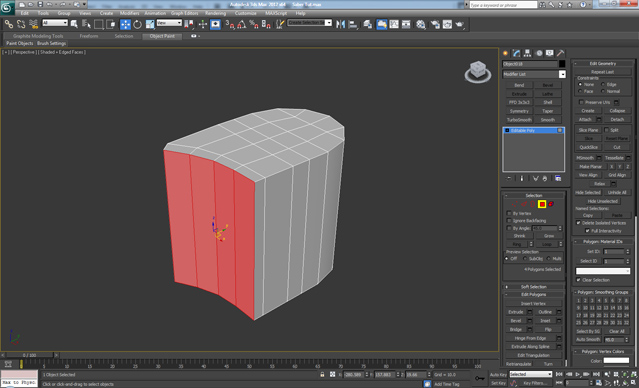 On the side polygons apply an Extrude 3 times and shift the vertices, until you get such a shape. 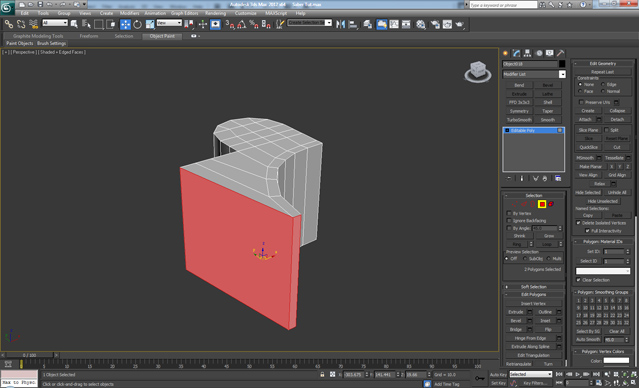 Add a new edge as shown and using Connect, connect the selected vertices. 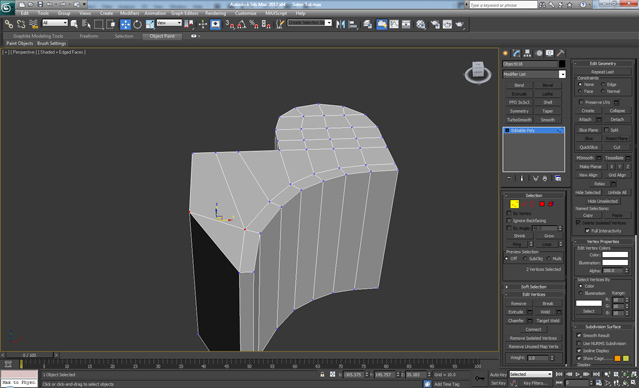 On these 7 selected polygons, apply an Extrude 3 times, and after each extrude Scale them on the Z-Axis.

Now add two loops close to each edge as shown.

Add 4 vertical loops and then 2 horizontal edges as shown. 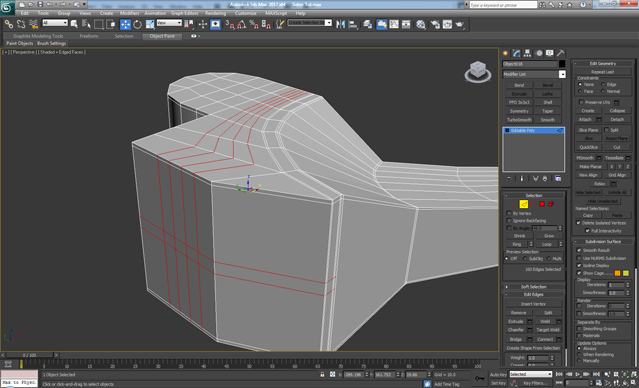 As we did previously, create a Tube and connect it to the element. And then add loops as shown.

Create a Cylinder with 20 Sides and Convert it into Editable Poly. On the sides of the cylinder, add 4 loops (close to each end) and Scale them on the Z-Axis. Finally Scale the end polygons on the Z and Y Axes.

Select the polygon loops, Scale them and move them up as shown.

Continue by applying an Inset, and after that Scale the polygon on the Z-Axis. Apply another Extrude and finally Delete the polygon.

On the front end polygon apply a Bevel twice, Extrude again and then Bevel twice with a negative Outline and Inset amount.

Now apply a Bevel, an Inset and another Bevel as shown.

Using Attach, combine the two elements and apply a Bridge to the selected polygons.

Finally, apply a Chamfer on most of the loops as shown.

Next, create a new Capsule object with 12 Sides and Convert it into Editable Poly. After that Delete the back part and close the hole using Cap, and then on the new polygon apply a Bevel with Zero Height and then Extrude it. 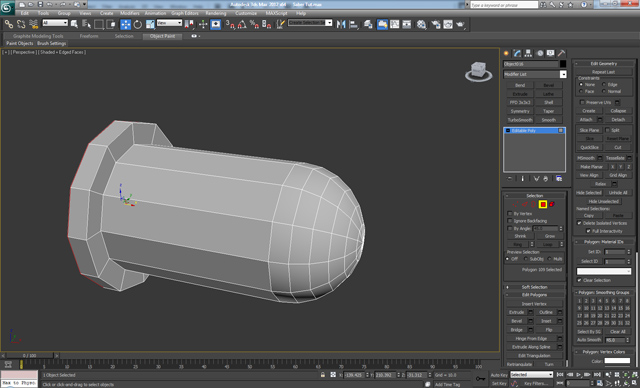 Continue by applying an Inset and then Extrude 3 times. After that, Inset and Extrude again.

Again apply an Inset and an Extrude. After that apply a Bevel 4 times with Zero Height and Extrude after each bevel.

Now apply a Bevel twice in order to get a rounded end to the shape. Then Inset, Extrude, Inset and again Extrude with negative Height. Finally Delete the polygon inside the hole.

Next create a Box and add loops as shown, Then Delete the back and front polygons.

As we did in a previous step, create a Line with 8 Sides and check on the "Enable In Viewport" option. And then using Attach, combine it with the box and Delete the polygons on each end.

With the elements selected, use the Alt+Q shortcut to switch to Isolation Mode. And then create a new Line with 6 Sides and convert it into Editable Poly, finally Delete the polygons on each end. 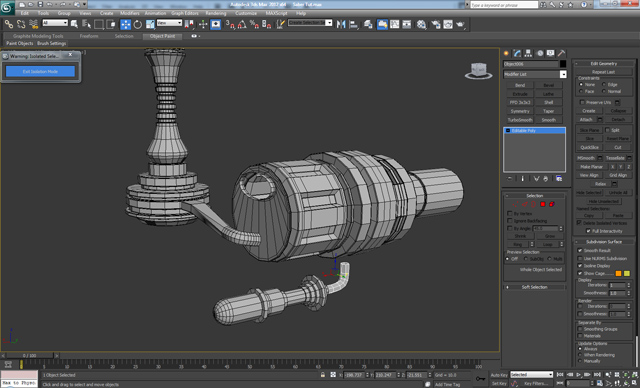 Using Attach, combine all the elements together and add 3 new edges as shown. 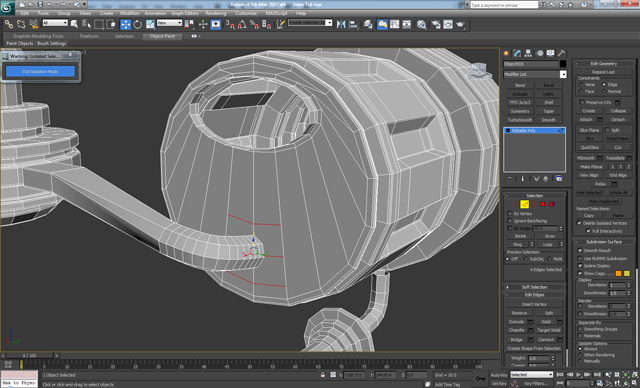 Apply an Inset to the new polygons and then Delete them. Then apply a Bridge on the hole.

Now on the bottom of the element (where we created the last line), we need to add 2 new edges as shown. 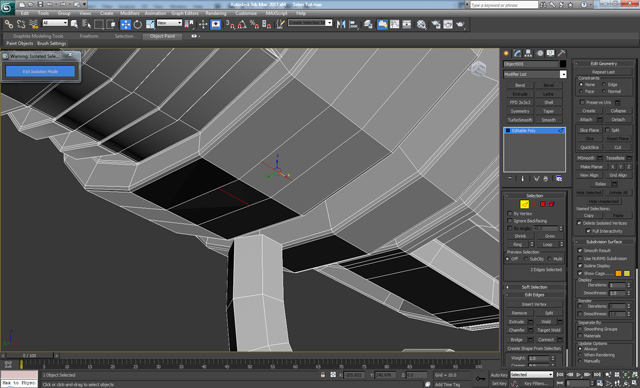 Delete the polygons between the edges we just  created and then by using the Bridge tool, connect the line with the hole. After that apply a chamfer as shown.

Select the two polygons on each element that face each other and connect them using Attach. 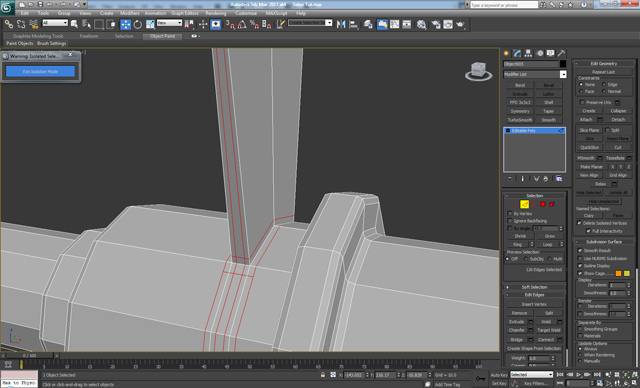 Now select the 3 polygons (highlighted below) that face towards the box and Delete them.

Finally close the holes with Bridge and apply a Turbosmooth modifier with the Iterations set to 2.

Create another Capsule (just as did for the previous one) and apply Turbosmooth - Iterations: 1.

Next, create a spiral (using a Helix spline) and check On "Enable In Viewport". Also check On the Radial option and set the Sides to 12 with a Thickness of 14-16.

On the end loops of the spiral, apply a Chamfer and finally apply smoothing.

Create one more spiral on the other side, as shown.

Create a Cylinder with 12 Sides and apply an Inset on the top polygon, then Extrude it with a negative Height value. Inset and Extrude again, but this time with a positive Height.

On the bottom polygon apply an Inset, an Extrude and another Inset.

Apply a Chamfer on each edge and then add 6 loops around the outside, as shown.

Create a Box and on the two side polygons, apply an Extrude and then Scale them on the Z and Y Axes.

Apply a Chamfer on the edges and finally apply a Turbosmooth modifier, with 1 Iteration.

Create another Box and add edge loops as shown. Delete the Polygons on the bottom and apply a Turbosmooth - Iterations: 1. 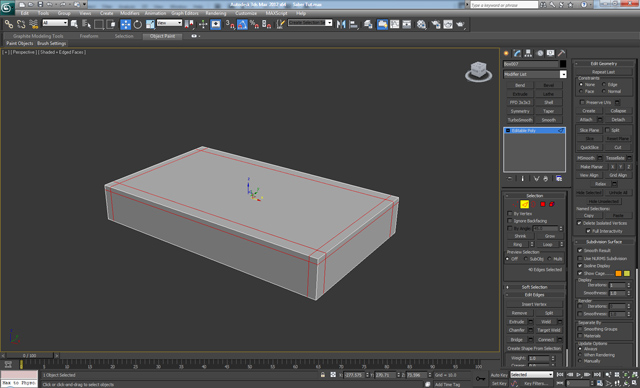 Now from the Hierarchy menu, choose Affect Pivot Only and copy the values for the X, Y and Z-Axes from the cylinder to the box. After that use the Rotate tool to make and position 11 copies of the box. 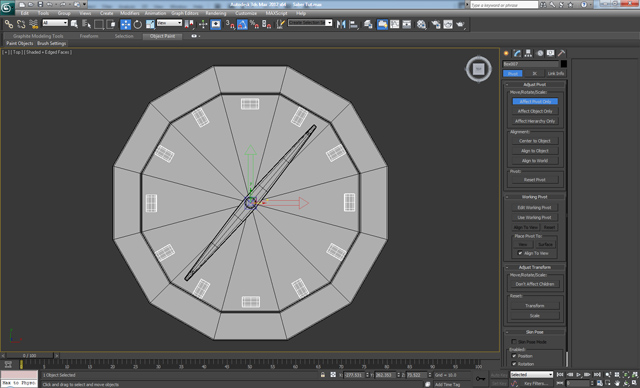 Rotate the element 35 degrees, and then make a copy of it and Rotate it 20 degrees more.

Using Attach combine the two elements together. And then with the Bridge tool, connect the polygons which face each other.

Create a Line like before and connect it to the cylinder. And then using Attach, connect the selected elements together as shown in the picture below.

Use Bridge to connect the polygons. 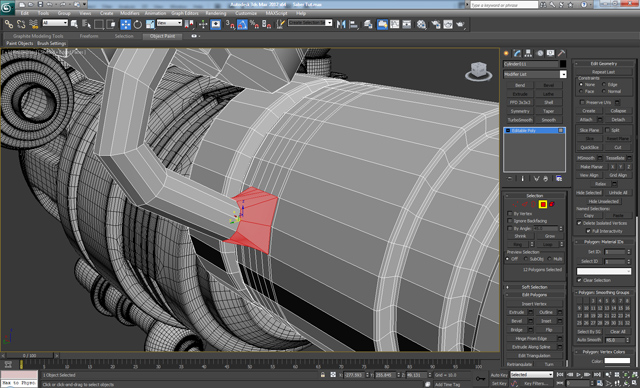 Create one more Line and Convert it into Editable Poly, then Delete the loops we don't need. Leave only the loops where they are needed to make a round shape. Finally add 2 more loops close to each other, as shown. 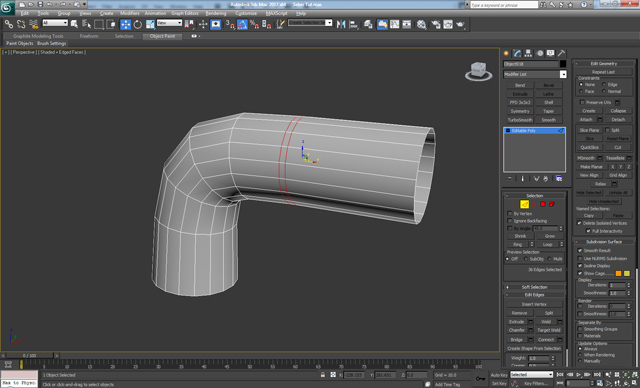 Copy and position the element as shown, and apply a Turbosmooth modifier - Iterations: 1.

Create another Line and Convert it into Editable Poly. Delete the polygons on the ends, and apply an Extrude with a negative Height on the selected polygons.

Apply a Chamfer on the edges and then add a Turbosmooth - Iterations: 2.

Go to the back handle (step 80) and create a Cylinder with the same radius as the hole in the handle. Delete the bottom polygon of the cylinder and on the top polygon, apply an Inset, a Bevel and an Inset again. Finally apply a Chamfer on the edges and then a Turbosmooth - Iterations: 2. 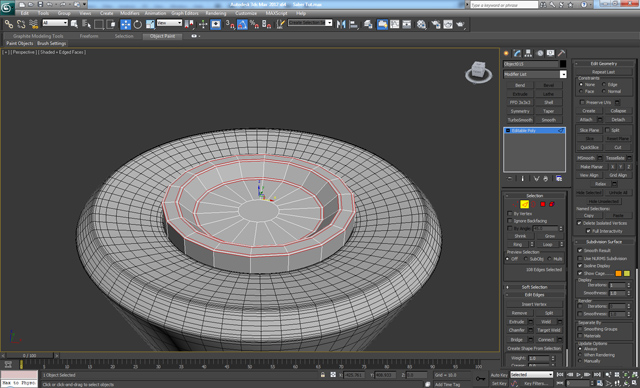 Stefan Surmabojov
My name is Stefan Surmabojov. I'm 30 year old motion graphics designer located in Bulgaria with 10 years of professional experience. Most of my time is spend working as a freelancer, but in my spare time I create tutorials for Tuts+ and templates for VideoHive. I love photography, 3D, and VFX.
Weekly email summary
Subscribe below and we’ll send you a weekly email summary of all new 3D & Motion Graphics tutorials. Never miss out on learning about the next big thing.
Advertisement
Translations