In the fifth part of the Achieving 3D Realism: Reception Area Render With 3D Studio Max & V-Ray Premium series, Jamie will cover post-production, one of the most important aspects of achieving a great looking final image. While getting the best possible render out of your 3d package is always the ultimate goal, in most cases renders will benefit greatly from further refinement and retouching in Photoshop.

The final step will navigate users through the intricacies of using the best post-production approaches to help enhance and finalize the 3d shot at the highest level. Most post-production effects implemented in this tutorial are kept in layers with their respective masks to achieve the ultimate control over the final results.

Photoshop is very powerful and useful when addressing quick changes and/or effects that would otherwise be time consuming to address in 3Ds Max alone.

Having said that is equally important to have relatively decent renders from Max, at one’s disposal for Post-Production. This work process will ultimately prove very fruitful for one’s final piece.

In this final part of the tutorial, we will bring in the main rendered image, along with its pre-rendered element.

79. Let’s start by renaming the “background” layer. To do so, right click and choose the “layer from background” option from the list. In the “new layer” dialog, name the layer as “raw render” and “ok” to close it. See fig.79.0 and 79.1 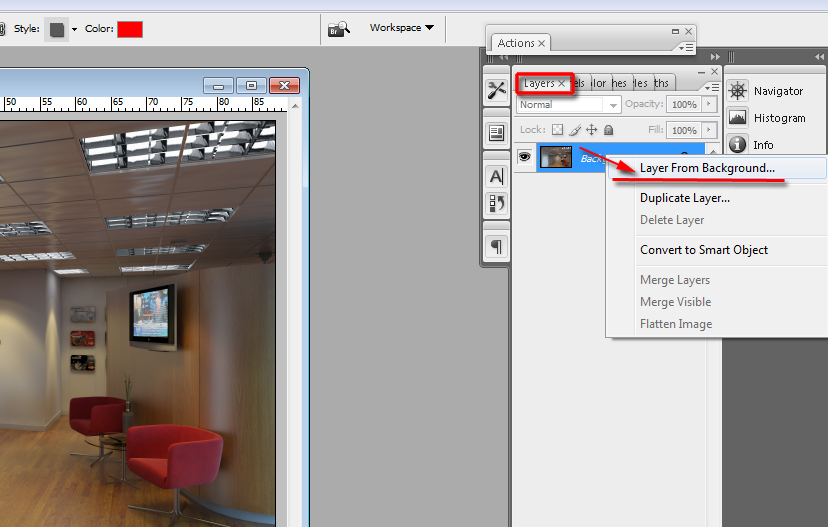 81. Prior to begin tweaking with the “raw render” layer, open the photo reference and the render element (vraywirecolor render).

The photo reference will be used to help match the current render more closely, and the “vraywirecolor” render element will be used to select and save specific selections. See fig.81.0 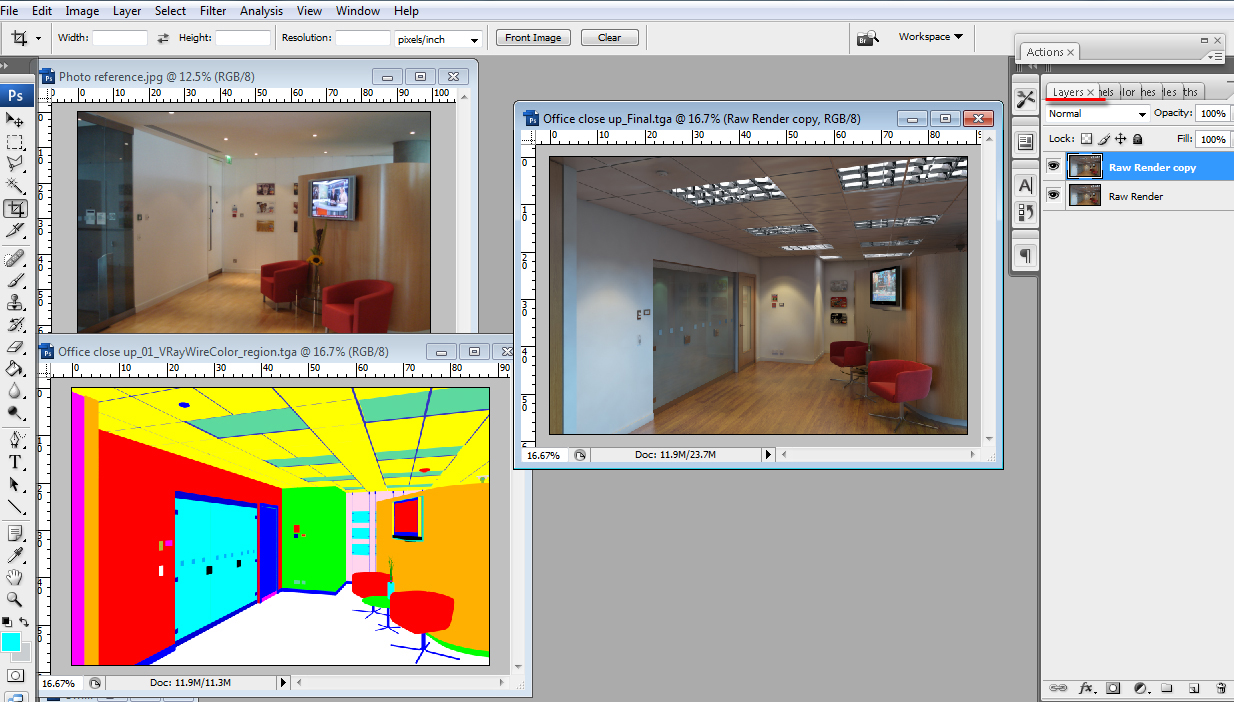 82. Select the “vraywirecolor” document and duplicate it as previously done. In the “duplicate” layer dialog, choose the destination document to be the “office close_final.tga” and change this new layer name to “wire color”. See fig. 82.0, 82.1 and 82.2

83. The first step is to try to match the TV screen glow intensity with the photo reference.

A- Select the “wirecolor” layer.

B- Enable the “magic wand” tool (w) and set its tolerance to about 5.

C- Select the TV color (red) by clicking this tool in the relevant area. See fig. 83.0

85. Next, copy and paste this layer selection (ctrl+C and ctrl+v). Name it “tv screen”.

Also, change its colour to green, to differentiate it from the other layers. See fig. 85.0 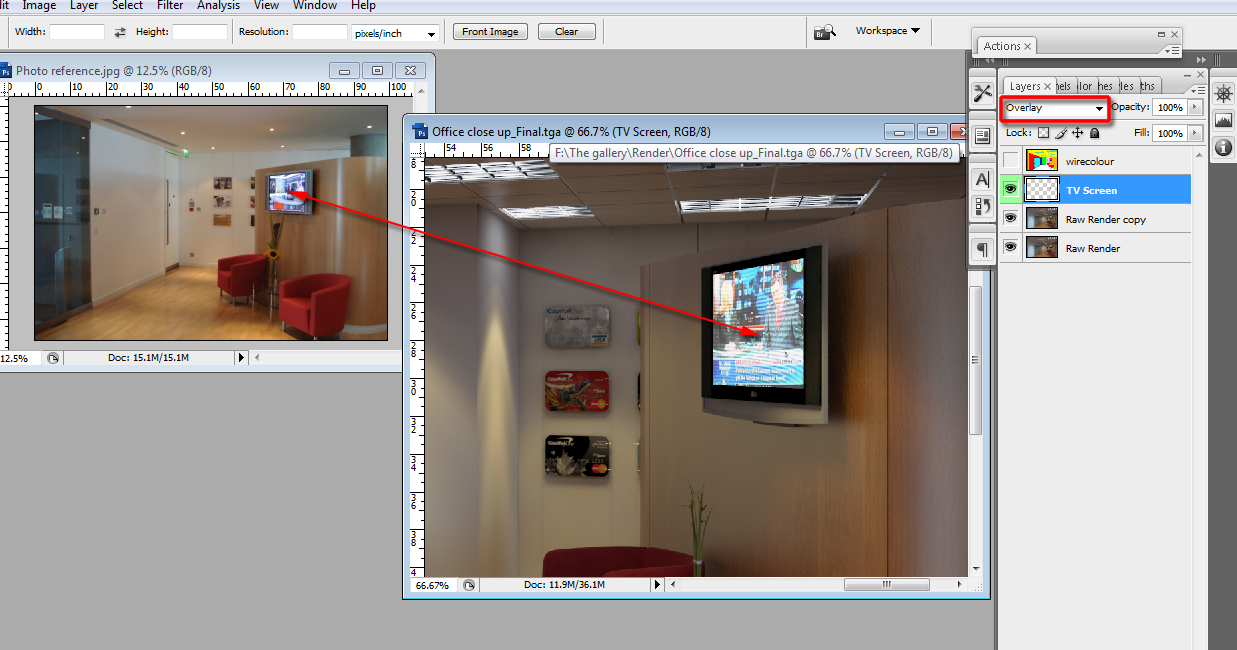 87. The next material to match is the “curved wooden wall”.

A- Select and turn on the “wirecolor” layer visibility.

88. While the selection is still on, turn off the visibility of the “wirecolor” layer and select the “tv screen “layer.

Next, add an “adjustment layer” by clicking on its icon. Choose the “levels” adjustment from the pop up list. See fig.88.0 and 88.1 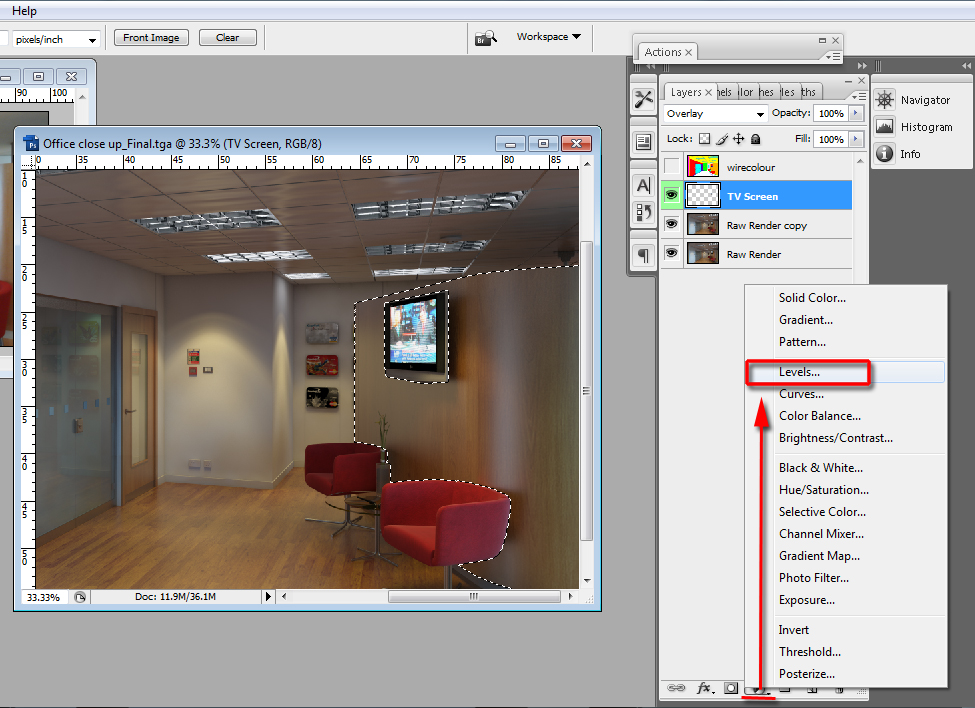 90. Next we are going to brighten up the scene slightly with “curves” adjustment layer.

A- This adjustment layer needs to be on top of the previous one. Add the “curves” by using the steps described earlier.

B- In its “rgb” channel, add the first point on the curve with the cursor target.

C- Move it slightly up and towards the right. The image has become slightly brighter now.

D- Add the second point and move it downwards towards the left to balance the brightness a bit.

E- Open the “red” channel and add a point to its curve. Move it slightly downwards to add a bit of red to the image and match the photo more closely.

F- Open the “blue” channel and add a point to its curve.

Slightly move it downwards to bring up blue tones to the image. The overall brightness and colors are now closer to the photo reference. See fig.90.0, 90.1, 90.2 and 90.3

91. However, the TV screen and the light pattern on the wall have become bleached as result.

To correct this we are going to use the “layer mask thumbnail” and the brush tool to omit the brightness on undesired areas.

A- Select a brush tool (b) from the side tool bar.

B- On the main tool bar, click on the “brush picker” to select a smooth and feathered brush. Once selected, one can increase or decrease its diameter/size by pressing the key “]” or “[“.
When omitting areas with the brush, the “set foreground color” swatch has to be black. To add omitted areas in the document, one should switch the “set foreground color” to white. To switch between the two colors simply press the “x” key. See fig.91.0, 91.1 and 91.2

92. Enable the “brush” tool (b) and select the “layer mask thumbnail” to begin brushing around the relevant areas of the document (i.e. TV screen and wall pattern). One may also play with the brush opacity values for specific effects. To edit any of the previous adjustment layers simply click on its icon. See fig. 92.0 and 92.1 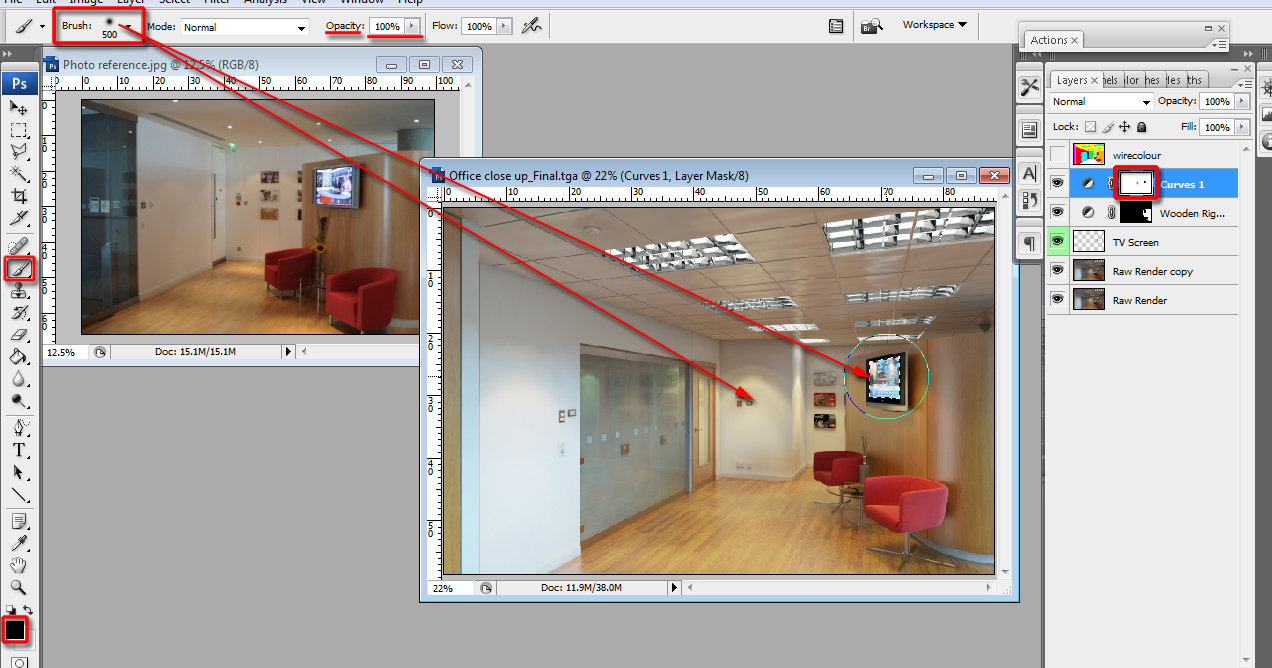 93. To edit any of the previous adjustment layers simply click on its icon. See fig. 93.0

94. Next, we are going to adjust the blue glass door.

B- While the selection is still on, add the “levels” adjustment layer to match its color and appearance closer to the photo reference.

C- Start by moving its “rgb” channel points to the right, to darken it slightly.

D- Also, change its channel to “blue” and move its input mid-level point to the left. This should intensify the blue tone. “Ok” to close the dialog. See fig.94.0 and 94.1 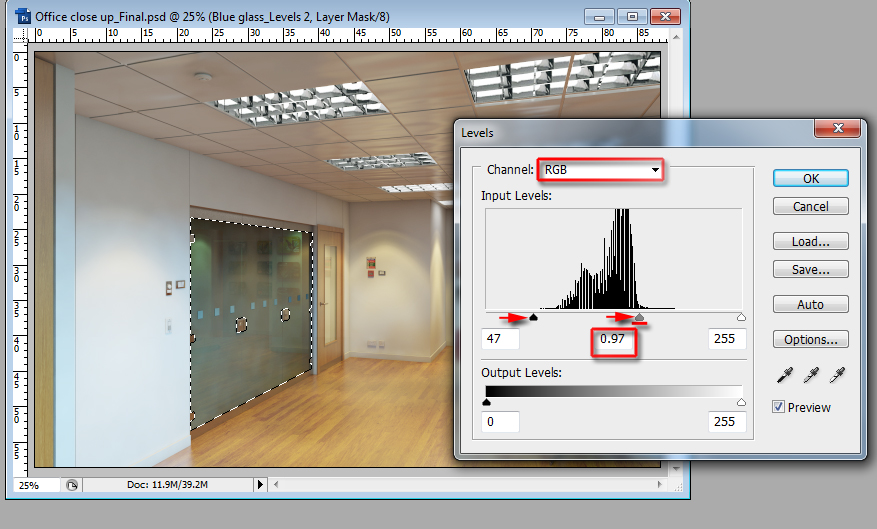 95. Name this new “levels” adjustment layer as “blue glass_levels” and change its property “color” to blue and ensure that its position is under the “curves 1” layer. This is to prevent the blue glass from becoming overly bright.

Note how the how blue tones of the rendered glass doors are almost identical to the photo reference. See fig. 95.0 and 95.1

96. Next, we are going to save the blue glass door selection.

A- While the “blue glass_levels” adjustment layer is still selected, hold down the “ctrl” key and left click on its “mask thumbnail” to enable its selection.

B- The selection should appear on the document. To save it, click on the “select” tool from the main tool bar and choose the “save selection” option from the dropdown list.
Name this selection as “blue door”. This selection is now saved in the channels’ tab.

97. Next, we are going to add an extra tone of blue to the blue glass door.

A- To load up its selection/channel, simply go to the “channels” tab, select the relevant layer, hold down the “ctrl” key and left click on its “mask thumbnail”. Select on the “rgb” channel and go back to the “layers” tab.

Alternatively, simply click on the “select” tool and choose the “load selection” option from the dropdown list.

B- Choose the pre-saved “blue door” channel from the “load selection” dialog. This unique tool allows users to load channels from different documents. Furthermore, if a selection was already “on” prior to choosing this tool, the dialog would have also given you the choice to “add selection”, “subtract, from selection” or “intersect with selection”. See fig.97.0 and 97.1

98. While the selection is still on in the document, add the “color balance” adjustment layer and play around with its value to achieve a more accentuated blue tone.

Once satisfied, name this new adjustment layer as “blue glass_color balance 1” and change its “color” to blue. 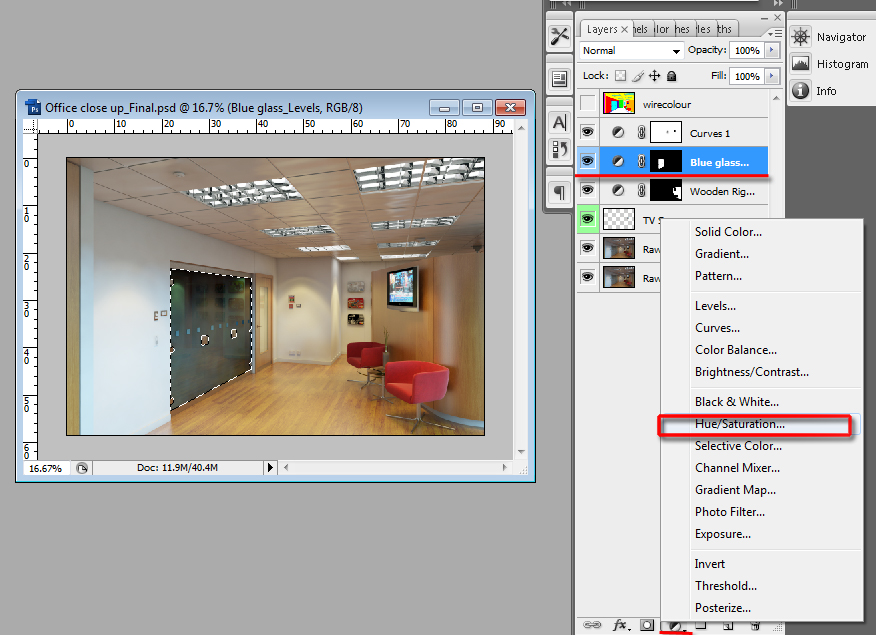 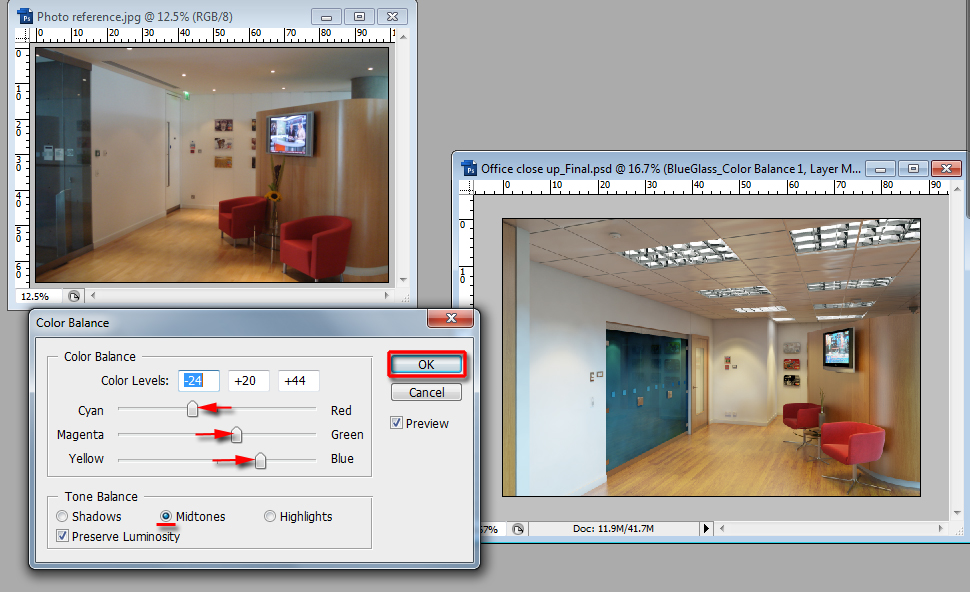 99. Next, we are going to darken the color of the metal pieces of the blue door to match it closer to the photo reference.

Select the relevant areas of the document using the techniques covered earlier and add the “levels” adjustment layer to darken the metal slightly. Use some of the approaches discussed earlier to achieve the correct tone.

100. At times, professionals add real photos of objects to the rendered document in order to make the 3d image more believable.

For this scene, it was decided that a real photo of a sunflower would help improve the rendered image.

A- Select the “photo reference” document.

B- Enable the “polygonal lasso tool” (L) and begin drawing around the sunflower edges.

D- Select the “office close up_final” document and past it (ctrl+v).

E- Once this new layer is created, move it beneath the “curves 1” adjustment layer. Name it “flower” and change its color to yellow.

To scale proportionally the transform marquee, simply hold down the “shift” key and start pulling its corner handles. See fig.100.0 and 100.1

101. In order to make the “flower” layer fit more naturally in the document, we are going to omit and feather certain parts of the document.

A- While the “flower” layer is still selected, create a layer mask thumbnail by clicking on its icon.

C- Ensure to have the “set foreground color” as black (to omit) and white (to add). To switch between the colors simply press the “x” key.

A- Add a new “hue/saturation” adjustment layer above the “curves 1” layer to affect the entire image.

B- To tone down the overall color to match the photo reference, we are going to reduce the “master” saturation value to about -22. The image is now looking much better.

C- However, the red and blue tones seem to have been lost slightly.

To boost these colors, we are going to first edit the “reds” and increase its saturation value to about +17. The image is looking much better now. You may try different values if desired.

Stay tuned for the final part! 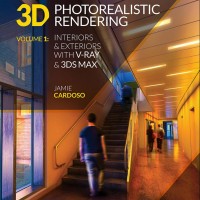 Jamie Cardoso
Jamie is a senior computer Artist/Technologist/Author/Reviewer, whose first-rate experience was gained designing and producing work for a wide range of clients worldwide. Much of Jamie's work and contributions had been featured in books; and magazines such as 3D World Magazine, CG Society and 3D Total, to name but a few. He is also the co-author of two successful books entitled: Realistic Architectural Visualization with 3Ds Max and mental ray. Most recently Jamie also published a new book manual entitled: 3D Realism Practical & Easy Workflows. He regularly shares his expert knowledge with users by constantly updating his blog. jamiecardoso-mentalray.blogspot.com Google: jamie cardoso
Weekly email summary