Working in a Collaborative Group Environment

As a professional designer for five years, I have learned a few things about the industry, but none are as important as the following: Understanding how to work within collaborative groups is absolutely essential to creating great work, and advancing your career. Group dynamics obviously depend on the type of place you work at. I have now tried both sides of the spectrum (in-house and agency) and while they are totally different, the concept of working within groups is still relevant. Today, I will be sharing a collaborative project that we have recently completed at my current place of employment, Huffy Bicycles.

Having previously worked at the world’s largest branding agency, a group project at an in-house corporation is a completely different animal than I was previously exposed to at the agency. I will not go into the differences between in-house and agency settings, but if you are an in-house designer I highly recommend visiting the AIGA In-house website for some good reading.

On a side note, John Lasseter has some great tips for creative’s to review.

In an effort to step-up the quality on our adult product, we decided the obvious thing we can improve on is one of the major consumer touch points, the grips. Our adult bicycle line is segmented into three categories: Mountain, Comfort, and Cruisers. We decided that we would end up with 2-3 solutions for each category. We had one lead designer on this project, with four other designers jumping in at various stages.

Research – To get to where you are going, you have to know where you have been and how others got there

As a team, we decided to take a trip to retail and visit some of the stores our (and our competitor’s) product is sold at. We visited all of the major retail stores and as a team, we discussed areas of opportunity. We considered variables such as Shape, Size, Texture, Pattern, Material and Branding.

It really is an eye-opening experience to walk around with a specific aspect in mind (such as grips) and just take a look at what is out there in the marketplace. How important are the grips to a bicycle? Watch your average consumer walk up to a bicycle rack and pull a bike out. Their hands immediately get a feel for the bike by gripping the bars.

Sketching – Get to the point you think you are done, then keep going

The first stage was just getting ideas out on paper. At this point it isn’t about who can sketch the best, but rather getting your concept down on paper. Sketches should be as detailed as they are needed to be, based on the audience. Since this was an internal design project, the sketches didn’t need to be as refined. Creatives naturally understand things more visually than non-creatives, and can visualize the final product better.

After we put all the sketches on the wall, we talked about what was working, and what else we needed to add to fill gaps. We also noticed some themes or ideas that several of the designers were hitting on in slightly different forms, so we started to bucket these themes together as single ideas. Below you will see just a small sample of the sketches.

Refining – The power of the dots

At this point we decided to mix it up a bit. After our critique, we decided that we needed to narrow down, and refine the concepts. We then started to pick other designer’s sketches off the wall and improve on them. This accomplished two things: one, it allowed us to incorporate the group feedback in to a better, more well thought out design. And two, this turned these concepts even more from a my idea feeling into an our idea feel.

After we had completed the refining process, it was time to narrow down to the concepts that we felt as a team would best accomplish the goals and objectives we had from the beginning. We had each designer mark their four favorite sketches with a dot, and the nine concepts with the most dots move forward. The whole group had spoken – democracy at work.

Below you can see three buckets we had for our Mountain Bikes. 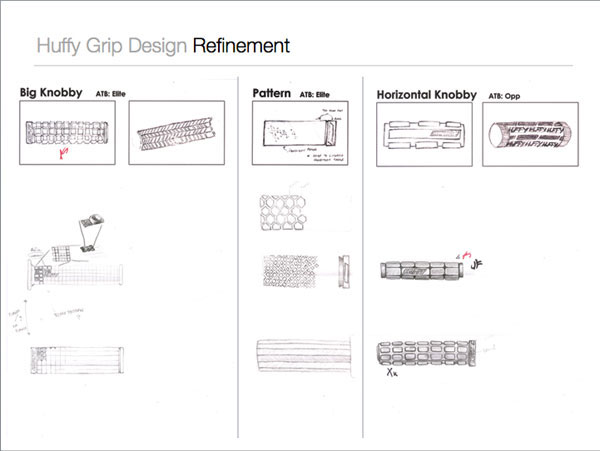 Execution – It is all about the details

For the next step in this process, we had to create 2D artwork that we could pass on to our CAD artists. At this point, most of the concept work was done, so the lead designer took over on this portion of the project. This is fairly straight forward, but the devil is in the details.

After we received the CAD drawings back from the 3D artist, again we got together as a group and gave feedback. Every step of this project has been about the team, and this was no exception. 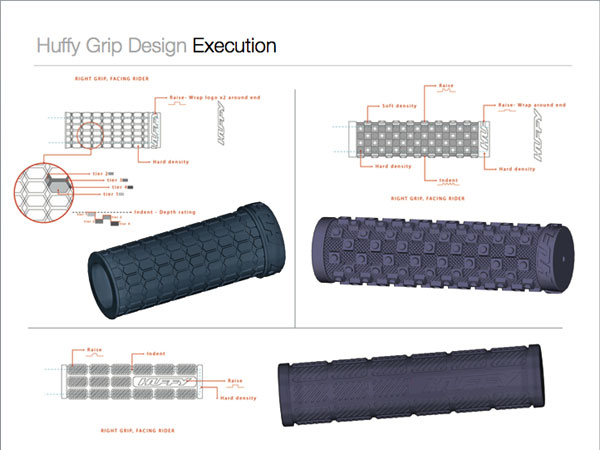 At this point the creative work was done, and it was now just a waiting game to get in actual samples. When they finally arrived, it was a great site to see the whole team crowded around a table looking at all the new grips that we had created as a team. Below you can see some images of our final production grips.

Working in groups can be very stressful at times, and there will always be time and budget issues when you start making the groups larger, but working in groups produces better work. Learning how to manage those groups, and the timing and budget issues that come with group projects is a great way to start to get management experience, especially for young designers who are still a few years out of college. I really hope you enjoyed this real-world example of a creative collaboration project at Huffy. 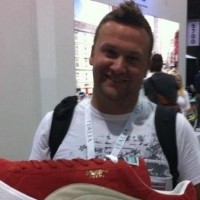 Tim Kyde
Tim Kyde is from Cincinnati, OH USA and has been a professional Graphic Designer for 4+ years, working at one of the worlds largest branding firms, and now in-house at a bicycle company.
Weekly email summary