Exactly two years ago, I created this post about AE terminology and thought that it might be helpful to re-post for those who are new to our reader-base. Are there any terms or concepts in After Effects that confuse you or that you often mix up? Leave a comment or for more of a discussion, head over to the Aetuts+ Facebook Page.

AE Vernacular That Often Gets Mixed Up:

Some of you may look at this list and say, "Who could confuse a Plug-in with an Expression?" Valid question, but don't be a jerk... at one point you didn't know either. Go read something else.


A Script is a series of commands that tells an application to perform a series of operations. To run a script that has not been loaded, choose File > Scripts > Run Script File, locate and select a script, and click Open. Run the sample script "Demo Palette.jsx" to get an idea of what sorts of things you can do with scripts.


We have a round of Scripts
here. These are some of the best from AE Scripts. 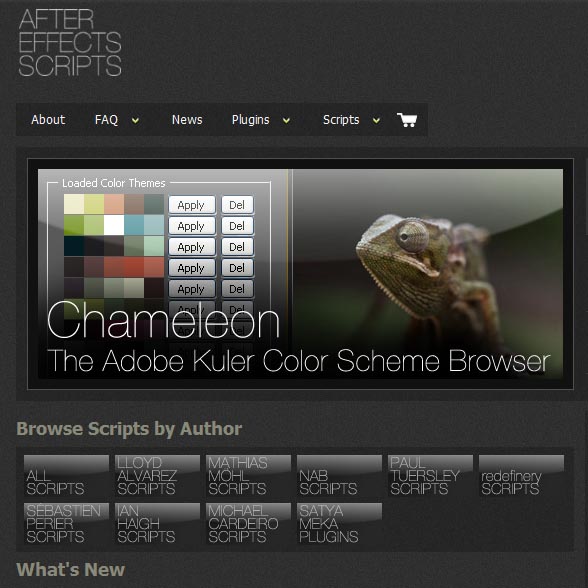 One key thing to remember is that a script is almost like it's own little executable program within the program. It only affects what you're working on when you run it through it's commands and then it is done until you run it again. 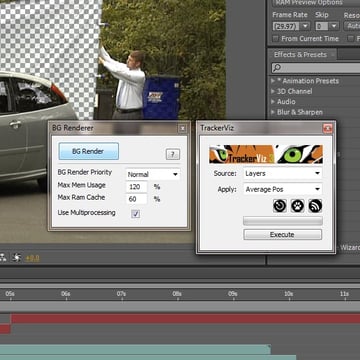 If you're interested in writing your own scripts, Dan Ebberts has a site that will walk you through the basics here.


An Expression is a little piece of software—much like a script—that evaluates to a single value for a single layer property at a specific point in time. Whereas scripts tell an application to do something, an expression says that a property is something. After you add an expression to a property, you can continue to add or edit keyframes for the property. An expression can take the value of a property as determined by its keyframes and use that as input to generate new, modified values.


Other then mask parameters, any parameter that has a stopwatch next to it can be assigned expressions. 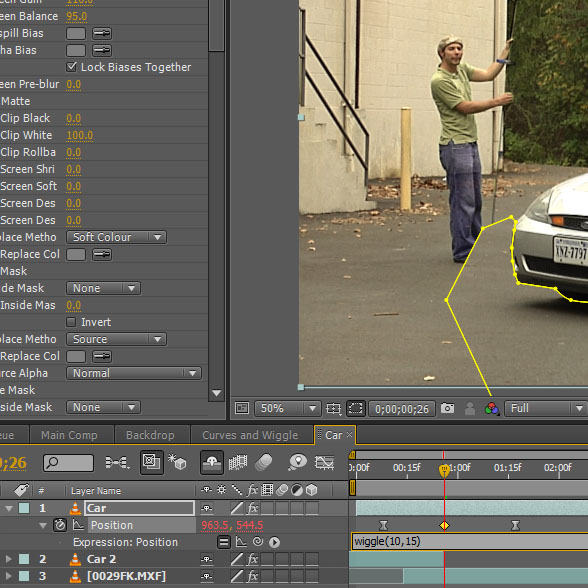 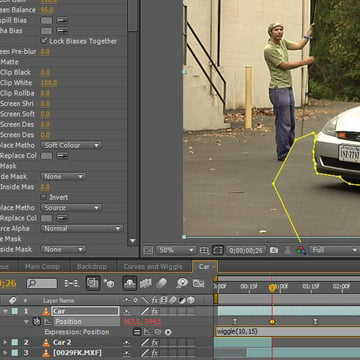 There is a lot training on expressions out there, but Harry Frank created a simple blogger site that very clearly explains the basics and it's been the most easy to follow, free walk through that I've come across. Check it out.


Plug-ins are small software modules—with filename extensions such as .aex, .pbk, .pbg, and .8bi—that add functionality to an application. After Effects "effects" are implemented as plug-ins. Not all plug-ins are effect plug-ins; for example, some plug-ins provide features for importing and working with certain file formats.


So when we apply something as simple as a Gaussian Blur, we are actually applying the Gaussian Blur Plug-in.

For a list of practically every plug-in on the market today you can check out the Toolfarm's list here. 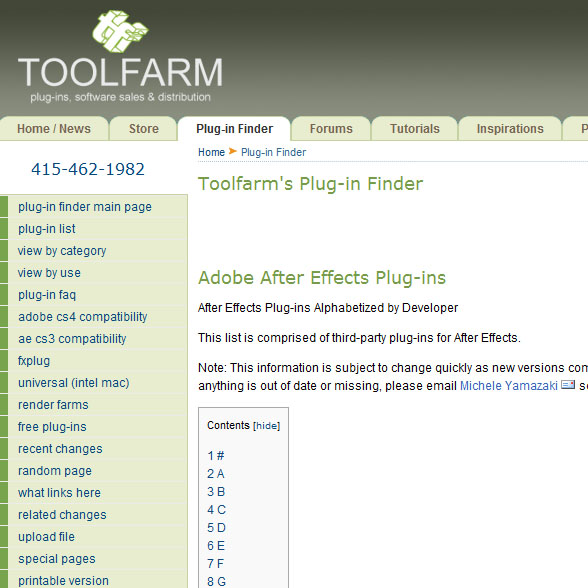 This is one that can get confusing because we use this same word for lots of different things. We talk about the "Matrix Bullet Time" Effect, a "Day for Night" Effect, a "Slow Motion" Effect.... Generally speaking it is used to describe a generated result. But what is the true meaning of the term in relationship to AE?


After Effects includes a variety of Effects, which you apply to layers to add or modify characteristics of still images, video, and audio. For example, an effect can alter the exposure or color of an image, add new visual elements, manipulate sound, distort images, remove grain, enhance lighting, or create a transition. You can apply multiple instances of the same effect to a layer, rename each instance, and set the properties for each instance separately.


So from what we read earlier, all effects are plug-ins, specifically "effect plug-ins".


Effects are sometimes mistakenly referred to as Filters. The primary difference between a filter and an effect is that a filter permanently modifies an image or other characteristic of a layer, whereas an effect and its properties can be changed or removed at any time. In other words, filters operate destructively, and effects operate non-destructively. After Effects uses effects exclusively, so changes are non-destructive. A direct result of the ability to change the properties of effects is that the properties can be changed over time, or animated.


I feel the reason we would make this mistake is because most of us working in AE are also familiar with Photoshop where we apply "Filters".


Most plug-ins will come with a number of their own presets. Additionally, there are many places online to find user-created presets for the plug-ins already included with After Effects. Andrew Kramer has a number of presets that you can download for free here. 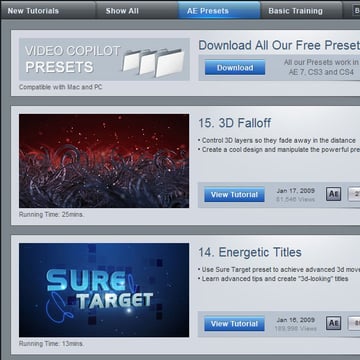 A CustomEffect is a special kind of preset that looks and behaves like a plug-in. It allows you to save a special collection of multiple plug-ins and key frames into one package that you can reuse without having the clutter of seeing each plug-in individually. 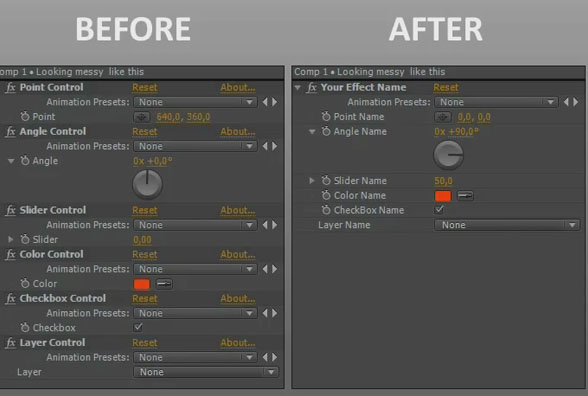 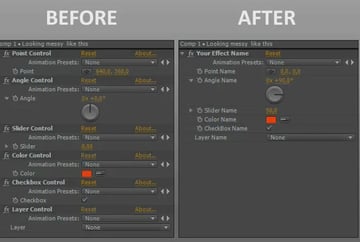 Maltaannon is the big name when it comes to CustomEffects. He has a number of them that you can download from his site along with a video explaining them in his own words. 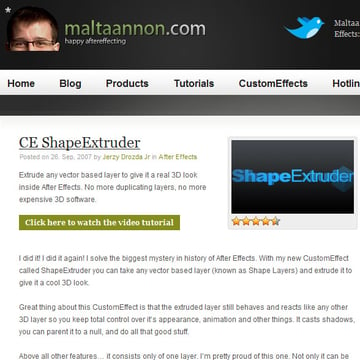 Another place to to find some CustomEffects is over at Alex Czetwertynski's site AEnhancers.com where Jorrit Schulte has provided some available for free. 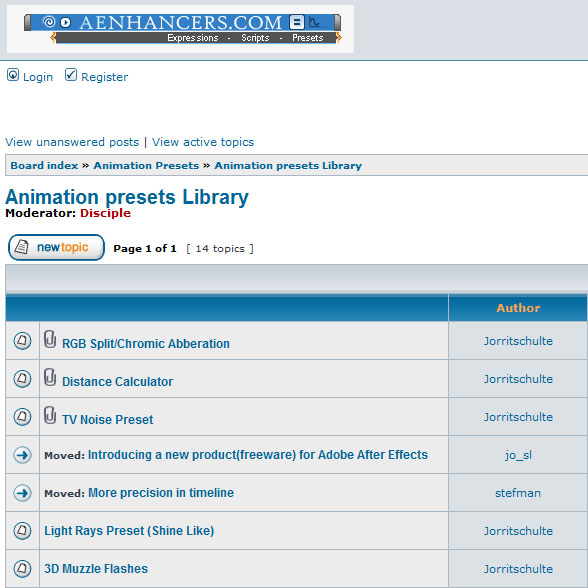 I'm just curious how often you guys use these aids (specifically expressions, scripts, presets, and CE's)? I talk to a lot of people who know stuff exists to help them, but never end up getting around to using it. Let us know what's been helpful for you.

RoundupsAdobe After Effects
Did you find this post useful?
Yes No
Would you like to provide feedback (optional)?
Cancel Submit
Want a weekly email summary?
Subscribe below and we’ll send you a weekly email summary of all new 3D & Motion Graphics tutorials. Never miss out on learning about the next big thing.
Sign up

Adam Everett Miller
Former editor of Aetuts+ from 2009-14, I currently run Hello Studios and still love creating fun stuff in After Effects.
Looking for something to help kick start your next project?
Envato Market has a range of items for sale to help get you started.