With high-end color correction tools reaching the mass market, and free tools more powerful than ever, here's a linkfest outlining books, websites, plug-ins, and tutorials for color correction in After Effects and beyond.

Scott Simmons has a book review at PVC of Alexis Van Hurkman’s Color Correction Handbook, which he says "is a MUST read for those interested in color grading and a SHOULD read for everyone else."

The Art and Technique of Digital Color Correction

by Steve Hullfish is an expanded version of a Hullfish book reviewed at AEtuts that offers deep analysis with professional colorists.

For more on these authors, see the Colorist Interview Series: Hullfish & Van Hurkman on The Tao of Color, and their respective websites (links are on their names).

CML, the Cinematography Mail List, is active and unwieldy but they've rounded up useful e-mails on some general techniques

The Tao of Color Grading by Patrick Inhofer started a Colorist Interview Series, complete with discussion outlines and resource links. You'll also find notes on working with DaVinci, Apple Color, Magic Bullet Looks, etc. on the website and extras in the newsletter. The newletter is quite good if you want to follow action in the world of color correction.

Tao of Color Grading also has methodical training for users at all levels, Master The Power of Color Grading: Online Hands-On Color Correction Training using a 14-Minute Short Film. The training has modules for both Final Cut and Colorista II, with project files also available for Premiere and After Effects. There's also an hour-and-a-half video of grading fundamentals and a private forum for feedback.

Also covering this area in depth is Walter Biscardi and The Editblog.

All the people in this section compare tools on a regular basis, so look to them for coverage of high-end tools reaching the mass market, with Filmlight Baselight a FCP plug-in and DaVinci Resolve (+ DaVinci Resolve Lite for free) and Assimilate Scratch on the Mac now.

For an in-depth introduction to controlling color in AE with the standard Adobe tools, see Adobe After Effects CS5 Visual Effects and Compositing Studio Techniques by Mark Christiansen (review on Aetuts+). It's really the best place to learn how to use these tools in AE, and builds the foundations for mastering procedural mattes for compositing.

If you need a free option, happily there's videos at Lynda.com from Photoshop CS4 One-on-One: Advanced by Deke McClelland, with a whole section that covers the basics of Level, Curves, and related effects in detail. See also the free infographics Levels Quick Reference Guide (thanks for the picture) and Curves Quick Reference Guide by John Dickinson, as well as some useful tutorials at Cambridge in Colour.

DV Rebel Tools from Stu Maschwitz are also free. It's an AE script palette that includes the DV Rebel CC preset. Older versions of that preset are around for users of older versions of AE.

Cross-processing look in After Effects

Tutorials on Color Finesse, a plug-in that ships free with After Effects

Andrew Devis has series of newer tutorials on color in After Effects and Premiere. Here are the ones for AE that use the Color Finesse plug-in, which ships free with After Effects...

By the way, there are 2 other 3rd party plug-ins that provide easier levels and color monitoring in AE (not in a modal dialog box): Synthetic Aperture Test Gear and Metadma ScopoGigio. An interesting free Pixel Bender filter was posted on Video Copilot last year, Waveform Monitor by Peter Werner, shown below. 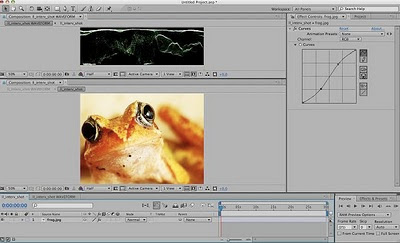 NewsAdobe After Effects
Did you find this post useful?
Yes No
Would you like to provide feedback (optional)?
Cancel Submit
Want a weekly email summary?
Subscribe below and we’ll send you a weekly email summary of all new 3D & Motion Graphics tutorials. Never miss out on learning about the next big thing.
Sign up

Rich Young
Rich Young is a long-time After Effects user from the San Francisco Bay Area who tracks AE news at AE Portal.
Looking for something to help kick start your next project?
Envato Market has a range of items for sale to help get you started.