Interview With Matthias Müller About His Work With Particles

Matthias Müller is renown for his impressive particle effects work both in the online world and in the visual effects industry. I recently had the privilege of asking Matthias a bit about his work and what inspires him to consistently create outstanding visual effects for his personal projects as well as some of the biggest companies in the world.

A breakdown of Matthias' recent work for Intel.

QFor those who don't know, could you explain a little about what your job title is and what you do?

Sure, I work as a VFX artist. That means I create all kinds of visual effects for video productions, mostly for tv commercials or live events.

QHow did you get started in particle effects and when did you decide to specialise in particles?

I think I started working with particle flow (3ds Max standard particle system) around 3 years ago and I really loved it. I think it's really flexible and you can do all kinds of cool effects with it, especially with its extensions Box #2 and Box #3.

Soon after I started working with particles I found out about a tool for 3ds Max called Krakatoa which makes it possible to render insane amounts of particles very quickly and beautifully. I posted my first particle tests using this tool on Youtube:

One of the developers of this tool, Borislav Petrov, saw my test videos and invited me to join the Beta for their next release of Krakatoa. That was really cool. Since then I kept working with particle flow and Krakatoa a lot.

QWere you self taught or trained by someone?

I am mostly self taught. When I started working with 3ds Max I read a lot of articles and basic tutorials but then I went on on my own. To get into FumeFX and particle flow I watched some tutorials from Allan McKay.

I think he is really good at teaching this stuff, but I also think particle flow is quite self explanatory and easy to understand, you just need a decent background in maths. My two major subjects in school were maths and art (which is of course helpful too).

There are a lot of incredible CG artists out there who inspire me. One in particular is a German artist named Tim Borgmann, I really love his abstract artwork. One year ago I was collaborating with other CG artists on a project called Resonance.

All the artists who contributed to this are amazing and inspiring too! I also love watching sculptors create the most real looking and detailed creatures in zbrush, for me that is inspiring too.

QWhat project or job have you had the most fun working on?

Hmmm... that's hard to say. I love my job in general, but working on my own projects like Entering the Stronghold or The Space We Live In is what i like doing most.

The Space We Live In from Matthias Müller on Vimeo.

That really depends on the project but also I'm not sure how I would categorize most of my own videos. I don't think about this classifications a lot, I can just say that I like creating energetic and colorful effects most.

QHave you used the particle effects in after effects, and if so what's your opinion on them?

QHow do you deal with the massive simulation and render times for particles?

One thing I love about Krakatoa as a render engine is the speed, it renders very fast in my opinion. When I do heavier simulations and renders I just run them overnight. I also really like V-Ray for rendering since the results are great. The render times can get quite annoying so I just have to be patient then or try a different setup, I don't have a render farm yet.

QWhat's your single favorite piece of particle work you've seen in a film or movie?

I don't have one specific scene in mind but in general I admire all the awesome visual effects from the Marvel movies like Thor, The Avengers and of course Transformers 1-3. All the effects in these movies are so incredible, I really look up to the guys creating them.

QWhich industry professionals do you admire most?

Alex Roman, Brandon Riza, Miguel Salek, Onur Senturk, Tim Borgmann, the guys from Polynoid, there are a lot of outstanding artists out there, I can't name them all.

QWhere do you hope to be in 10 years time?

Ouch, 10 years is such a long time. I just want to stay healthy and do creative things. I want to do more audio visual animations in the future and also integration with real footage. I just bought a camera :)

Recently I started creating abstract paintings. I want to keep this up and improve too :)

QIf you weren't creating particle effects as a career, what would you be doing?

I have no idea, art + math mix is perfect for me.

QWhat advice would you have for someone wanting to create better particle effects?

Definitely try to learn as much as you can about the artistic side; how color, light and shape work together to make up a composition, not just about how to approach things technically. A lot of people asking me for tutorials don't seem to have the artistic side in mind.

QWhat's your opinion on chromatic abberation?

QWhat programs or plugins have you really wanted to learn that you just haven't had time to get around to?

I would like to get more into fluid simulation tools like Realflow or Naiad, I hope I can find some more time/motivation in the future to do so. 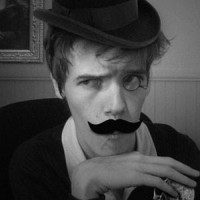