The Unreal 3 Editor is a powerful game development tool that ships free with most Unreal 3 games (Unreal Tournament, Gears of War, Roboblitz). It's quickly becoming a standard tool in the game development industry and is known for putting a lot of power directly in the artist's hands, particularly through it's node-based material editor.

This tutorial offers an introduction to Unreal's material editor and assumes no prior knowledge of the tool, or the presence of any other tools but the editor itself. Through the creation of a 'flickering monitor' material (or “shader”), this tutorial will demonstrate some of the powerful things that are capable with the material editor.

This tutorial was created using the version of the Unreal Editor that shipped with Unreal Tournament 3, but is likely to work with other versions of the editor.

First you need to get the files we'll be using to create our shader. You can retrieve them using the download link below. You will need both the Text.tga and the Panner.tga files, as we're going to use these to create an old fashioned 'computer screen' shader (complete with pulsing and a blinking red warning). 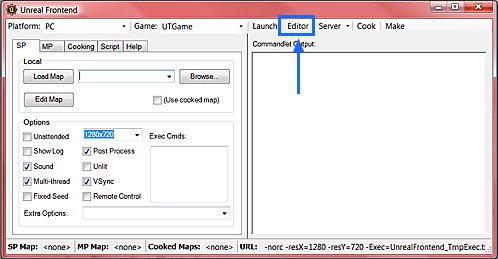 In the 'Generic Browser', click "File>Import". Navigate to where you saved the source images from Step 1 and select Text.tga. After a moment an Import options dialog will appear. All of the defaults are fine except one; where the dialog asks for the name of a 'Package', type 'Monitor". Do these same steps for Panner.tga as well. Unreal organizes assets into 'Packages', and now both our source images should be imported into a package called 'Monitor' (see second image). 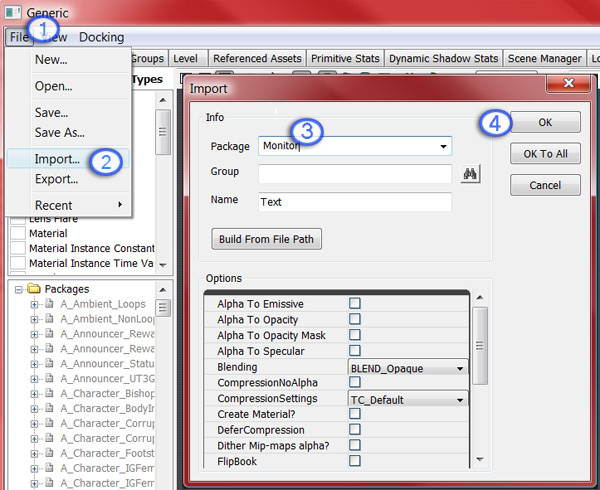 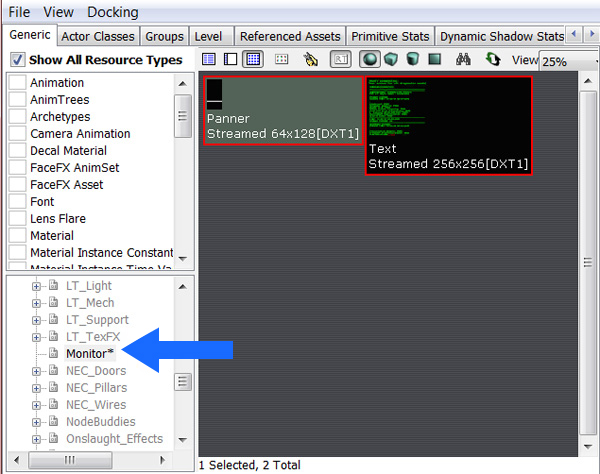 Now that we have our source images imported, we can set up our shader. To do this "Right Click" on the grey background of the 'Generic Browser' and choose 'New Material'. In the next dialog give the material a name like 'Screen'. When you click ok, the 'Material Editor' will open up.

Now is where things get fun! There are four major areas in the 'Material Editor': The big area of grey in the center is the workspace, and it contains inputs into the major channels of the shader, the dark area to the left is a 3d preview of the material, the space along the bottom of the screen are the material options, and the column along the right side is a list of all the material expressions (nodes) you can use to build your material.

Move the 'Material Editor' out of the way for a moment, so you can see the 'Generic Browser' again. Click on the 'Text' source image we imported earlier to select it. Immediately return to the 'Material Editor', and select the texture sample node. Under the options there should be a line that says “Texture: None”. Click the green arrow, on the right side of that line, to link the selection from the 'Generic Browser' with the 'Texture Sample'.

Add another 'Texture Sample' node, and link that one to the “Panner” source image, the same way you linked the 'Text' image. We're not going to use this quite yet, but we will eventually. You should have something like the image below.

Although we've placed our source images into the workspace, we have yet to 'wire' them into the material's inputs. Click and drag on the BLACK square to the left of the named 'Text' Texture Sample. This is an 'output'. Outputs are always on the left of a node. A wire should appear, following your cursor as you drag. Let go of the cursor on the shader's “Emissive” input channel. 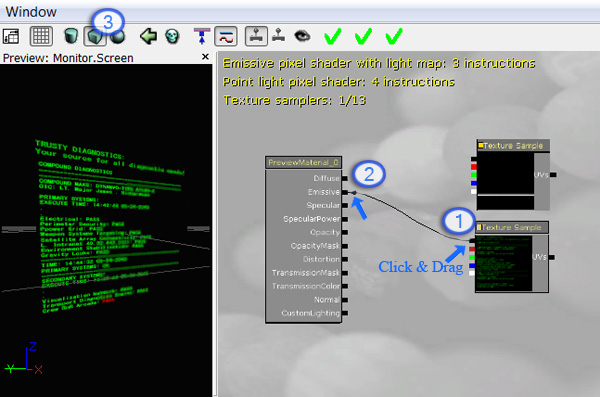 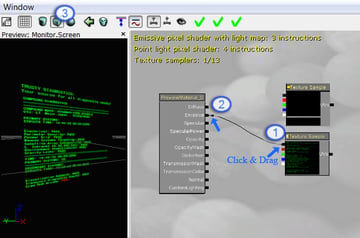 Click the first of the three check marks. This applies your changes to the material. Congratulations, you've built a shader in Unreal! Unfortunately it's very boring, so the rest of this tutorial will be about spicing it up. Now is a good time to save your package back in the 'Generic Browser'.

For starters, let's assume that we're trying to create an older monitor screen—like something you'd see in a cold-war military base. Giving the screen some 'flickering' is a good way to introduce some life into the material. One of the easiest ways to do this is to quickly shift between two versions of our 'Text' image.

Right click on the BLACK output tab of the 'Text' Texture Sample, and choose 'Break Link'. From the 'Material Expression' list, click and drag one node of each of the following: Multiply, Constant, Linear Interpolation, Time, and Sine. Try and arrange them similar to the image below. 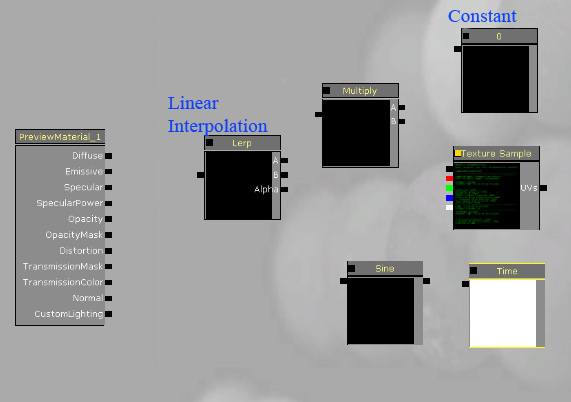 Now connect the 'Text' Texture Sample to one of the inputs of the multiply. Connect the 'Constant' node to the other input of the multiply. Remember, inputs are always on the right side of a node, and outputs are on the left. Unreal's 'Material Editor' always flows right to left. After you've connected the 'Constant' and the 'Text' texture sample, click on the 'Constant' node. In the options at the bottom of the editor you should see a type-in-box labeled 'R'. You can change the value of the constant there. Change it to '1.2'. This gives us a brighter version of our 'Text' image coming out of the multiply node.

The 'Linear Interpolate' node allows you to fade from one image to another, or in our case, between our original 'Text' image and our new brighter version of it. Hook up the nodes as shown in the image below.

The only thing we're missing now is an alpha to drive how the two versions of our 'Text' image mix. The 'alpha' input of the 'Linear Interpolate' node requires special care—not just anything can go into it. It's limited to a single 'channel' of information. We'll get into that more later.

'Sine' and 'Time' are a common node combination that give you a value that constantly oscillates between '0' and '1' (well, technically '-1', but that's not a big deal). It's important to note that Unreal will see a value of '0' as the color black. A value of '1' will be white. So set up the 'Sine' and 'Time' nodes like below, and then connect the 'Linear Interpolate' to the 'Emissive' input of the material, and you'll get a material that has a nice pulse to it. If the effect is not exaggerated enough for you, then you can crank the constant up to a higher number. Experiment to see what you get!

This effect is great for a pulsing screen, but to make it appear as though the screen is flickering, we need to ramp up the speed of the pulse. Click on the 'Sine' node and change it's 'Period' from '1.0' to '0.1'. Now it really should look like an old CRT monitor with a bad flicker.

To tidy things up a bit, hold "Alt+Control" and click in the top left, above all our nodes. Drag to the bottom right, and you'll create a selection box. When you let go, all the nodes you boxed in will be selected. Hit the 'c' key to create a comment box, and name the box 'Flickering'. Now when you click on the name 'Flickering' you'll be able to move the entire group (hold the control key and drag). Move the 'Flickering' group a little to the right to give yourself some more room. 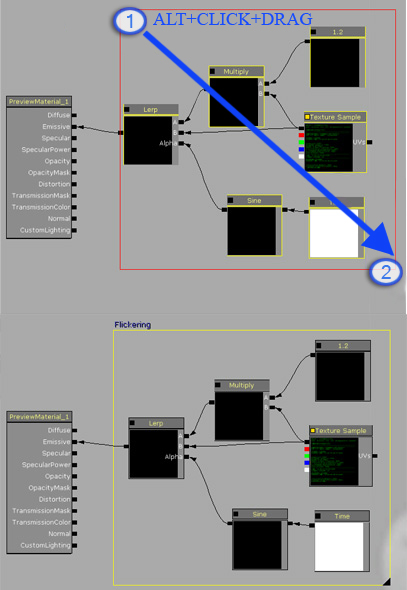 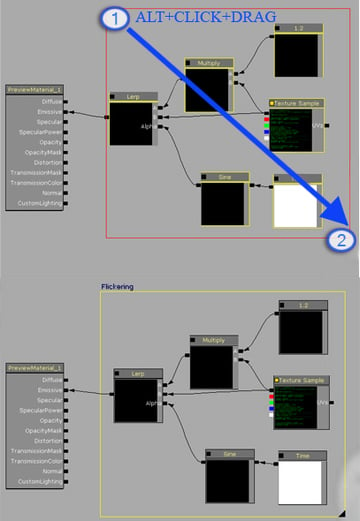 Now let's use the 'Panner' Texture Sample we added earlier to make our monitor shader look like it has a refresh/ scanline problem. Do do this, we'll make a horizontal bar scroll through the image.

Go to the 'Material Expressions' list and add a 'Panner' node. This node lets you scroll a texture sample node. Hook the 'Panner' node up with our 'Panner' Texture Sample, and then hook that up to the material's 'Emissive' input. By default the 'Panner' node has a speed of '0', so click on it and change it's 'Speed Y' to '-0.2'. The only problem with it now is that it's a white scroll, and we need to mix it into our green flickering. 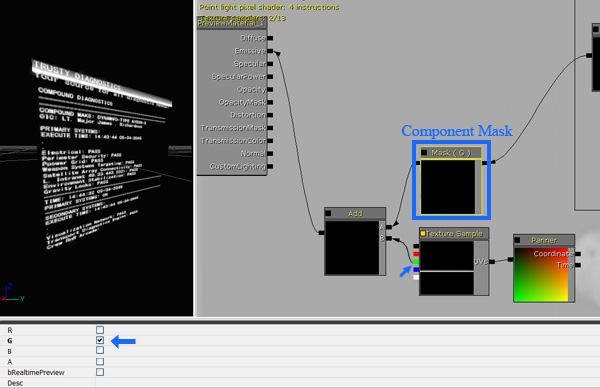 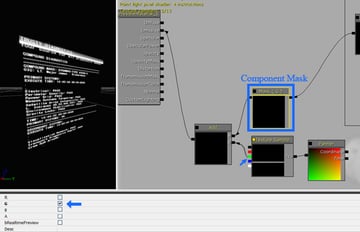 Now we have our two effects overlaid, but it's ALL white. That's ok. This is what our final 'Green' channel will look like. We'll recreate a full color result in the end.

Select the 'Component Mask', 'Sine', 'Add', 'Panner', and our 'Panner' Texture Sample nodes, and hit 'C'. Give their group the name 'Horizontal Bar' and then drag your two groups around to neaten them up a bit. 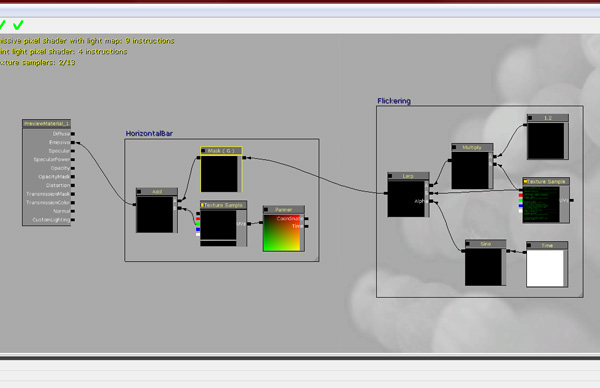 By now you should know almost enough to create the following image from scratch. It's very similar to the combination we used to create the flickering effect. You can right click on the earlier 'Text' Texture Sample, and choose 'Duplicate' to create a second copy to use here.

There are three major differences between this combination and the 'Flickering' set up.

If you look at material preview window, we have a grayscale version of the word 'Fail' pulsing. This is a black and white representation of whatever will be red in our final material. Group these nodes and call them 'PulsingRedFail' 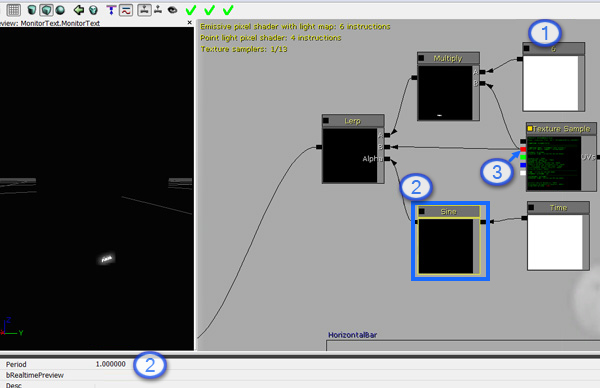 To combine all our work into a single full color result, use an 'Append' node from the 'Material Expression' list. This lets you recreate a multi-channel image out of separate 8 bit channels. You should have a nice 'early 1990's' looking green screen with a flashing red warning at the bottom.

If you see a teal screen, then check to make sure your 'Horizontal Bar' group is set up correctly (and you're only using the Green channel from the 'Panner' Texture Sample.

Here's the final material, and an how it looks applied to the model. 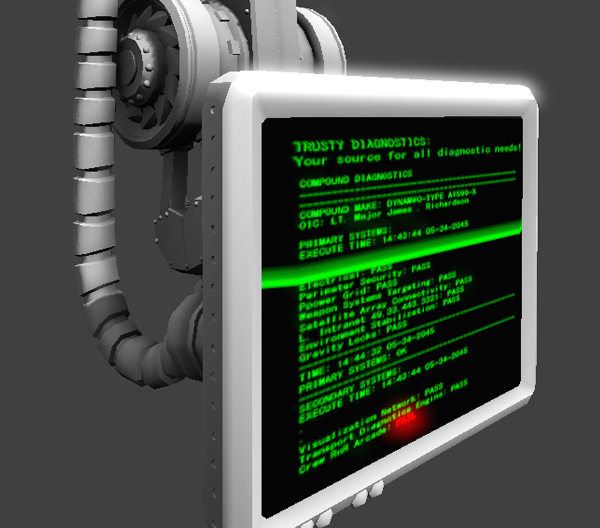 Now you should have a basic understanding of the Material Editor in Unreal, along with some experience with some of the most common nodes. There's a lot of amazing effects you can create with this tool, so have fun experimenting!

UDK3D
Did you find this post useful?
Yes No
Would you like to provide feedback (optional)?
Cancel Submit

Joe Mirabello
Joe Mirabello is currently a senior environment artist at 38 Studios. Over the past half decade Joe Mirabello has been able to wear many hats in the industry, focusing primarily as an environment artist, but also creating occasional character art, concept art, and helping out as a technical artist. He has contributed work to indie games, mass market novels, military/government contractors and Smithsonian documentaries. Throughout his career he has tried to give back as much as possible to the art community through lectures, tutorials, and helping moderate GameArtisans.org and the Dominance War, and Unearthly Challenge game art contests.
Weekly email summary

Update me weekly
Looking for something to help kick start your next project?
Envato Market has a range of items for sale to help get you started.