An Introduction To The RED Scarlet And Epic

In today's article we'll be talking about what you need for a basic RED setup, and how much it will cost.

RED digital cinema was founded by Jim Jannard (founder of the Oakley brand of optics). RED entered the cinema world with their first camera, The Red One, in 2007. The Red One brought something new to the video world, a digital camera that shot high resolution, high framerates and high quality for well under $100,000.

Since the Red One, RED has released two other cameras under the DSMC Digital Stills and Motion Camera construction philosophy. The RED Scarlet is the lower-priced, less-featured of the two, the RED Epic being geared more for the professional market. No matter the camera, both give you high quality video and high framerates at a price not seen before RED's debut. This article is designed to give you a basic outline of what you will need to shoot on a RED Camera, how much it will cost, and some examples of what you can do with RED footage in After Effects.

It all starts with the Brain

The DSMC philosophy entails a central “Brain” that houses the Camera’s sensor and other computer functions to capture and process the image. It attaches to accessories and modules purchased separately or as part of a kit. External storage, video monitors, lenses and rail systems are all available for the RED line of cameras. The RED Scarlet and Epic are currently the only cameras released built under this design. (Specs from RED's official website.) 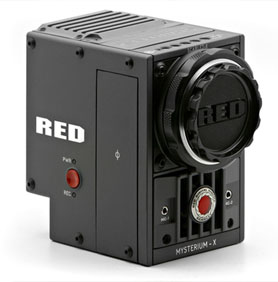 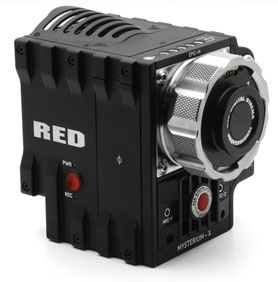 *HDRx is a High Dynamic Range image captured by combining underexposed and overexposed to create a single image containing a large amount of light information covering the darkest shadows and brightest highlights.

The equally important and second most expensive (usually) piece of your RED setup will be the lens. For the DSMC line of RED cameras there are mounts for Canon, Leica, and PL lenses. A great benefit of the DSMC module design is that these mounts and most accessories are cross-compatible between both the Epic and Scarlet cameras, so the mount that you use on one camera will be able to be used on another. 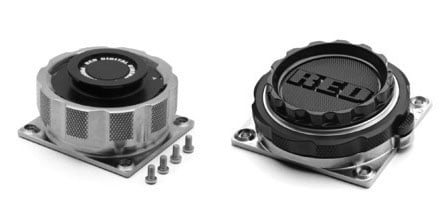 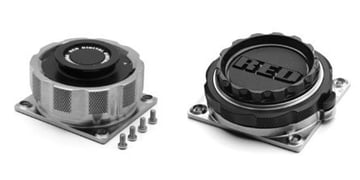 DSMC Mounts PL and Canon Titanium (also available in aluminum)
A list of mounts and pricing can be found at Red's store here.

Now you need a lens to which you can attach your camera. RED has their own series of PL-mount lenses available in two different sizes of zooms and four different prime sizes. They are available from $4,250.00 for the lowest-priced prime and up to $9,975.00 for their most expensive zoom (which would cover almost all necessary lens lengths). 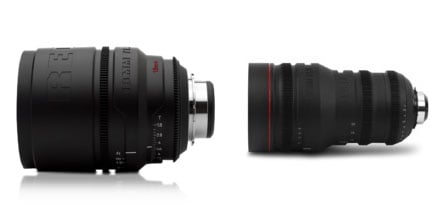 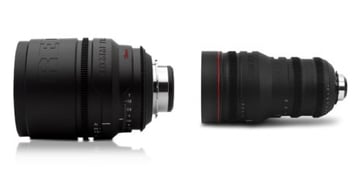 In addition to RED's line of lenses, you have a very large assortment of lenses with which to work because of the various lens mounts available. You may work with anything from high end Zeiss Ultra Primes and Cooke S4s to a standard EF-S lens by Canon. The amount of options at your disposal are massive!

Now in order to see the image that you will be recording, you will need a monitor on which to view it. RED has created their own monitors that connect to the camera via proprietary connection, but you can also use the HD-SDI connection to attach a third party monitor.
RED also has a type of viewfinder available, the Bomb EVF, which connects via the same proprietary connection. It comes in two versions, with a LCOS or OLED display.

To record audio both the RED Scarlet and Epic record up to two channels of RAW 24-bit 48khz audio. You can also purchase a PRO I/0 module which adds two XLR audio inputs and an extra RED Display output, in addition to an assortment of other connections, for $3,750.00.

Where to Store Your Information 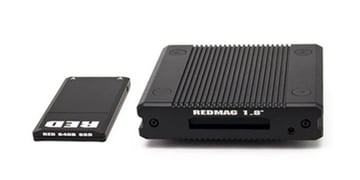 You need somewhere to store your image. The only way to do it with the DSMC system is by using RED PROMAG SSD drives. Not only do you need these drives that store the image information but an adaptor that connects them to the camera, which is either sold separately or as part of a kit with the camera, and then to edit your footage, a RED Station is necessary to be able to connect the PROMAG SSD Drives to your computer. Sounds complicated? Don't worry, a visual at the end of this article will visually sum up everything.

Controlling and Powering Your Camera

Now only two more things are still necessary for your RED configuration: some way of controlling your camera and a power supply.
There are a few different ways to control your RED Camera, the most simple is the DSMC Side Handle which connects directly to the side of your Epic or Scarlet Brain. This is extremely beneficial because it also allows a slot for RED’s REDVOLT batteries to power your camera instead of being limited to the onboard AC Adapter. You can also control your camera using a touchscreen monitor or REDMOTE (which wirelessly connects to your RED Scarlet or Epic).

So this is what our complete RED setup would look like: 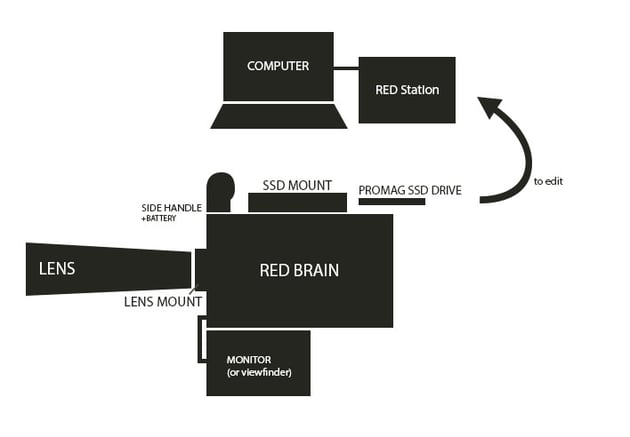 Now we can go film "The Hobbit"!

Using RED Footage in After Effects

The REDCODE codec in which RED’s cameras record are natively supported by After Effects and Premiere since CS4 (via plug-in). The highlight of working in REDCODE is the massive amount of data attained. If you know the difference in shooting stills in RAW and Jpeg you will notice the very similar experience when working with RED footage. REDCODE’s large amount of recorded information allows you to pull tons of detail out of the shadows and highlights in your footage.

I’ve borrowed some raw example footage from RED’s M-X reel at REDUSER.net for this example:

Note the information retained in the black background of the image. Yes, all of your footage behaves like this!

This is due to the amount of information retained in the capture of the image. A normal DSLR and most prosumer digital cameras are not able to record beyond 8 bit depths of color, whereas RED Cameras are capable of recording twelve to eighteen bits of color. (Find out more about bit-depth in another tuts+ article here.)

Because of this extra bit depth, make sure to change the bit depth of your After Effects project file by alt-clicking at the bottom of your project settings panel. 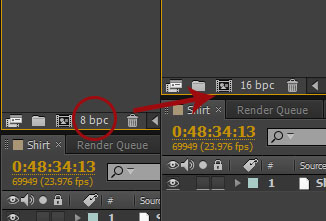 If you work with RED footage a lot, you may want to consider investing in a RED ROCKET, an additional piece of hardware that fits into the PCI-Express slot on your computer (same as a graphics card). It allows real-time playback of RED footage in supported applications. RED's CineX, After Effects and Premiere being part of those supported.

I hope this help shed some light on the RED camera system. There are many more accessories, modules and such things available at RED's store not able to be covered here. Make sure to check it out. For a basic camera setup like the one discussed here, check out one of the camera collections that RED has to offer.
You can view my sources here. Drop any questions in the comments! Thanks.

Brock Nordstrom
Brock (Brawk on MoGraph and among other places) is a freelancer currently working out of Las Vegas and Salt Lake City. When he's not doing motion graphics, he is usually involved in video and photography.
Weekly email summary