This is a brief introduction to some of the most unbelievable Visual Effects in Hollywood's biggest movies. This "Part 2" will describe the making of movies: King Kong, X-Men First Class and Pirates of the Caribbean.

For this movie, the VFX team of Weta Digital had to improve their working system with regards to hardware, networking and infrastructure. Now, they have a big philosophical change in their pipeline: so they are more geared toward pulling information together at render time rather than carrying it through individual scenes. This means that technical directors now use low resolution proxies rather than high detailed geometry whether they're looking for complex scenes or complex characters..

With a creature like Kong, you don't want to open a scene and have all of the fur in it, and you can't open up a scene with all of New York in it - Joe Letteri

The team had to create new tools that could satisfy their needs, so they created a new fur simulation software and new fur shaders to animate Kong's five million hairs when he moves, ruffle his hair on the plane's wing, manage the collision with other objects and allow it to become dirty. The crew also wrote a fluid dynamic's solver, which they use to create the ocean for Kong's voyage to New York.

You really need your own software so in the case of something not looking right, you are able to open it up and figure out what's going on - Joe Letteri 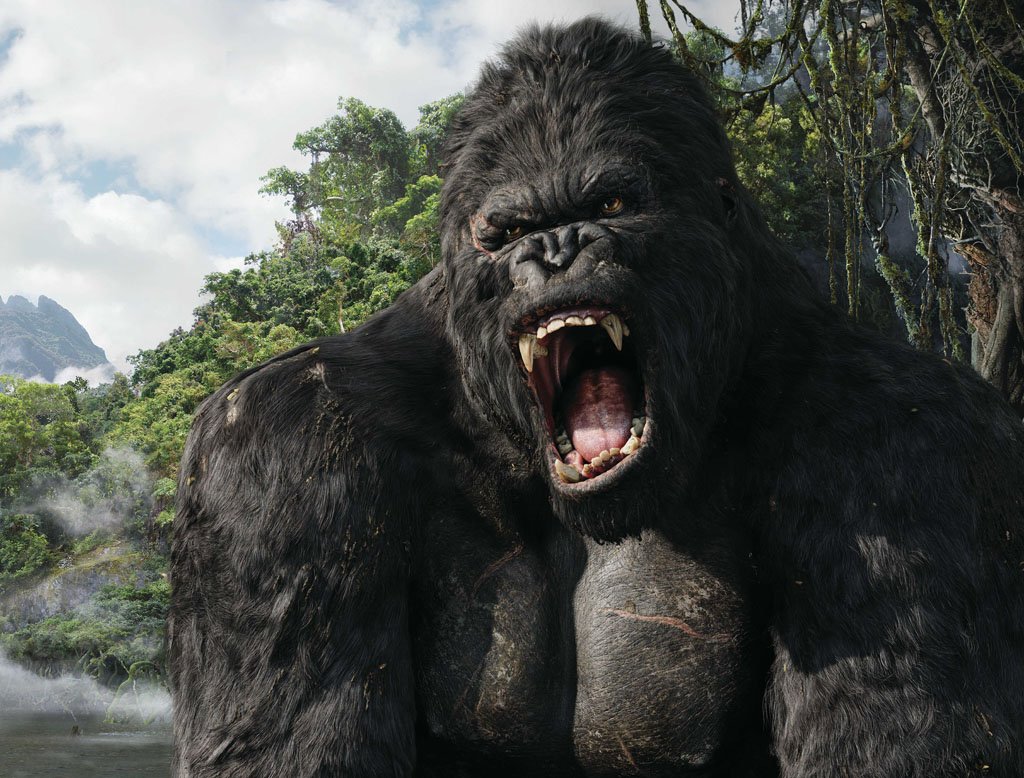 Of course, one of the biggest challenges in the film was the creation of its star. The modelers created him and the doubles which he interacts with in Maya with the help of Mudbox. To breathe life into Kong, rather than rely solely on keyframe animation for the CG gorilla, the crew motion captured the actor who gave life to Gollum in The Lord of the Rings, Andy Serkis. New software made it possible for animators to drive the CG gorilla with either the mocap data or key frame animation, and a new system interpreted Serkis's facial expressions before mapping data onto the 3D model.

The software looks at the dots on Andy's face, figures out what his expression says that he's sad, for example and then applies that to Kong. - Joe Letteri

Making of the Mutants Effects

The VFX team designed the way mutants exhibited their powers as if there were no film history to deal with. They began with a range of ideas for each mutant and started considering how they related to the mutants in previous films, both visually and in the X-Men comic world. Where there was a character that had already been seen before like Mystique, they tried to relate the effects to earlier visuals. Where there was a family tie in comic book genealogy they tried to relate their characters power to a family similarity, such as the fact that Havok is Cyclop's brother. In some cases the team didn't use any real visual reference so they simply chose the visual that they liked the best.

The team started by creating simple still illustrations of how Emma Frost's diamond body would look. The character went through multiple reviews until the team found a look that worked. They then translated those still images into an animation. To get the movement as precise as possible they rotoscoped, frame by frame, the actress's performance. Finally, VFX artists digitally removed her from the frame and put the animated one in her place. To really look like a diamond, Frost needed to sparkle, so they had a lot of work to make sure she refracted and reflected light correctly. They finally managed to get the right look by taking pictures of a faceted cubic zirconium and using them as a reference.

She had to be both crystal and fluid, because she had to move when she was in her diamond form - John Dykstra 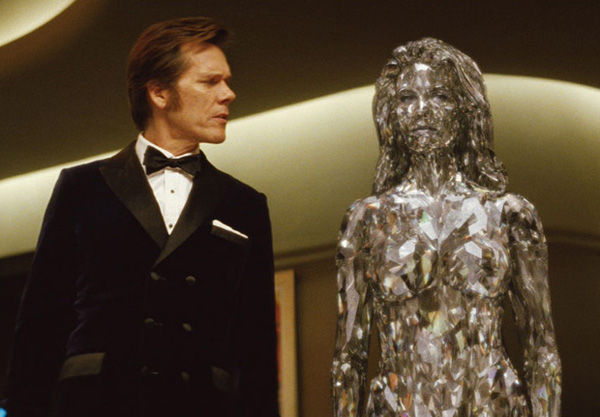 Azazel is a devilish-looking mutant who is able to transport between dimensions. For its making, the VFX team began with the development of the digital fire and smoke simulation that appears when he teleports. They roto-mated Azazel, so whatever movement he was doing at the time would then in turn affect the smoke simulation. Then, they also had to create the tail, which was built and animated in CG and some transparency and textures were added in for a real-world feel.

Creating Davy Jones and his Crew

Davy Jones and seventeen of his transmogrified crew were digital creations that had to match seamlessly with the real actors. The team used ZBrush for the creation of the 3D models for the characters. For the animation the team used motion capture but not in traditional methods; instead of recording performances in a mo-cap studio and then inserting the CGI character into a blank space on the plates post-production, they decided to shoot the actors and record their movement on the same plate, and then replace them digitally with the CGI character. The team used Pixar's RenderMan for the renders, but they were taking so long that they decided to discuss with Pixar how to implement a new technique inside their software. This way, renders that were taking twelve or thirteen hours went down by to just three or four hours and they started to produce the same or even better results in a quarter of the time. 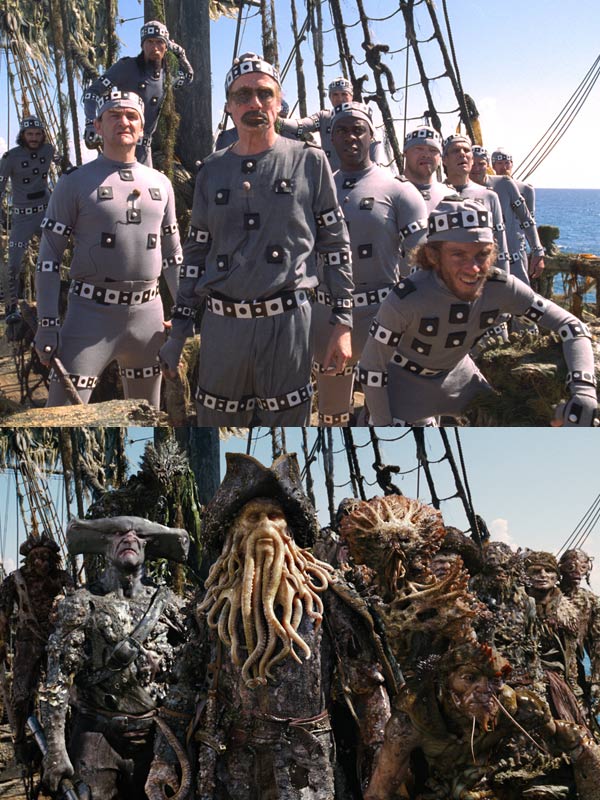 To create this scene, ILM hired Frank Lossaso-Petterson who helped to build the Stanford's fluid simulation engine, which is an hybrid of a PhysBAM engine and a Zeno interface. It's something like Maya except that it is more customizable. To create the Maelstrom the team used a technique which consists in simulating it as though it were flat and gravity pointing inward instead of sloping down, and then transforming the surface into the whirlpool shape. This scene required a lot of computational fluid dynamic, huge resolutions and computational power and memory.

This movie has more than 1000 VFX shots including waterfall sequences, icebergs, ship destruction, CG Creatures, and so on. Many of these shots have live action elements combined with CGI, except for the Maelstrom whirlpool which is a total 3D Environment. The ships were live action boats extended and sometimes full CG Ships so they had both live water action and CG water simulations. There is a scene where the ship is descending below the water; for this scene water passes were filmed and tracked and then were combined with CGI elements and the motion captured crew.

This video will show you the amazing VFX Scenes, how they create it and some scenes of compositing.

Daniel Reinoso
My name is Daniel Reinoso and I'm from Maracaibo, Venezuela. I'm 14 years old and After Effects, Photoshop and Premiere Pro have been hobbies of mine for a number of years now.
Weekly email summary