This is a brief introduction of some of the most unbelievable Visual Effects in Hollywood's biggest movies. This "Part 1" will describe the making of movies: 2012, Avatar, Alice in Wonderland and The Lord of the Rings.

The real stars in this movie are the Visual Effects, what 2012 has done has never been done before in terms of disaster films . This movie shows everything from the overthrow the Vatican and the White House being destroyed by a seaquake to a flood taking over the Himalaya.

Blowing Up Models Out

The development of computer hardware and software plays a huge role. The miniatures in this movie were so few that it only took about two days of shooting. The reason is because the CG models are cheaper than the miniatures, the second thing is the physical limitations. 2012 shows Los Angeles being destroyed by an 10.5 earthquake and there are a hundred houses in these shots. To do this with miniatures would be far more difficult and expensive.

Challenges in this movie

Many of the VFX scenes were left to their imagination. In the scene of the L.A. Earthquake, it was in the script as only four lines that said they drive through Los Angeles to Santa Monica's Airport while the city is being destroyed. This entire scene was done on computer.. this means the entire residential neighborhood, a business district... In the computers you don't have limitations for example when a parking structure starts to collapse and the limousine pass through it, that's a great scene.

Flood the Himalayas by a gigantic wave was a real challenge because isn't simple like flood a street, they work with 600 computers everyone making a part of the scene and rendered frame by frame to then composite it into live action

It's not just, you know, 'water rushes through the street'... we're flooding the highest mountain ranges of the whole planet! - Marc Weigert

This video will show you the amazing VFX Scenes and how they do some of the compositing.

Hybrid characters are digitally generated characters that incorporate photographic elements of the real actors as they were filmed on set. For Alice in Wonderland, this was not only a great technique for making the characters look realistic, but also imaginative and fantastic, as illustrated by the Tweedles and Stayne. The most interesting thing about this technique is that it is not merely a likeness, but the real face of the actor which retains their brilliant facial performance. 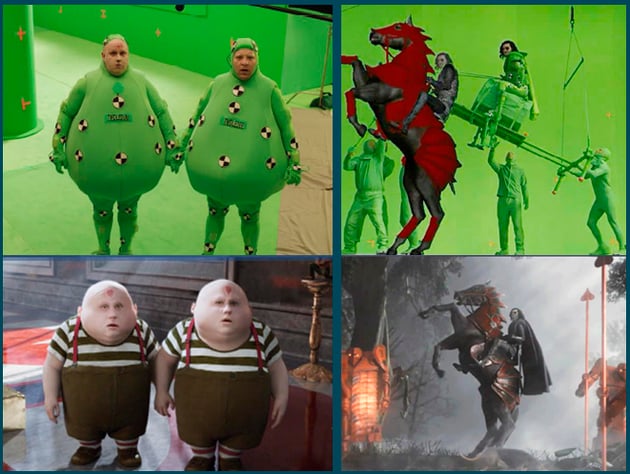 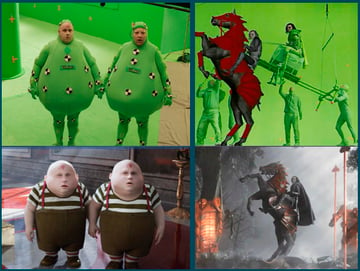 This is one of the most famous techniques used in films; it involves the removal of a color in order to add backgrounds that are entirely constructed using computer-generated imagery. Alice in Wonderland presents a fantastic world with imaginative characters. So when Alice is in this world, nothing is real—everything is filmed on a green screen. This includes not only the environment, but also the people—the technicians, the mechanical effects crew, and anyone else who was visible in frame were all in green too.

The green-screen color is effective for compositing, but visually and psychologically exhausting to be surrounded by it for extended periods of time - Ken Ralston 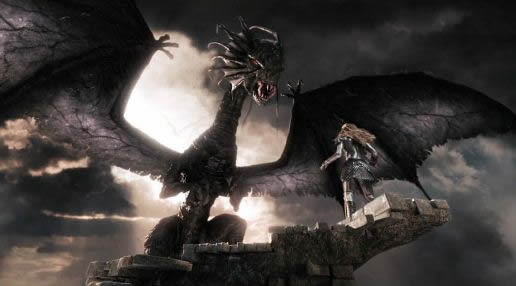 Challenges in this movie

Creating a world in Wonderland, where Alice (who was human) and other curious inhabitants, such as the Red Queen, the Tweedles, the Mad Hatter, and the various environments could co-exist believably, was one of the many challenges.

For the Red Queen, the first challenge was to nearly double the size of her head for the entire film. To do this, the Red Queen was photographed with a high-resolution 4K camera on a green screen. The 4K image was then reduced to HD for her body, allowing the full 4K image of her head to be composited onto her HD body.

The environment of the final battle is completely computer generated (CG). It was challenging to shoot Alice battling a monster that was not on the set, and this scene was choreographed many times before it was captured perfectly. 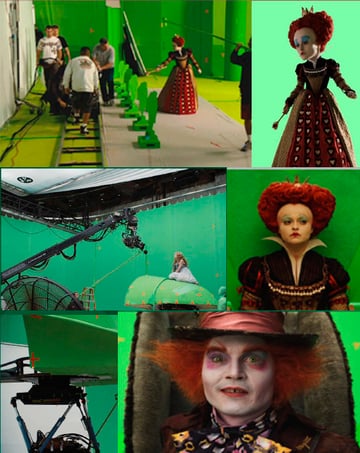 The Characters were created as realistically as possible. To do this, several key departments needed to be firing on all cylinders, from facial and body rigging, to animation and motion capture, to rendering; all these departments worked well as a team to bring these performances to the screen.

A lot of photographs and scans of the actors were used in order to incorporate their details into the digital characters, for both the Na'vi and humans.

There are some characters, such as Jake, where there's both an Avatar double and a digital double. There was a huge amount of data captured through digital scanning and light-stage capture. Also, a lot of extra texture and shade work was done in order to make sure that all the details went into the final renders. 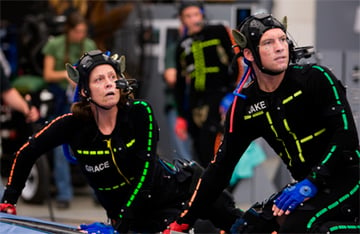 For the Na'vi to be believable, realistic animation was really important. The team used a variety of techniques to get the facial animation to higher level of realism. The most important of these was facial motion capture. With the use of a high-definition video camera attached to the faces of the actors and markers all over their faces, the software was able to map out which muscles in the face were firing, and bring all this information into the digital characters. 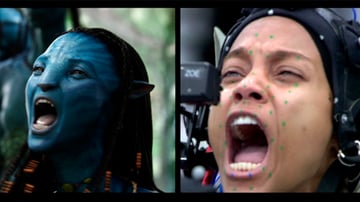 The environments were enhanced by one of the other major features of the film—the fact that it was conceived from the very beginning to be shown in stereoscopic 3D. The live action for the movie was filmed using the Fusion 3D camera system created by James Cameron and Vance Pace, and the stereo shots were composited with a customized version of Shake.

The 3D nature of the movie compromised the used of 2D elements. Matte paintings were a subject of a lot of discussion about finding the most efficient and most realistic ways of creating the environments.

The world of Pandora is a jungle, and many of the visual effects shots feature the jungle in some way. The team built many of the plants using procedural foliage software of their own, but some of them were modeled by hand. Most of them were built at an extremely high resolution; the biggest trees had up to 1.2 million polygons. Any single frame might have had hundreds of thousands of plants rendered in the scene. Efficiency was really important, so the team also built less detailed versions of the plants. This way, the highly detailed plants were close to the camera, and the less detailed ones further away. 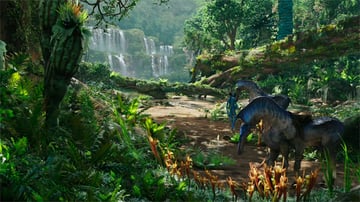 Most of the sets used for The Return of the King were constructed from composite models and matte paintings, which were then combined with CG Imagery. The crew had to use different kinds of computer graphics techniques and computer-controlled cameras to perfectly mesh the miniature model photography with live actors and scenes. 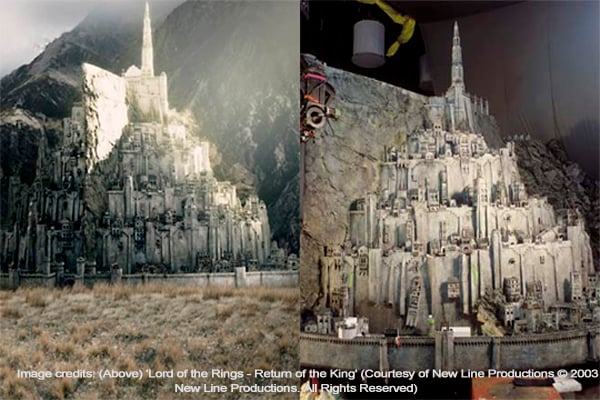 Lots of creatures, such as the Trolls, the Shelob, the Mûmakil and others, were created entirely within a computer. The creators spent months on the designs of sketches, and the sculpting and painting of five-foot maquettes that were scanned into a computer. The animators would then rig skeletons and muscles before animation began. The team also created realistic digital doubles from scans of the actors, and then animated them with motion-capture suites. Making Gollum into a perfectly believable creature, and using sub-surface scattering for skin lighting in order to achieve the proper realism, turned out to be really tricky. 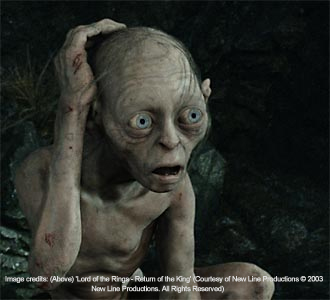 The camera movements in various shots were used for different effects. The objective was to provide two kinds of realism. If you're in the a battle, you want to feel like you’re in there. The way to do that is to make you feel like you’re on a horse; so you want to give the camera a little bit of that movement as if you’re moving forward with it. The other movement effect was used for the Mûmakil. The idea was to shake the camera so as to feel the weight of each of their stomps. Whenever the Mûmakil touched the ground, there would be a camera shake—the closer they were to the camera, the bigger the shake would be.

Sources of the videos:

The Lord of the Rings

Daniel Reinoso
My name is Daniel Reinoso and I'm from Maracaibo, Venezuela. I'm 14 years old and After Effects, Photoshop and Premiere Pro have been hobbies of mine for a number of years now.
Looking for something to help kick start your next project?
Envato Market has a range of items for sale to help get you started.